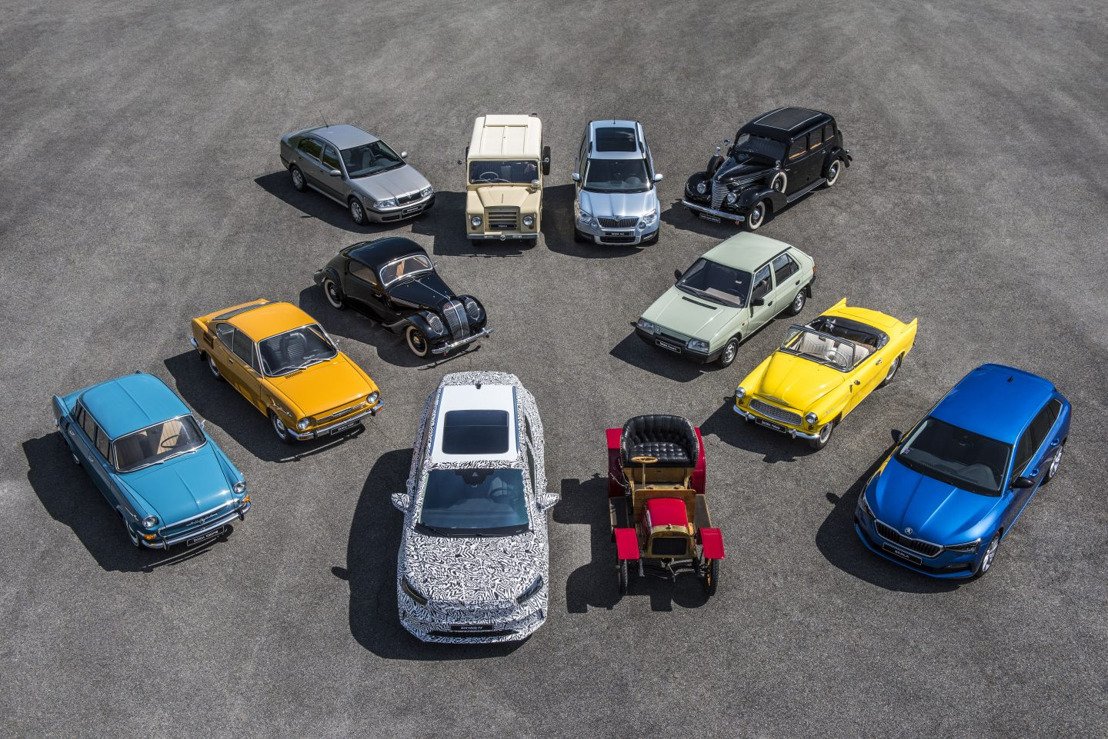 Mladá Boleslav, 4 August 2020 – ŠKODA AUTO is taking an extraordinary journey through 125 years of company history with twelve automotive milestones. The motorcade, featuring some of the Czech car manufacturer’s most important models, around the company’s headquarters in Mladá Boleslav is a highlight of the company’s 125th -anniversary celebrations. The selected vehicles range from the L&K Voiturette A, the brand’s first car dating back to 1905, to the still camouflaged ŠKODA ENYAQ iV. The new electric SUV will be officially presented later this year and heralds the start of a new era for ŠKODA. It combines the ideas, innovations and influences from ŠKODA’s 125-year corporate history in one vehicle.

Starting out from the ŠKODA Museum at the company’s headquarters in Mladá Boleslav, where some of these vehicles are on display as exhibits, the journey through time continues around the town. The route takes the twelve historical models past Mcely Chateau and Loučeň among other sites. ŠKODA’s test centre in Úhelnice is also on the planned circuit.

Everything begins with the L&K Voiturette A

The foundation stone for ŠKODA AUTO’s success story was laid by the founding fathers Laurin and Klement in 1905 with the L&K Voiturette A. It was the company’s first automobile ten years after the company, which began by producing bicycles and later motorbikes, was founded. Highlights from the 1930s include the impressive ŠKODA SUPERB, which was the brand’s flagship model even at that time, offering a spacious interior and a high level of driving comfort, and the ŠKODA POPULAR MONTE CARLO, which, thanks to its transaxle design with a transmission on the rear axle, had outstanding handling characteristics. It was in honour of this special model, which celebrated victories at the legendary Monte Carlo Rally, that ŠKODA introduced the MONTE CARLO designation that still denotes the sporty model versions of the FABIA, SCALA and KAMIQ today. Just like the POPULAR MONTE CARLO, the ŠKODA FELICIA from 1959 is also a design icon. ŠKODA reinvented itself visually with the convertible, reflecting a style that was the height of fashion at the time.

Three models from the 1960s are also in the line-up. In 1964 ŠKODA introduced a self-supporting body in the revolutionary ŠKODA 1000 MB, thus ushering in the era of the rear engine. The engine block was produced using a patented aluminium die-casting process and underlines the high level of mechanical engineering expertise at the Mladá Boleslav site. The drive concept with rear engine and rear-wheel drive was also utilised in the ŠKODA 110 R from 1970. The ŠKODA 130 RS, which was successful both in rallies and on circuits, later built on the sporty two-door coupé and is still remembered today in ŠKODA’s sporty RS models. Based on the original OCTAVIA, the TREKKA, which was built in New Zealand starting in 1966, is an early forerunner of today’s SUVs. The offroader was tailor-made to meet customer needs and requirements specific to the market.

Front-wheel drive and debut of the modern OCTAVIA

Another milestone in the historical cavalcade is the ŠKODA FAVORIT. In 1987 ŠKODA launched the front-wheel drive with the compact model designed by Bertone and offered COMBI and PICKUP variants in addition to a hatchback. The 1996 OCTAVIA was the first ŠKODA model to be developed wholly under the umbrella of the Volkswagen Group, paving the way for the company to become a volume manufacturer. Its spaciousness and attractive price-performance ratio subsequently become an integral part of ŠKODA’s product identity. The ŠKODA YETI marked the brand’s successful entry into the SUV segment in 2009. This segment, in which the KAMIQ, KAROQ, KODIAQ and the upcoming ENYAQ iV form a complete SUV family today, is opening up new customer groups for the brand. The YETI also enjoyed great popularity thanks to its many innovative Simply Clever ideas, such as the individually adjustable VarioFlex seats. ŠKODA introduced a new design language with the SCALA in 2018 and now offers an even more emotive exterior in addition to the generous space characteristic of the brand. At the same time, the manufacturer took a leap forward in the area of connectivity – the SCALA is the first ŠKODA ‘always online’.

Just as the other eleven milestones have shaped their eras, the new ŠKODA ENYAQ iV will have a significant impact on the coming years. It combines all ŠKODA’s virtues such as ingenuity, inventiveness, design expertise and boldness with forward-looking technologies. It represents the essence of all the brand values; it is surprising, practical, and Simply Clever. The ENYAQ iV is the result of 125 years of development experience, creativity and passion and is leading the company towards a sustainable and electric future. The world premiere will take place in the second half of the year, and the market launch is set for the first quarter of 2021.

Comments on the journey through time with twelve milestones spanning 125 years of corporate history:

Christian Strube, ŠKODA AUTO board member for technical development: “Each of these special models from ŠKODA’s 125-year history has significantly influenced the company’s development. Many of our brand values have a long-standing tradition. For example, the high driving comfort goes back to the first ŠKODA SUPERB, the extraordinary design can be found in the ŠKODA FELICIA, modern body construction shaped the ŠKODA 1000 MB and the first modern OCTAVIA won over the public with its generous space. With the new ENYAQ iV, the modular electrification toolkit gives us the opportunity to combine all these virtues into one vehicle that is locally emission-free and therefore particularly sustainable with its 100% battery-powered drive”.

Björn Kröll, Head of ŠKODA Product Marketing: “ŠKODA can look back on 125 years of history and has produced many iconic vehicles during this time. Each new vehicle is based on the experience gained through developing and driving previous models. The ENYAQ iV is the quintessence of all this knowledge, but at the same time, it also brings new ideas to the vehicle that are exciting and Simply Clever. As our first purely batteryelectric vehicle designed as such from the outset, the ENYAQ iV is taking our company into a new era.”

Michal Velebný, ŠKODA Museum: “This excursion featuring twelve milestones from ŠKODA’s history is an extraordinary event for us. Each of these vehicles tells its own story, but all the vehicles together impressively document the 125-year history of ŠKODA AUTO. It is a very special moment to see all these treasures in action in this setting – and not just for us at the ŠKODA Museum.”