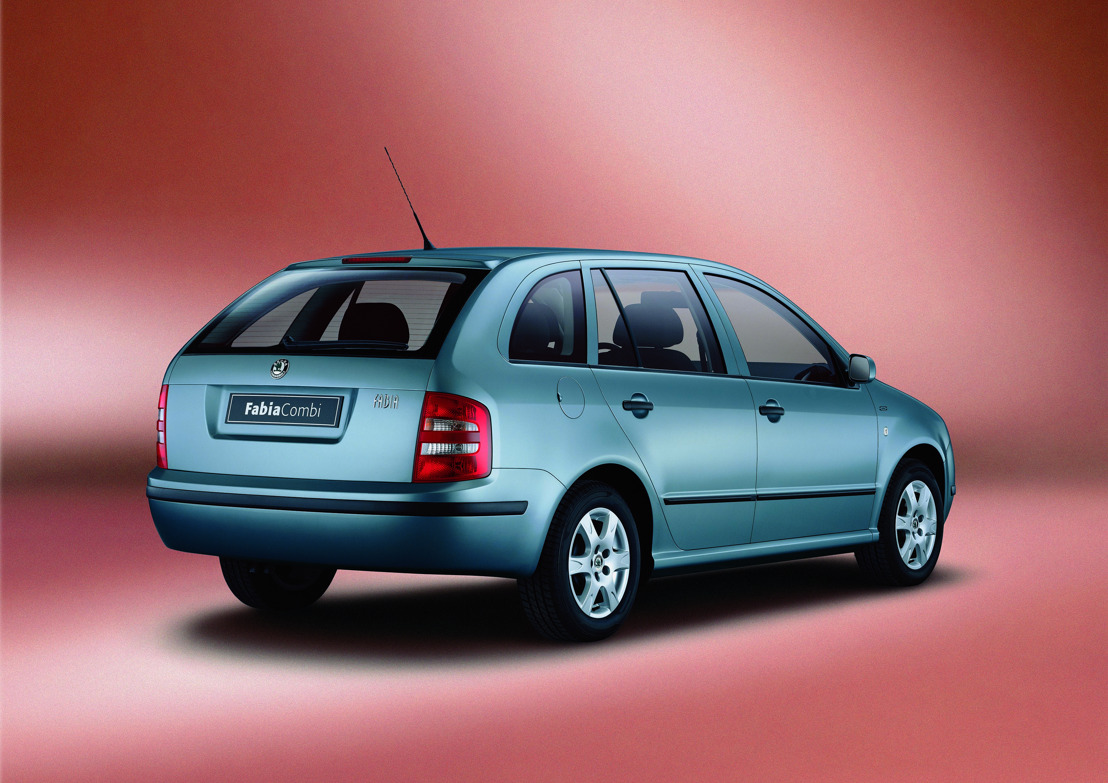 Mladá Boleslav, 18 September 2020 – A special birthday for the ŠKODA FABIA COMBI: The success story of the estate version of the ŠKODA FABIA began 20 years ago with its premiere at the Paris Motor Show. The first generation of the FABIA COMBI, which was launched one year after the hatchback version of the first FABIA and was voted “Car of the Year 2001” in the Czech Republic, won over many fans with its greatest strength: It was one of the few estate cars in the small car segment to offer lots of space for passengers and a boot capacity increasing from 426 to 1,225 litres at total body length of just 4.22 metres – values which increased in the models of subsequent generations. Combined with an excellent price-performance ratio, its spaciousness has been making the FABIA COMBI a popular everyday companion, especially among young families, for two decades.

To date, ŠKODA has produced 1.5 million units of the FABIA COMBI, including the PRAKTIK commercial vehicle variant. This means that the COMBI has a share of 34 per cent of all FABIAs delivered across three generations. In addition to its exceptional space, the FABIA COMBI has proven its worth for two decades with modern technologies, a wide range of engines and numerous equipment options. ŠKODA also offers special model variants, for example, for lovers of vehicles with robust off-road flair and sports fans.

Six engines, extensive equipment and an especially practical offshoot from the start

The first generation of the ŠKODA FABIA COMBI, which was built from 2000 to 2006, won over customers not only with its generous space but also its extensive standard equipment and numerous modern options. A navigation system, cruise control, parking sensors at the rear, the electronic stability control ESC and automatic climate control including cooling for the glove compartment were already available at that time. The swivelling cup holder for the driver was a forerunner of later Simply Clever ideas. In terms of powertrains, four petrol engines with 1.4- and 2.0-litre displacement and outputs ranging from 44 kW (60 hp) to 85 kW (115 hp) were available in the first model year. ŠKODA also offered two 1.9-litre diesel engines with 47 kW (64 hp) or turbocharged with an output of 74 kW (100 hp). The first-generation FABIA COMBI was also available as the PRAKTIK commercial vehicle variant. The successor to the FORMAN PRAKTIK had two seats and a cargo area divided by a fixed partition. Sheet metal panels in the same colour as the vehicle replaced the rear side windows, and the load area could be accessed through the tailgate or the right-hand rear side door.

With off-road styling: The FABIA COMBI as the SCOUT and SCOUTLINE

ŠKODA offered the FABIA COMBI in the SCOUT model variant from the second generation onwards (2007 to 2013). Plastic trim in grey and silver at the front and rear as well as on the wheel arch linings and side skirts characterised the robust look of the model, which came with 16-inch alloy wheels as standard. The interior, too, was based on the successful SCOUT models from other series, with specific seat covers and decorative trims. Pump-nozzle diesel engines with 1.4- and 1.9-litre displacement and 59 kW (80 hp) or 77 kW (105 hp) and petrol engines with 63 kW (85 hp) or 77 kW (105 hp) delivered power to the front wheels via manual 5-speed transmissions or a 6-speed automatic. A poor-road package with increased ground clearance was also available on request. In the current third generation of the FABIA COMBI, this equipment variant bears the name SCOUTLINE and features similar details: a unique front spoiler and a robust, matt black rear bumper with silver trim, matt black wheel arch linings and side skirts, exterior mirrors and roof rails in silver and 16-inch alloy wheels. The front-wheel-drive FABIA COMBI SCOUTLINE is available with all engines in the range.

The ŠKODA FABIA COMBI also has a sporty side, especially as the RS version. In the second generation of the FABIA, the letter combination standing for “Rally Sport” is used on the COMBI as well as the hatchback model. It features the characteristic RS sports look and, thanks to a doublecharged 1.4 TSI engine, offers outstanding driving dynamics. The combination of a mechanical supercharger and a turbocharger provides an output of 132 kW (180 hp). The top model of the series, offered from 2010 to 2014, had a 7-speed DSG as standard. The MONTE CARLO models, which have been part of the FABIA COMBI model range since the second generation, also reflect the brand’s rally history. They have a sporty exterior with striking black accents and sports suspension. The predominantly black interior comes with sports seats, and in the current model with integrated headrests and red trim, a leather sports steering wheel and exclusive decorative strips and accessories.

It keeps on growing: the FABIA COMBI – a revolution in space

The series’ exceptionally generous space has been a distinguishing feature of the ŠKODA FABIA COMBI for twenty years now. The minimum capacity of the boot has increased by more than 100 litres during this period. The first generation of the FABIA COMBI offered a boot capacity of at least 426 litres, which could be extended to 1,225 litres by folding down the rear seats. With the introduction of the second generation, the basic volume increased to 480 litres; the maximum volume rose by an impressive 235 litres to a total of 1,460 litres and thus to a level otherwise only found in compact-class vehicles. The third generation was presented in 2014 and finally established the FABIA as a vehicle for longer distances with full seat occupancy. The luggage compartment volume grew by a further 50 litres to 530 litres when the rear seat is in place, bringing the luggage compartment up to the dimensions of mid-size estates.

An overview of the FABIA COMBI generations: