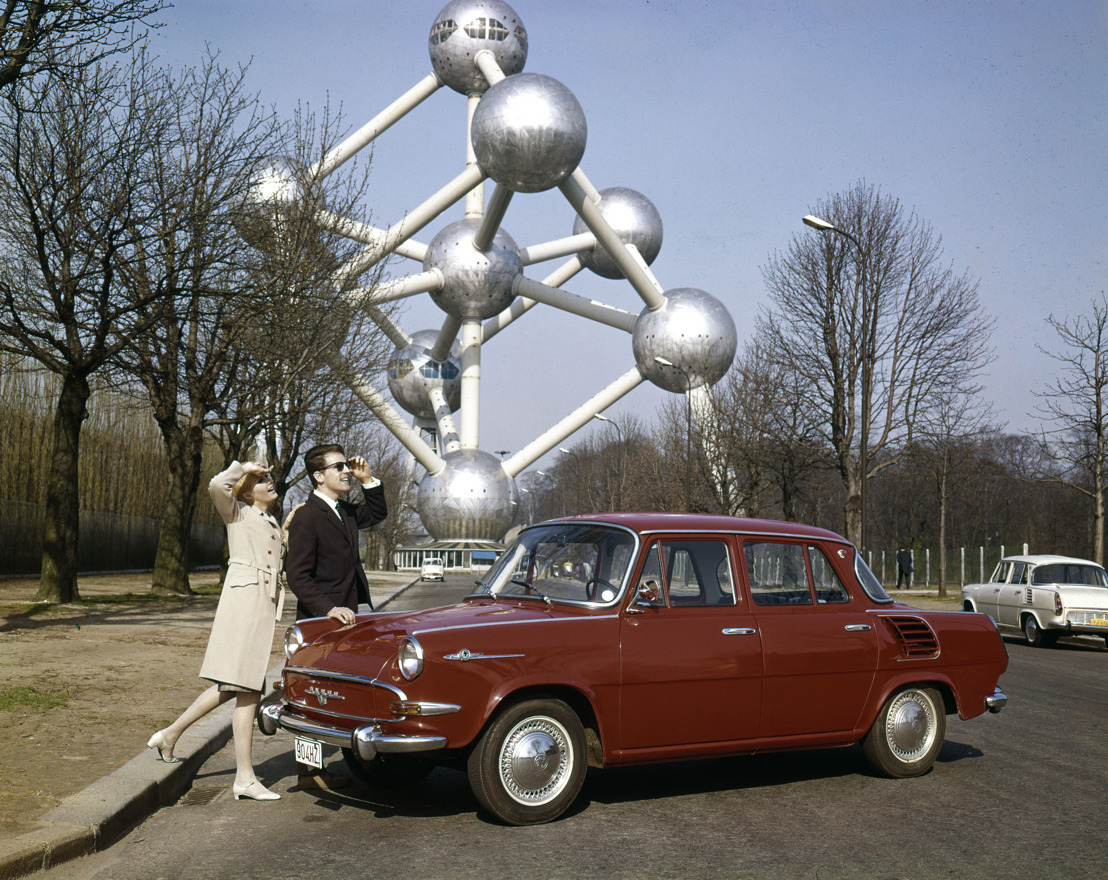 in the history of the Czech automobile manufacturer. The compact car benefitted from a selfsupporting

automobile plant in Mladá Boleslav. In the spring of 1964, it replaced the popular ŠKODA OCTAVIA

and with it the classic drive concept with a front engine and rear-wheel drive. The 1000 MB featured

a very modern 1.0-litre four-cylinder engine in the rear of its particularly light, self-supporting body.

In addition, the state-of-the-art model was produced in a new part of the ŠKODA plant in Mladá

Boleslav, which used cutting edge technologies like for example a special die-casting process.

More than 300 companies, including 134 from abroad, were involved in constructing and equipping

the more than 40 halls and other buildings. The plant was now among the most modern automobile

factories, also setting standards beyond the borders of the communist countries. A new, 13-

led to a marshalling yard, and eleven kilometres overhead conveyor. The four-door body of the

crankcase as well as the four-speed manual transmission, which was unique in Europe. It was

based on a patent registered by the Czech engineer Josef Polák in 1922. At the same time, the

– threads in the castings simply needed to be cut. This contributed to shorter production times and

Tests under extreme conditions in the former Soviet Union

car’) in the development phase. Before the start of series production, it was put through its paces.

cold of the former Soviet Union. The tests on the brake, fuel and cooling systems took place in the

Caucasus, where three vehicles had to perform in extreme temperatures of up to 45 degrees

The compact car with self-supporting body

Following its successful predecessor, the chassis-based OCTAVIA with a front engine and rearwheel

drive, the ŠKODA 1000 MB took off with an entirely new concept: It had a self-supporting

body with all-round independent wheel suspension. Thanks to its advanced design and the

consistent use of aluminium alloys, the family car weighed in at only 755 kilograms.

The water-cooled OHV in-line four-cylinder was shifted to the rear and drove the rear axle. The light

ŠKODA design took a leap forward with the 1000 MB, building on the classic, three-wheeled body

layout of the 1960s with timeless elegance. The large panoramic rear window improved the allaround

visibility at the rear. The design of the fuel filler neck also testifies to the attention to detail:

it was cleverly concealed in the right-side wing by a swivelling ŠKODA emblem.

MB boasted a very spacious and functional interior. For example, as standard, the seats could be

transformed into a mobile accommodation option. The car featured with two luggage

compartments: the one behind the rear seats was also accessible while on the road; the one at the

front of the car had a capacity of 220 litres and sat above the spare wheel. To access this, only a

portion of the front had to be folded forward – without needing to first unload the luggage.

11 April 1964 in Mladá Boleslav. In September of the same year, the new model was introduced to

the general public at the traditional engineering fair in Brno, and in October the compact was

presented at the motor shows in Paris and London. In May 1965, more than 1,000 vehicles were

rolling off the assembly line each month. By the end of the year, the company had been able to

ramp up its daily production to at least 150 units, making the 1000 MB the first Czech vehicle to be

went to several dozen countries around the world. In 1965, for example, the proportion exported