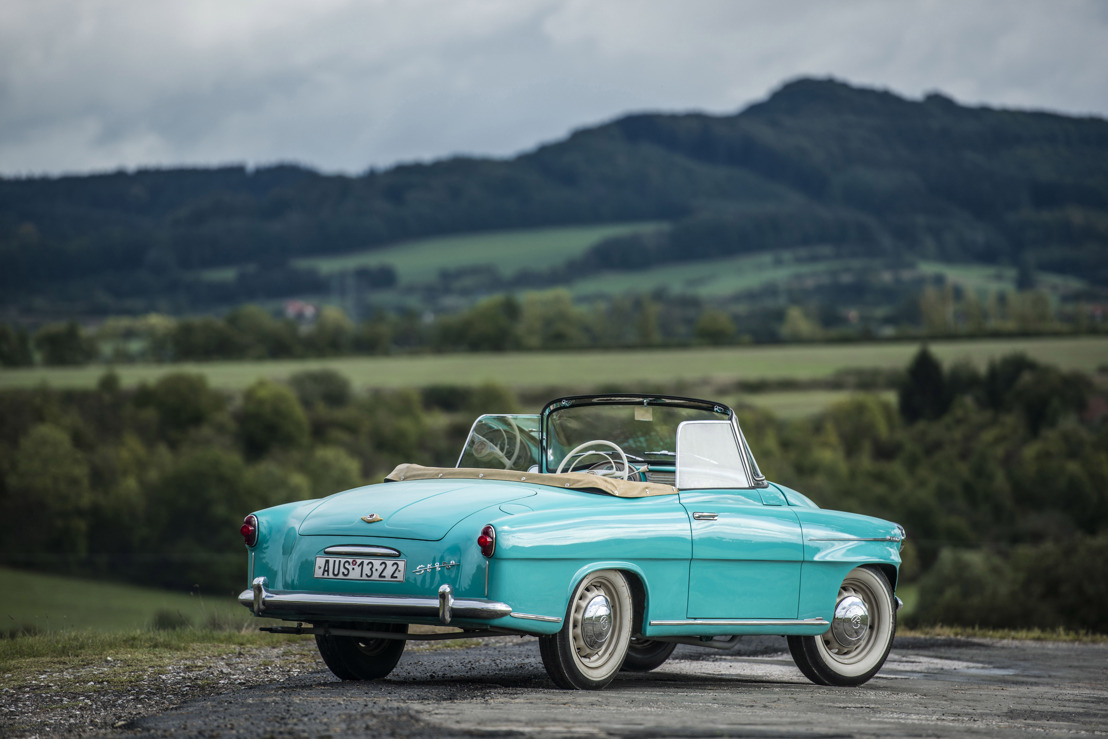 Mladá Boleslav, 25 September 2017 – ŠKODA AUTO is celebrating the birthday of a groundbreaking model: exactly 60 years ago, in September 1957, the ŠKODA 450 made its debut at the Mechanical Engineering Trade Fair in Brno. The elegant roadster featured a folding roof and stood out thanks to its attractive, sporty design. The model rolled off the production line at the Kvasiny plant and was predominantly destined for demanding international markets including Germany, the United Kingdom and the USA. In 1959, the long-established Czech brand introduced the extremely popular successor, the ŠKODA FELICIA Cabriolet.

In September 1957, the largest Czech car manufacturer offered a particular highlight to the more than 1.6 million visitors of the third Czech Mechanical Engineering Trade Fair: the new ŠKODA 450 roadster. The production model was very closely based on the ŠKODA 440 roadster design study, which the car manufacturer had presented to the public in the same place one year earlier. In October 1957, the ŠKODA 450 also created a sensation outside of Czechoslovakia: at its debut at the Motor Show in London, the roadster shared centre stage with the incumbent Miss USA, Charlotte Sheffield (1936–2016). Renowned photographer Vilém Heckel shot the ŠKODA 450 and the beauty queen together. To date, this series of pictures is considered to be amongst the crème de la crème of Czechoslovakian advertising photography.

The ŠKODA 450 was the top-of-the-range variant in the 440-445-450 model series. The model designation originated from the number of cylinders and the engine’s power output of 50 PS (36.8 kW). The longitudinally mounted, four-cylinder engine drove the rear wheels. Thanks to its innovative chassis design with independent suspension, passengers benefited from the roadster’s comfortable ride, even on rougher roads. Besides its attractive design, the spacious interior and the practical, folding roof contributed to the 2+2-seater’s popularity. Both the driver and front passenger sat on a one-piece bench seat. The individually folding backrests made for easy access to the two rear seats.

With a kerb weight of 930 kg and dimensions (LxWxH) of 4.07x1.60x1.38 m, the ŠKODA 450 accelerated up to 128 km/h. The 1,089-cc four-cylinder was equipped with two carburettors and made do with an average of nine litres of petrol per 100 km. The driver could engage each of the gears in the 4-speed gearbox using the lever built into the steering column.

Up to the end of 1957, the first ten pre-series ŠKODA 450 models were produced at the Kvasiny plant and series production began in the summer of 1958. By the end of production, ŠKODA had manufactured a total of 1,010 of the roadsters. Around two thirds of all ŠKODA 450s produced went to customers abroad. Particularly remarkable is the fact that ŠKODA exported 408 of this vehicle type to the USA, which, at the time, was a unique accomplishment for a product from an Eastern bloc state. In Czechoslovakia, the ŠKODA 450 signalled a turning point in the automotive market. This was because it was one of the first models that customers could buy on the free market without having to wait several years for the necessary coupon like they usually had to before. The price of the ŠKODA 450 was 42,000 korunas. This made the roadster considerably cheaper than the competition’s models, which were also available without a coupon: for a GAZ 21, customers had to pay 55,000 korunas and the Tatra 603 cost as much as 98,000 korunas. In addition, the ŠKODA 450 impressed with a higher level of practicality in comparison to its rivals.

With the ŠKODA FELICIA, the successor to the 450 rolled off the production line in Kvasiny at the start of 1959. The new model successively benefited from several technical developments. For example, ŠKODA replaced the front axle’s transverse leaf springs with coil springs. Other changes included the newly designed dashboard and the sporty, central gear lever which was now mounted on the transmission tunnel. The rear fins, which at the time were state-of-the-art, were also a real eye-catcher. By 1964, ŠKODA had produced a total of 14,863 FELICIAs. This also included the open-top sports car variant, the FELICIA SUPER, which came with the choice of a folding roof or a hardtop and was predominantly intended for export. With its combination of timeless, elegant design and more robust and reliable technology, the FELICIA is one of the most important icons in ŠKODA’s company history to date. The model ranks as one of the most coveted classic cars from the Czech post-war era.