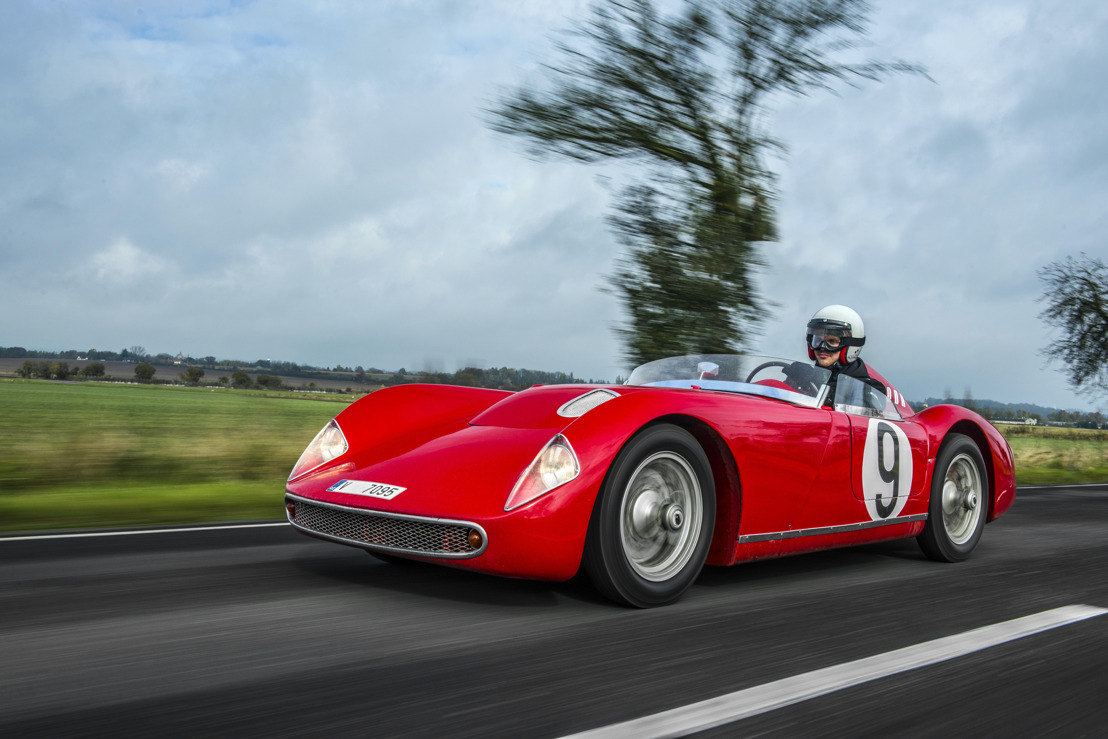 Mladá Boleslav, 30 November 2017 – ŠKODA built the first example of the sports prototype ŠKODA 1100 OHC 60 years ago. The open-top two-seat racing car with the internal type designation 968 demonstrated a number of ground-breaking technical innovations. ŠKODA initially produced two open-top vehicles intended for long-distance races. In 1959, two coupés were built on this basis. One of the red open-top racers is among the highlights of the ŠKODA Museum in Mladá Boleslav.

"The ŠKODA 1100 OHC is a prime example of Czech engineering and construction," says Andrea Frydlová, Director of the ŠKODA Museum. "The car is one of the milestones in ŠKODA's 116-year involvement in motorsport. "

ŠKODA began developing the two-seater in the spring of 1956. The ŠKODA 1100 OHC is powered by a longitudinally front-mounted inline four-cylinder with two camshafts in the cylinder head. With a displacement of 1089 cc, it has an output of 92 hp at 7700 rpm; the maximum engine speed is 8500/min. An output of 85 hp was spectacular at the time. As fuel, ŠKODA used high-octane aviation fuel.

With a wheelbase of 2,200 millimetres, a total length of 3,880 millimetres, a width of 1,430 millimetres and standing only 964 millimetres tall, the racing car is exceptionally flat and stretched. Thanks to its very lightweight body made of glass fibre reinforced plastic (GRP), the open-top ŠKODA 1100 OHC weighs just 550 kilograms. This extremely lightweight design contributes significantly to its tremendous acceleration and top speed of 190 to 200 km/h, depending on the axle ratio. Just as important is the low air resistance of the body. In the early stages of development, the racing car still had retractable folding headlights, but these soon had to give way to a more practical solution: fixed headlights with aerodynamic covers made of Plexiglas.

Unlike the predecessor models ŠKODA SPORT and SUPERSPORT, which were based on the robust chassis of the production model ŠKODA 1101, the 1100 OHC is a prototype. The structural basis is a latticed tube frame welded from thin-walled tubes. The car owes its excellent handling characteristics to its near-perfect weight distribution: with a 75-kilogram driver, the ratio is 49.7 to 50.3 percent in favour of the driven rear axle. The clutch, the five-speed gearbox and the transfer case are located at the back and form a single assembly unit. At the front, the wheels were mounted on a trapezoidal wishbone axle; at the rear, on a pendulum axle with trailing arms. The torsion bar suspension of the 15-inch spoked wheels were state-of-the-art technology in the late 1950s.

The sports car’s first appearance resulted in its first win. The experienced factory driver Miroslav Fousek won a race on the municipal circuit in Mladá Boleslav at the wheel of the ŠKODA 1100

OHC at the end of June 1958. In addition to victories at local sporting events, other drivers achieved success in other countries. Due to the difficult political situation in the late 1950s and early 1960s, the racing cars from Mladá Boleslav were limited to competing in socialist countries.

In addition to the two open-top vehicles with GRP body built at the end of 1957, ŠKODA also produced two 1100 OHC Coupés in 1959 with a closed aluminium body. Even with this version, the engineers were able to achieve a very low total weight of only 618 kilograms while maintaining the outstanding performance of the open-top version.

Both of the coupés were badly damaged in accidents on public roads. Restorers at the ŠKODA Museum are currently working intensively on renovating a ŠKODA 1100 OHC Coupé based on the preserved chassis and the drivetrain of one of the vehicles.

One of the ŠKODA 1100 OHC is owned by the British importer ŠKODA UK, which mainly uses it at events in the United Kingdom. The other racing car usually stands in the ŠKODA Museum at the brand’s headquarters in the Bohemian town of Mladá Boleslav – unless it is participating in national and international vintage car events.

Note to editors: More photos of the ŠKODA 1100 OHC is available at https://www.skoda-storyboard.com/.