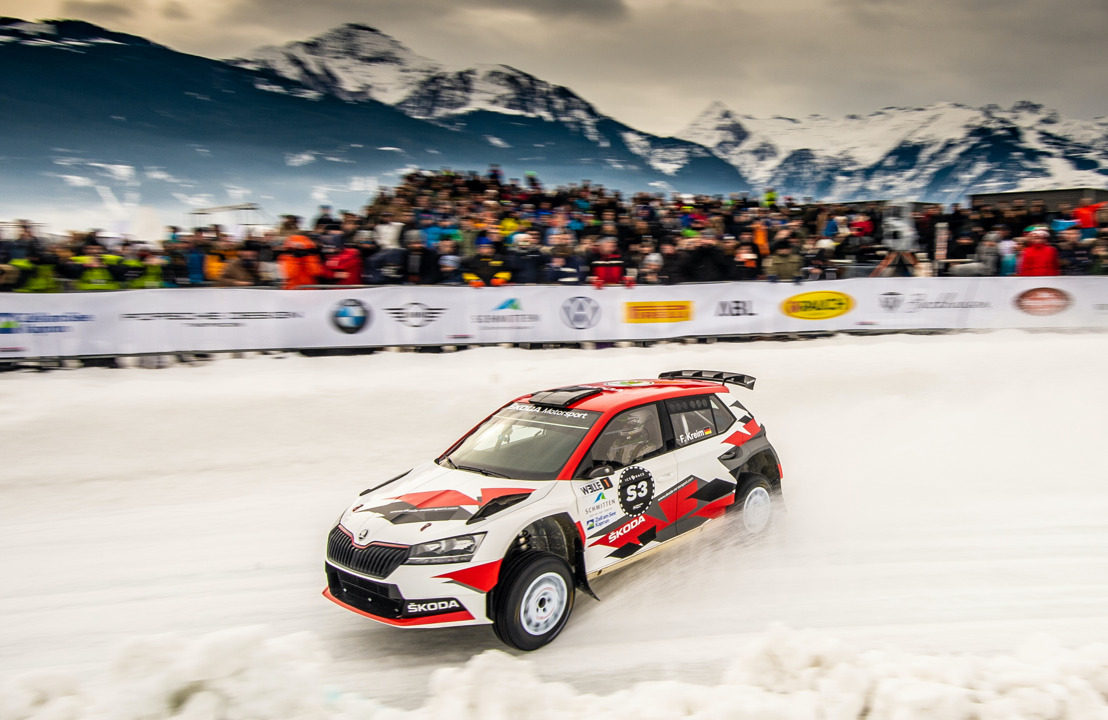 Zell am See, 2. February 2020 – ŠKODA drivers were entertaining around 16.000 race and
rally fans at the GP Ice Race at Austria’s Zell am See-Kaprun (01–02 February 2020).
Alternating at the wheel of some 290 hp strong all-wheel driven ŠKODA FABIA Rally2 evo in
a competition called “Ice Race of Champions”, three title winners and once vice champion
were fighting for the victory. In the addition of both days with one victory and one second
place German Rally Champion Fabian Kreim was the quickest driver and won ahead of
Julian Wagner (AUT). Martin Koči (Slovakia) finished third ahead of Filip Mareš from the
Czech Republic.

During the first weekend of February, the unique GP Ice Race featured stunning action with roughly
150 drivers in historic and modern race and rally cars. Filip Mareš from Czech Republic (2019
Junior Rally Champion/ERC1), Martin Koči (Slovakian Rally Champion), Fabian Kreim (Winner of
the German Rally Championship) all won titles in 2019. Austrian local hero Julian Wagner finished
the Austrian Rally Championship 2019 as runner-up. To battle for the “Ice Race of Champions”
victory – each of them was on equal terms in driving a ŠKODA FABIA Rally2 evo, technically
identical and prepared by the factory team.

To win the “Ice Race of Champions”, the results of the Saturday and Sunday races were added.
With one victory on Saturday and a second place on Sunday, Fabian Kreim took the overall victory
ahead of Julian Wagner who was third quickest on the first day and took a victory on Sunday. With
second and a fourth place, Martin Koči took the last position on the podium. For the fourth placed
Filip Mareš, the GP Ice Race was a welcomed opportunity to prepare himself for driving on ice and
snow. The European Junior Rally Champion (ERC1) will compete with a private entered ŠKODA
FABIA Rally2 evo at the upcoming Rally Sweden (13/02/–16/02/2020).

Jan Kopecký, 2019 GP Ice Race category winner with a ŠKODA FABIA, WRC2 Champion of 2018
and seven times Czech Rally Champion, enjoyed a new role at the GP Ice Race 2020 as a coach
for the young guns and entertained the crowd with demonstration runs on a ŠKODA FABIA Rally2
evo.

The ŠKODA FABIA R5 evo, a high-tech 4x4, was homologated by the International Automobile Federation (FIA) on 1 April 2019. The Czech really car is successfully continuing the long tradition of ŠKODA Motorsport.
ŠKODA has been successful on the motorsport scene since 1901. Be it on the circuit or in rallies, ŠKODA has
celebrated victories and won titles all around the world. Historical highlights include winning the title in the FIA World Rally Championship (WRC2) for the first time in 2016, numerous title wins in the FIA European Rally Championship (ERC), the FIA Asia-Pacific Rally Championship (APRC) and the Intercontinental Rally Challenge (IRC) as well as the victory in the European Touring Car Championship in 1981. ŠKODA teams have also triumphed in the world’s oldest and most famous rally, taking several class victories in the legendary Monte Carlo, which was first held in 1911.