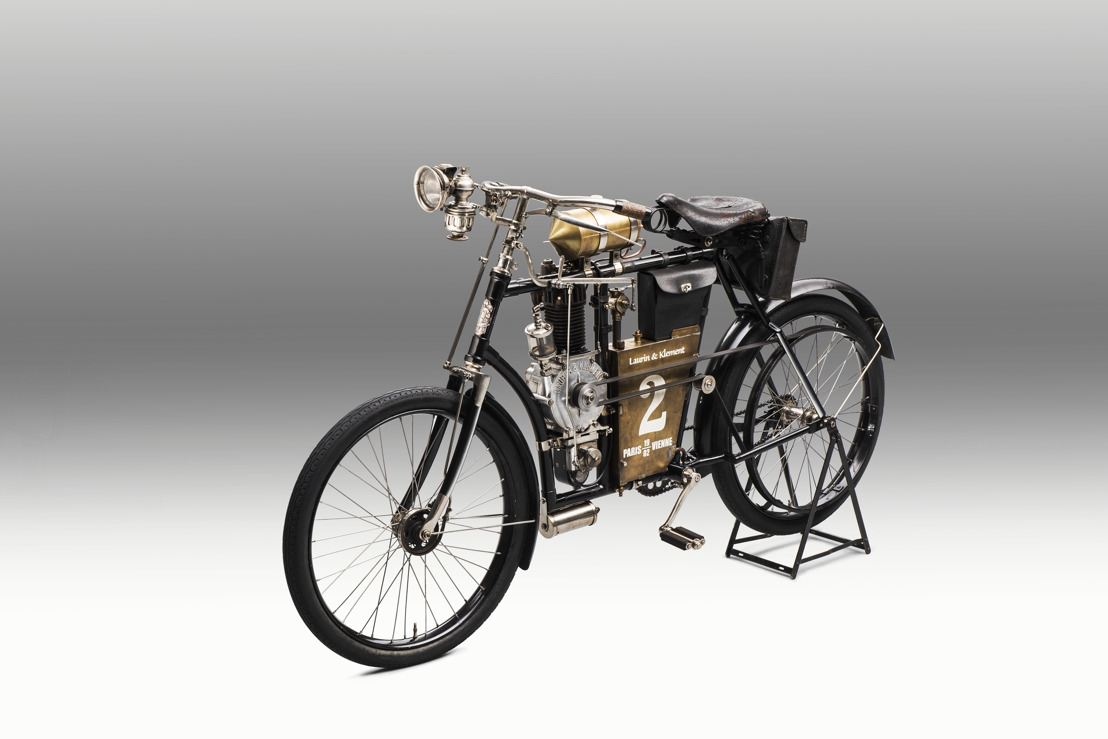 Mladá Boleslav, 26 February 2021 – Laurin & Klement’s second motorbike model, the SLAVIA B, plays a very special role in Laurin & Klement’s corporate history: it was the first motorbike that the Mladá Boleslav-based company entered in an international race in 1901. The long-distance race from Paris to Berlin was considered the toughest challenge of its time. Factory rider Narcis Podsedníček made history on his first attempt: he was the only participant in his class to reach the finish line but was never declared the winner.

When courage and fearlessness combine with a little insanity, the scene is set for legendary success – as was the case in the early days of motorsport at the beginning of the 20th century. At that time, determined pioneers systematically broke new ground and pushed the limits of what was possible and achievable – always with a firm belief in technological progress.

Václav Laurin and Václav Klement, the founders of the eponymous bicycle manufacturer from Mladá Boleslav in Bohemia, were among these visionaries. Besides their commitment to offering high-quality and affordable bicycles, they were also united by their passion for racing. The company, founded in 1895 as a small repair workshop, quickly took off: after only one year, the pair employed 21 people and were marketing five different bicycle models featuring the ‘SLAVIA’ label.

Just four years later, on 18 November 1899, the young company presented its first two motorbikes, the SLAVIA A and SLAVIA B. To improve the handling and stability of the bikes, the engine was installed in the lower part of the frame. This design is standard today, but back then, the brainchild of the ingenious engineer Václav Laurin was a true sensation. Thanks in part to Václav Klement’s entrepreneurial vision and keen business sense, the manufacturer expanded rapidly in the following years: the professional bookseller secured large orders in his own country and at the same time raised Laurin & Klement’s profile in important industrial nations such as Germany and Great Britain. Successes in long-distance races attracted a lot of international attention at the time and served Václav Klement as a means to an end.

The “motorised two-wheelers” from Mladá Boleslav made their motorsport debut in 1901 at the biggest event of the time, the race from Paris via Aachen and Hanover to Berlin. The 1,196-kilometre route was a great challenge for man and machine. Works rider Narcis Podsedníček started the three-day race for Laurin & Klement as one of ten participants in the two- and three-wheeler categories. He had already established a career at the company and, thanks to his dedication and outstanding expertise, had quickly risen from toolmaker to sales representative. At the peak of his career, Podsedníček later became the production manager.

The course mostly covered unpaved roads and cobblestones, and there were hoof nails everywhere, causing numerous punctures. In the end, 48 out of 110 vehicles made it to the finish line. Although Podsedníček had been considered an outsider at best in the run-up to the race, he reached Berlin first in his class on the Laurin & Klement motorcycle. His class victory was also surprising because no one was expecting him when he crossed the finish line at three o’clock in the morning: The timekeeping office was closed, and no race commissioners were on duty.

Podsedníček’s arrival was initially confirmed by local police officers. However, the organiser did not acknowledge the guards’ records and instead chose four Frenchmen on De Dion-Bouton tricycles as the winners, leaving Podsedníček with only a moral victory.

However, these achievements earned his outstanding personal performance and the Laurin & Klement brand a great deal of international attention and enhanced the reputation of the young brand, which presented its first automobile in 1905: The proverbial starting signal for the manufacturer’s future, hugely successful involvement in motorsport.

The Laurin & Klement SLAVIA Type B motorbike The company started producing the Laurin & Klement SLAVIA B in 1899. That November, the motorycycle made its debut at the bicycle racetrack in Prague-Bubny alongside the Type A. The Type B had an air-cooled singlecylinder engine that generated a power output of 1.75 hp from a displacement of 240 cc; the top speed was 40 km/h. As was typical at the time, the motorbike did not have a gearbox; the engine drove the rear wheel directly using a flat leather belt. The riders had to pedal to start the chain-based starter and auxiliary drive themselves. By 1904, Laurin & Klement had built a total of 540 units of the SLAVIA B in Mladá Boleslav.

In 1956, this historic motorbike was given a special honour: it was featured in ‘Vintage Car’ (Dědeček Automobil), a film that offers a perspective on the ‘automotive century’. The script was based on the eponymous book by Adolf Branald.

Find out more: History of engine development and production in Mladá Boleslav (1899 - 2019)