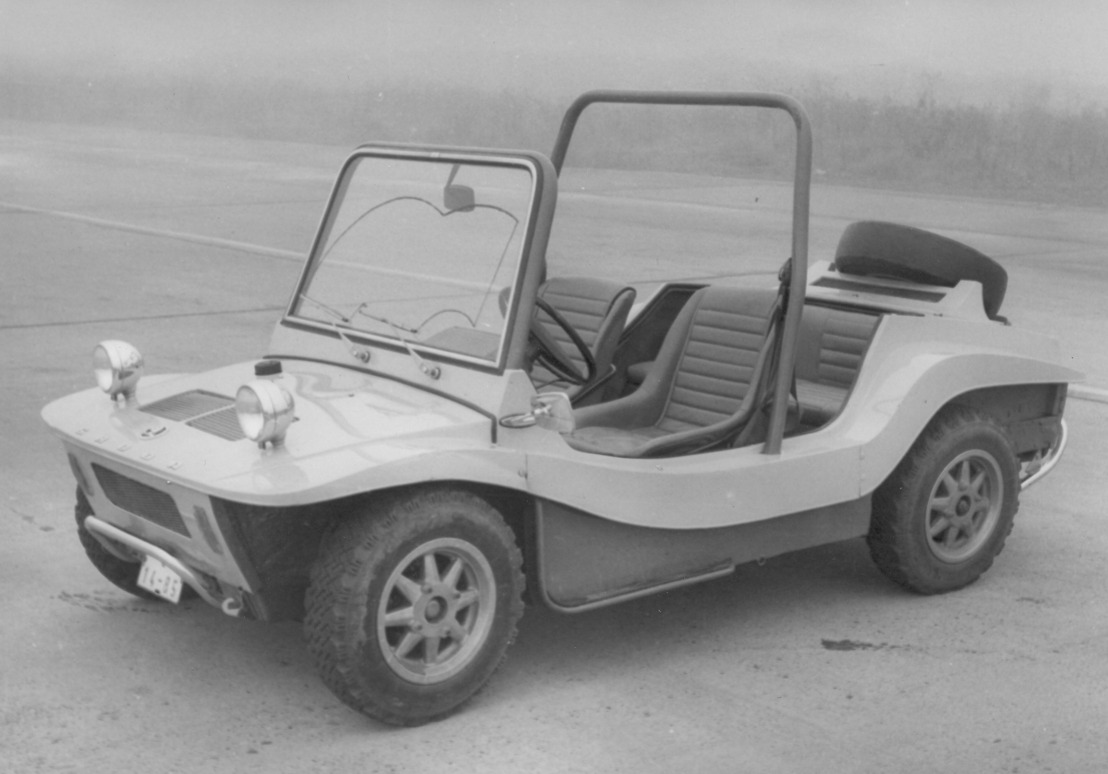 Mladá Boleslav, 24 April 2020 – Throughout its 125-year history, ŠKODA AUTO has presented concept cars that are as unusual as they are exciting. One such vehicle was the BUGGY Type 736: It was based on the standard notchback model 110 and continued the tradition of building autocross racing cars, with which the Czech car manufacturer had celebrated championship successes in the early 1970s. The 1100 series engine of the doorless convertible, which was particularly impressive off-road, had an output of 33 kW (45 hp). The last of a total of five prototypes was built in 1975 and today belongs to the ŠKODA Museum in Mladá Boleslav.

At the end of the 1960s, ‘Autocross’ made its way on to the European motorsport scene. In entertaining and exciting races, drivers competed against each other on unpaved circuits, fighting for victory in minimalist, lightweight vehicles. In Czechoslovakia, the first official autocross event took place in autumn 1969 in the town of Přerov and a little later ŠKODA also took part in the new motorsport discipline: In November 1970, works driver Milan Žid won the <1,000 cc class at the Steeplechase horse race track in Pardubice. To optimise the weight of his ŠKODA 1100 MB, the bumpers and rear doors were left off when the car was being constructed, and the interior was stripped back to the bare essentials.

ŠKODA dominated the first Czech autocross championship in 1971 with a buggy based on the ŠKODA 100/110 L. However, the floor assembly of the racing car was 40 centimetres shorter, and the bodywork had largely been replaced by roll bars. Milan Žid remained unbeaten again in the one-litre class, and Oldřich Brunclík, another factory driver, dominated the next category up – the engine of his buggy was increased to 1,150cc. Despite these successes, the ŠKODA factory team ended its involvement in autocross in the following 1972 season, as the sports department was running at full capacity preparing racing and rally cars.

As the enthusiasm for autocross continued to grow, a trend was spreading from the beaches of California and Florida to Europe: purist dune buggies or beach buggies. These technologically simple vehicles were great fun and offered a thrilling driving experience, which in turn generated interest in purely recreational vehicles. These cars, which were often sold in kit form, were usually technically modified small cars with lightweight bodies made of glass fibre reinforced plastic (GRP). In Western Europe, several manufacturers made use of ŠKODA’s modern and very competitively priced technology, especially in the one-litre class.

Francois Vernimmen from Namur in Belgium was one of the most active European buggy manufacturers at that time. In 1971 he used the reinforced floor platform of the ŠKODA 100 and built two copies of his Buggy VF on it. He shortened the wheelbase from 2,400 to 2,240 mm, the open body of the buggy had a tarpaulin roof, and the interior contained little more than a sports steering wheel and bucket seats. The four-cylinder 988 cc engine in the rear had an output of 31 kW (42 hp) and was derived from the notchback series model as was the four-speed transmission. In January 1972 the vehicle celebrated its world premiere at the ŠKODA stand at the Brussels Motor Show. Within three years, around 30 copies of the car had been built. From 1973 it was known as the “VF Okap” and its engine had a displacement of 1,107cc.

Motorest, at that time the Italian ŠKODA general importer, also sold similar special products. The ‘Kirby’, a development by the small-car manufacturer Autozodiaco from Pianoro near Bologna, debuted at the Turin Motor Show in November 1972. This open-top two-seater was also based on the ŠKODA 100 but with an unmodified wheelbase. For safety reasons the ‘Kirby’, like the VF, had a tubular frame supporting the windscreen and a rear roll bar. In total, however, only two copies were built; the 1,107cc engine with one or two carburettors was never used in the ‘Kirby’.

In Mladá Boleslav, ŠKODA was paying close attention to the construction of these vehicles and eventually decided to launch Project 736 in 1973: The ŠKODA BUGGY was created to find out whether a similar vehicle had export potential and made economic sense. Two years of intensive work followed before the test drives were finally completed in the summer of 1976. The 110 L served as the basis for the prototype. The designers had shortened the wheelbase to 2,000 millimetres, while two longitudinal struts, a tubular frame around the windscreen and a higher roll bar above the heads of the driver and front passenger ensured that the floor platform was more rigid. Josef Čech was responsible for designing the open metal bodywork, which as a 2+2 seater could carry four people. The first model was created with the help of the development department, which also took care of painting the car. By October 1975, the car manufacturer’s apprentices at the company’s vocational school had completed the other four units by hand. This makes the ŠKODA buggy an early forerunner of the now six ‘Apprentice cars’ that the students of the ŠKODA vocational school have built in recent years.

The buggies built by ŠKODA differed from those from Belgium and Italy mainly due to their more sophisticated construction. For example, the radiator, battery and 40-litre fuel tank were located at the front of the vehicle, which contributed significantly to a more favourable weight distribution and balanced axle loads. Massive tubular frames protected the front and rear sections. The two headlights on the front body cover were particularly eye-catching, as was the spare wheel on the rear bonnet that was protected by a cover. The 1,107cc 33 kW (45 hp) powerful four-cylinder engine from the ŠKODA 110 provided the propulsion, and thanks to a torque of 74 Newton metres at 3,000 revolutions it had little trouble powering the light vehicles: the 3.32-metre short BUGGY weighed in at only 710 kilograms, but could carry a load of 400 kilograms. That was enough for four adults and 100 kilograms of luggage, for which there was no storage space when four people were on board. If two people were travelling together, the back seat could be used as a 980-millimetrewide storage area. The occupants were protected from the elements by a textile soft top and side panels with transparent film. The prototype reached a top speed of 107 km/h with half of the load on road tyres from Barum in size 165 SR 13 – the off-road tread was size 175 SR 13 – and the average consumption was 8.3 litres per 100 kilometres.

The ŠKODA BUGGY Type 736 covered almost 30,000 kilometres in test drives and received almost exclusively positive evaluations. However, this was still not enough to start series production of the niche model, even though the developers had presented possibilities to simplify production and thus reduce costs. The ideas ranged from using a GRP body to considerations about offering the BUGGY to the police or border patrol, which ultimately fell through due to the legislation at the time. After the project had ended, however, one of the prototypes went into service at Prague Airport, where it was used as a ‘follow me’ vehicle.

One of the five copies now belongs to the ŠKODA Museum in Mladá Boleslav after being carefully renovated in 2017. The restoration of the vehicle was carried out by the former students of the company’s vocational school in Mladá Boleslav who had been responsible for constructing this unique car in the 1970s.

125 years of ŠKODA AUTO: the story’s behind the brand’s lesser-known models

This series comprises a total of seven press releases.

The following have already been published:

The following article is being prepared: