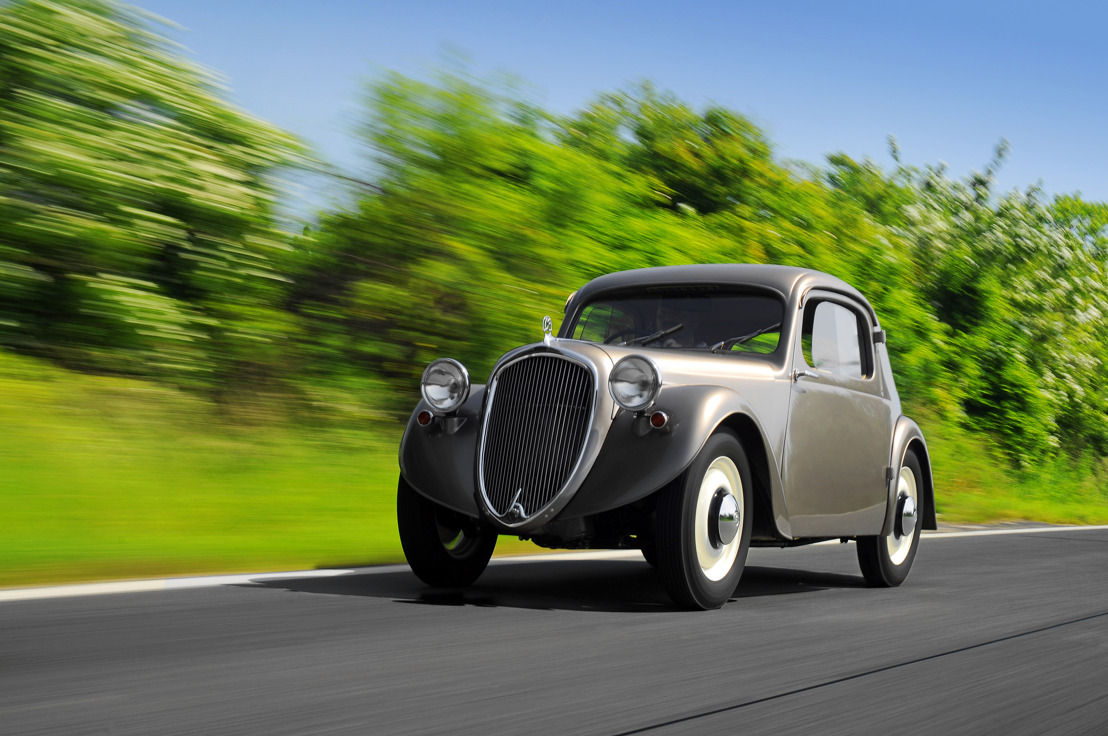 Mladá Boleslav, 9 April 2020 – ŠKODA’s best-selling car between the two world wars was the POPULAR. However, the Mladá Boleslav brand’s bestseller, presented in 1934, continued to grow in terms of displacement and engine power, dimensions and price over the following years. The mid-class model thus opened up space in the model range for a more affordable alternative: the 995 POPULAR ‘Liduška’ with a water-cooled four-cylinder engine. Development began in 1936 with unique prototypes that the Bohemian manufacturer used to experiment with unusual drive systems. Two of these so-called ŠKODA SAGITTAs survive to this day.

In the 1920s, cars were the preserve of the wealthy in many countries, and Czechoslovakia was no exception. On the one hand, this was due to the very low production figures and on the other hand to high taxation, which further dampened demand. When the world economic crisis came in the autumn of 1929 and the spirit of optimism of the “Golden 20s” faded, the situation became even more strained. ŠKODA was comparatively well prepared for this turning point: The company, founded in 1895 – 125 years ago – by Václav Laurin and Václav Klement, had opened a plant with modern assembly line production months earlier in Mladá Boleslav and was able to manufacture at correspondingly low prices. ŠKODA also took an important step towards making cars affordable to a larger segment of the population when it abandoned vehicles based on a ladder frame. The development of the new generation of models with a significantly lighter central tubular frame and advanced independent suspension, which offered greater driving comfort with less maintenance, began in the summer of 1932 in the Prague district of Letňany under the leadership of Josef Zubatý.

The various engine concepts that engineer Zubatý tried out at the time show just how consistently ŠKODA was challenging the tried and tested and thinking outside the box to develop new vehicles – even though the Czech car manufacturer had gained a great deal of experience with water-cooled in-line four-cylinder four-stroke engines since 1906. Nevertheless, in January 1933 an air-cooled V2 four-stroke engine with 750 to 800cc displacement, which had an output of around 12 kW (16 hp), was developed as an alternative. In June a prototype made its debut with the ŠKODA 112. Its rear wheels were driven by a 500cc two-stroke single-cylinder rear engine. But that was not all: In autumn another air-cooled V2 four-stroke with 850cc displacement was created, and in September a V2 two-stroke followed. But not even this Type 222 could win over the company management. In October 1933 they gave the go-ahead for further tests on another four-stroke concept. This finally led to the prototype 215 with an 804cc 11 kW (15 hp) in-line two-cylinder engine.

However, for the new production model, the 420 STANDARD introduced in 1933, the quiet, economical and reliable four-stroke four-cylinder engine once again prevailed. Like the 418 POPULAR, which was presented in February 1934, it had a displacement of 902cc. From April 1934, the ŠKODA 420 POPULAR with a 995cc 16 kW (22 hp) four-cylinder engine was added to the range. Although the production of these engines cost around 650 crowns more, ŠKODA was able to offer the new vehicle concept at a price rivalling its competitors' two-cylinder models. Even though significantly higher quality materials were used, the price of the 418 POPULAR fell from 29,800 to 18,800 crowns compared to the previous corresponding model – the four-seater ŠKODA 420 STANDARD – thanks to efficient assembly line production.

Nevertheless, the POPULAR, with a sizeable exterior length of up to four metres, was becoming ever larger and even the basic versions were still too expensive to appeal to a broad customer base. At ŠKODA, plans for a smaller, more economical vehicle began to take shape that would soon trigger a boom in car ownership. These came in the form of the so-called SAGITTA prototypes, whose Latin name means “arrow” in reference to the brand logo. The exact date of their development cannot be precisely traced in the ŠKODA AUTO archive today, but other records date the project to between 1936 and 1938. The dimensions of the small car are clear: with a wheelbase of 2,100 millimetres, the test vehicles were 3,400 mm long, 1,320 mm wide and 1,420 mm high.

The first test vehicle was mounted on wheels in April 1936. With a central tubular frame and four individually suspended wheels with transverse, semi-elliptical leaf springs, it was based on ŠKODA’s now well-established concept. We no longer know what body this prototype had. In any case, it was followed by two convertibles, a two-door car with four full-size seats instead of a 2+2 arrangement, and four coupés, which differed from one another, among other things, in whether the side windows opened horizontally or vertically. Similar to the POPULAR, their three-speed transmissions with the transfer case on the rear axle formed an advanced ‘transaxle’ unit – only later did this clever layout become widely accepted, for example for expensive sports and racing cars. In the ŠKODA POPULAR and SAGITTA it offered the driver and passenger more legroom and lowered the vehicle's centre of gravity.

The fact that this transaxle principle also improved traction on the mostly unpaved, muddy or sandy roads at the time was a welcome bonus – although the SAGITTA did not need a differential gear, with its narrow track width of only 1,050 mm, the 16-inch wheels were much less prone to slipping even on snow. The precise rack-and-pinion steering also contributed to the ease of control. When empty, the SAGITTA weighed just 580 kilograms; when fully loaded, it could weigh up to 860 kilograms.

Under the bonnet, which along with the radiator grille, the V2-cylinder four-stroke engines from the test program of engineer Zubatý performed their task – now with SV valve control, 844cc displacement and an output of 11 kW (15 hp), which was achieved at 3,000 revolutions per minute. In contrast to ŠKODA’s usual design, they were air-cooled instead of water-cooled and had a fourblade fan made of lightweight metal and a capillary thermometer behind each of the ribbed cylinder heads. Their displays, easily recognizable to the test drivers, were mounted on the dashboard, which resembled the POPULAR’s. Instead of the initial Zenith 26 VEH carburettors, the more modern Solex BFRH were installed. They featured an air filter consisting of an oil-soaked wire mesh. Preheating the intake manifold using exhaust gases made it easier to start the engine. The electrical on-board network was based on a 6-volt system from the Swiss specialist Scintilla. The prototype reached a top speed of 70 km/h; fuel consumption averaged 5.5 litres per 100 kilometres.

Two specimens of the rare SAGITTA are now in the ŠKODA Museum’s collection in Mladá Boleslav. The fully restored coupé, painted in metallic brown, is an integral part of the permanent exhibition. It has sliding windows in the side doors – a well-thought-out solution that does not require window cranks, thus improving the sense of space at elbow height. Another coupé model is waiting to be restored in the museum warehouse. Although these attractive small cars did not go into series production, they served their purpose nonetheless: many elements including the engine mounted longitudinally in front of the front axle and the radiator grille, which lifted up together with the bonnet to make work on the water-cooled four-cylinder easier, found their way into the 995 POPULAR ‘Liduška’ built from November 1938. Despite its more elaborate 995cc, 16 kW (22 hp) engine and 400-millimetre longer body, it became a big hit in terms of price and sales: ŠKODA only charged 17,300 crowns excluding VAT. By 1946, a total of 1,478 units of the ‘Liduška’ had rolled off the production line.

Lesser-known models from ŠKODA AUTO’s 125-year history This series comprises a total of seven press releases. The following have already been published:

The following articles are being prepared: