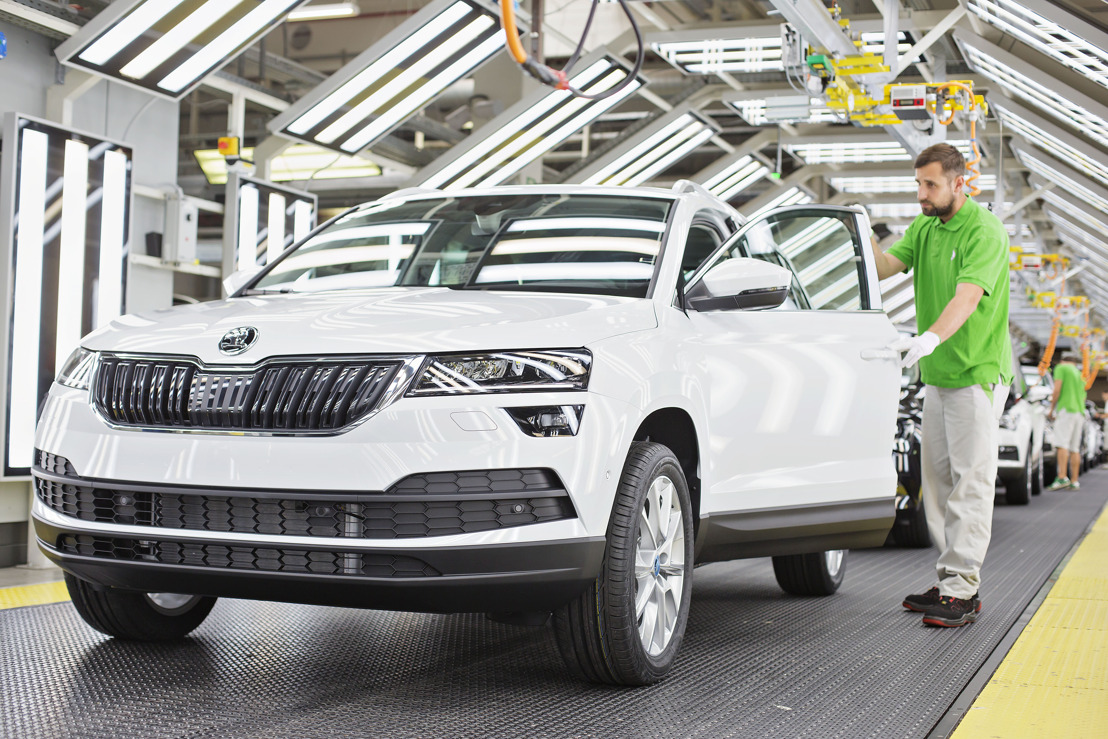 On course for a record once again: Together with its production partners worldwide ŠKODA AUTO has already produced one million vehicles this year, making it the fourth year in a row that the number of vehicles rolling off the production line has reached seven figures. Never before has this milestone been achieved as early as in October of a calendar year. The ŠKODA models OCTAVIA, FABIA and SUPERB have made the greatest contribution to this success. Additionally, the large SUV, the ŠKODA KODIAQ, promises further growth for 2017. The ŠKODA KAROQ will also provide impetus for growth. The company is currently introducing the compact SUV to the markets, thereby continuing its SUV campaign.

"Reaching the mark of one million cars produced is an important milestone for us this year," said ŠKODA AUTO Board Member for Production and Logistics, Michael Oeljeklaus. "This number, which has now already been reached, underlines the performance of our production sites as well as the expertise of our team. This year, we are once again aiming for a new production record," added Oeljeklaus.

ŠKODA AUTO has reached together with its production partners worldwide the mark of one million ŠKODA vehicles produced in a financial year for the fourth consecutive time. The long-established company from Mladá Boleslav has reached this milestone earlier than ever before. In addition to the high demand for its bestseller, the ŠKODA OCTAVIA, FABIA and the SUPERB model ranges, the successful debut of the ŠKODA KODIAQ also made a contribution to increasing the production volume. Furthermore, the market launch of the large SUV in February this year marked the start of ŠKODA AUTO’s SUV campaign as part of the 2025 Strategy. As the most recent addition to the ŠKODA family, the ŠKODA KAROQ compact SUV is currently being introduced to the markets.

The landmark of one million vehicles produced, which was reached at the end of October, underlines once more ŠKODA AUTO’s positive development over the last 25 years in particular. Since joining Volkswagen Group in 1991, the Czech car manufacturer has increased its production sevenfold and transformed itself from a regional operator into an established high-volume manufacturer. Whilst there was only one model range rolling off the production line back then, today it is seven model ranges and over 40 model variants.

As it has grown, the company has been cultivating an international and efficient production network. In its home country of the Czech Republic, besides its main plant in Mladá Boleslav, the manufacturer operates further production plants in Kvasiny and Vrchlabí. In addition, ŠKODA

vehicles also roll off the line at Volkswagen Group plants or with local partners in China, India, Russia, Kazakhstan, Ukraine, Algeria and Slovakia.

ŠKODA AUTO has set a course for long-term growth beyond 2017. The roadmap for this comes in the shape of the 2025 Strategy, with which the Czech manufacturer is preparing itself for the upcoming challenges in the automotive industry. The future strategy’s key topics include electromobility, the digitalisation of the company, internationalisation and new mobility services. With this, ŠKODA AUTO aims to grow in two dimensions: on the one hand, vehicle sales are to be increased further and on the other hand, new business areas, such as digital mobility services, are to create a broader base for growth.