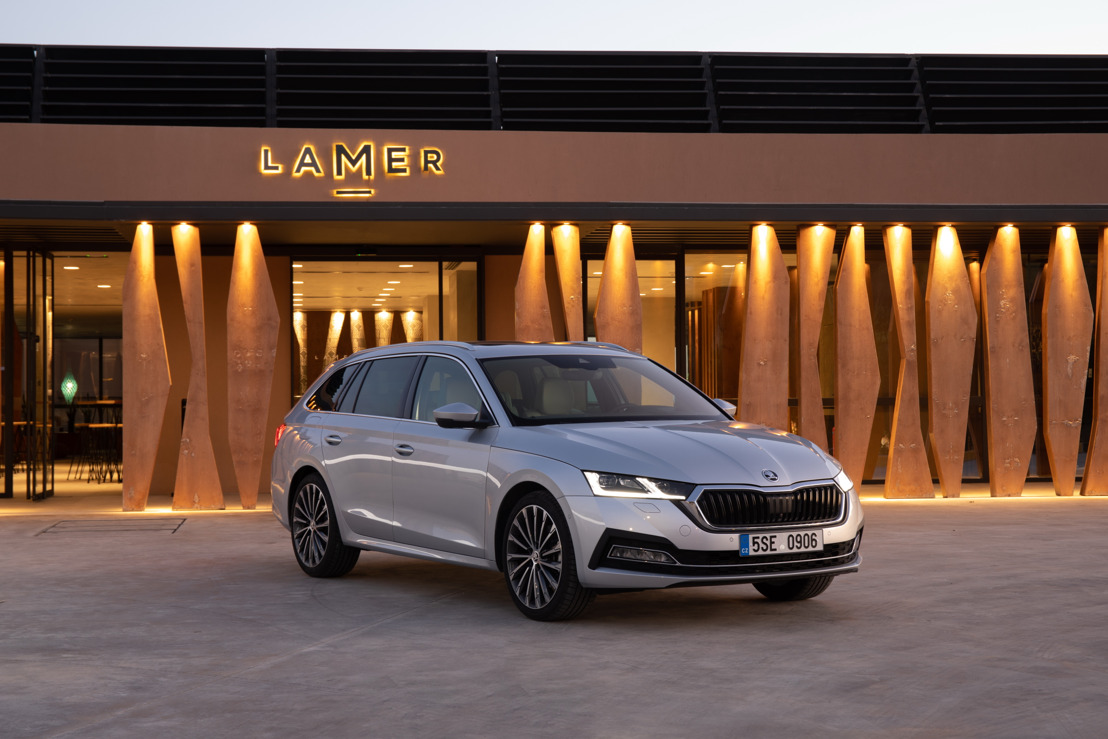 Mladá Boleslav, 16 March 2020 – Even better, more spacious, safer, more connected and more emotive than ever: with the launch of the fourth generation of its bestseller, ŠKODA has reached new dimensions. The new OCTAVIA is longer and wider than its predecessor, has an even larger boot and is even more emotive thanks to the new ŠKODA design language. The new interior concept combines an excellent amount of space and outstanding functionality with high-quality materials and clever details. Innovative connectivity and new assistance systems raise the comfort and safety of the brand’s icon to an even higher level.

ŠKODA AUTO CEO, Bernhard Maier, said, “For ŠKODA, the OCTAVIA is of immense importance. That’s why we’ve completely redeveloped this car. The outcome is the best OCTAVIA of all time – it is even more spacious, even more practical and even safer than ever before. By unveiling its latest generation just in time for the model’s 60th anniversary, we have taken a major step forward. The OCTAVIA has significantly contributed to the positive development of the company and brand over the last six decades. I am very confident that the new generation will play its part in maintaining this positive development.”

The fourth generation since the modern-day OCTAVIA’s launch in 1996 will further cement the model line as the brand’s heart and engine, as well as its top volume model. With more than seven million units produced, it is the bestselling ŠKODA ever and has been a real icon for many years, both in its Czech homeland as well as in numerous other markets around the world. The reasons for this are obvious: it features modern design and technology, is efficient, extremely practical and high-quality. Added to this, it also offers exceptional amounts of space and superior value for money.

Bigger and even more attractive

The new OCTAVIA has grown further and, thanks to new proportions and the latest developments in ŠKODA's design language, is even more emotive and dynamic than its successful predecessor. At a length of 4,689 mm, the hatchback is 19 mm and the COMBI 22 mm longer than the third-generation model. Its width has increased by 15 mm. The COMBI’s boot capacity, which is the largest in the segment, has increased by 30 l to 640 l. The hatchback has a capacity of 600 l – 10 l more than the previous generation. The new front apron and the razor-sharp, narrower, new headlights are a visual delight and feature LED technology for low beam, high beam and daytime running lights as standard. The tail lights, brake lights and fog lights make use of LED technology as well. The newly designed, shallow roof rails emphasise the elongated silhouette of the OCTAVIA COMBI, while the hatchback looks almost like a coupé. Alloy wheels measuring up to 19 inches lend all of the model variants a powerful appearance. Crystal Black, Lava Blue and Titan Blue have been newly added to the range of paint finishes; a Dynamic package is an optional extra and chrome window frames as well as Elox roof rails are also available.

In the newly designed interior, the OCTAVIA offers a new two-spoke steering wheel, which can be heated as an option. If ordered as a multifunction variant, it comes with new control buttons and knurled scroll wheels, allowing drivers to operate a total of 14 different functions without removing their hands. The dashboard, which has also been redesigned, is modular and has been arranged in different levels, featuring a large, free-standing central display. The centre console is elegant, uncluttered and adorned with chrome details – as are the new door trims and handles. New and soft-touch materials lend the interior a premium look. The new LED ambient lighting indirectly illuminates the front doors, dashboard and footwells. The driver can choose up to 30 RGB colours and can even assign a different colour to the dashboard and front doors than to the footwell. In addition, they can select from coordinated lighting scenarios.

Optional, particularly back-friendly Ergo seats, which among other things offer an electric massage function, are celebrating their ŠKODA premiere. In the top version, they can also be ventilated and bear the seal of approval from the German Campaign for Healthier Backs. The optional head-up display is another first for a ŠKODA. It projects the most important information such as speed, navigation, detected traffic signs and activated driver assistance systems directly onto the – if desired, heated – windscreen. Tri-zone Climatronic is making its debut in the OCTAVIA. Using the optional keyless vehicle entry system (KESSY), now any one of the car’s four doors can be opened first. The standard equipment also includes electric side windows and an electromechanical parking brake. The ŠKODA OCTAVIA is now also available with acoustic side windows at the front, which reduce road noise in the cabin even further.

The new OCTAVIA is the first ŠKODA ever to use shift-by-wire technology to operate the DSG, which electronically transmits the driver’s gear selection to the transmission. In place of the familiar DSG lever, there is therefore a new control module located in the centre console with a small rocker switch for selecting the drive modes as well as a button for the parking mode. Innovative full LED Matrix headlights are available as an option, allowing the driver to leave the high beam on at all times without dazzling other road users. Full LED tail lights featuring crystalline elements, dynamic indicators and the animated Coming/Leaving Home function are another option.

A whole range of new safety systems such as Collision Avoidance Assist, Turn Assist, Exit Warning and the Local Traffic Warning function are also making their debut at ŠKODA. Other new features for the OCTAVIA include Area View, Side Assist and Predictive Cruise Control, which – together with the updated version of Traffic Sign Recognition as well as Adaptive Lane Assist, Traffic Jam Assist and Emergency Assist – forms the comprehensive Travel Assist system. Using Hands-on Detect, this system also checks whether the driver is touching the steering wheel consistently. Up to nine airbags, including a driver knee airbag and rear side airbags, protect occupants in the event of a collision.

Never before has the OCTAVIA been as efficient, eco-friendly and available with as many alternative powertrains as in its fourth generation. For the first time, the line-up includes a plug‑in hybrid, the OCTAVIA iV, as well as the OCTAVIA RS iV (see page 18). In the OCTAVIA iV, a 1.4 TSI petrol engine and an electric motor deliver a combined power output of 150 kW (204 PS). With a capacity of 37 Ah providing 13 kWh of energy, the high-voltage lithium-ion battery allows for an electric range of up to 60 km in the WLTP cycle*. Some of the petrol engines, which have been further optimised, are now equipped with innovative mild hybrid technology, while the diesel engines come from the latest EVO generation and emit up to 80 per cent less nitrogen oxide. The plethora of powertrains deliver outputs ranging from 81 kW (110 PS) to 150 kW (204 PS). With 17.7 kg of natural gas (CNG) in its tanks, the OCTAVIA G-TEC can cover up to 523 km in its eco-friendly and efficient CNG mode.

The e-TEC variants fitted with either of the latest EVO-generation 1.0 TSI or 1.5 TSI petrol engines feature mild hybrid technology when equipped with DSG. Using a 48-volt belt-driven starter motor and a 48-volt lithium-ion battery, it is possible to recover brake energy, support the combustion engine by providing it with an electric boost, and to coast with the engine completely switched off.

The 2.0 TDI EVO diesel engines apply a new ‘twin dosing’ exhaust gas treatment, where AdBlue® is injected specifically in front of the two catalytic converters, which are arranged one after the other. Dynamic Chassis Control including Driving Mode Select, which is optional, now comes with slider controls within the different driving modes, allowing the driver to change individual parameters such as the suspension, damping and steering characteristics or the operation of the DSG to suit their preferences.

The OCTAVIA offers a choice of four infotainment systems from the latest generation with screens measuring from 8.25 to 10 inches. Some of them can be operated using gesture control or by voice via the Laura ŠKODA Digital Assistant. The top-of-the-range Columbus infotainment system can – for the first time – display the navigation system’s maps in a different level of zoom than the 10.25-inch Virtual Cockpit (which, by the way, has also been further improved, making it even more user-friendly). This new function can be adjusted via an innovative touch slider located below the display, which can also be used to control the volume.

The OCTAVIA is always online thanks to a built-in eSIM, enabling access to the latest ŠKODA Connect mobile online services at all times. These include eCall, which is mandatory in the EU, comprehensive remote vehicle access and infotainment apps backed by online data. The car features up to five USB-C ports: two in the front centre console for charging or connecting media devices and USB sticks, and a further three, one of which can optionally be housed in the overhead console above the rear-view mirror for charging only. Furthermore, smartphones can be charged inductively using the optional Phone Box. Finally, the acoustically optimised interior and the new optional CANTON Sound System ensure a perfect audio experience.

For diesel cars, the range of the brand-typical Simply Clever features now also includes a convenient filler tube for AdBlue®, enabling it to be filled up using a lorry pump nozzle too. In the rear, two smartphone storage pockets on the front seatbacks are making their debut at ŠKODA. The Sleep package for the back seat is now also an optional extra for the OCTAVIA COMBI. In addition, new retractable sun blinds for the rear side windows make it possible to block out the light. There is a multifunction storage pocket below the boot cover in both the hatchback and the OCTAVIA COMBI; the latter will feature an automatically retractable load cover too. The storage compartment in the front doors can now also feature a snow brush instead of the familiar umbrella. The funnel integrated into the lid of the windscreen washer tank is yet another new feature in the OCTAVIA.

*This information is provisional and subject to change.