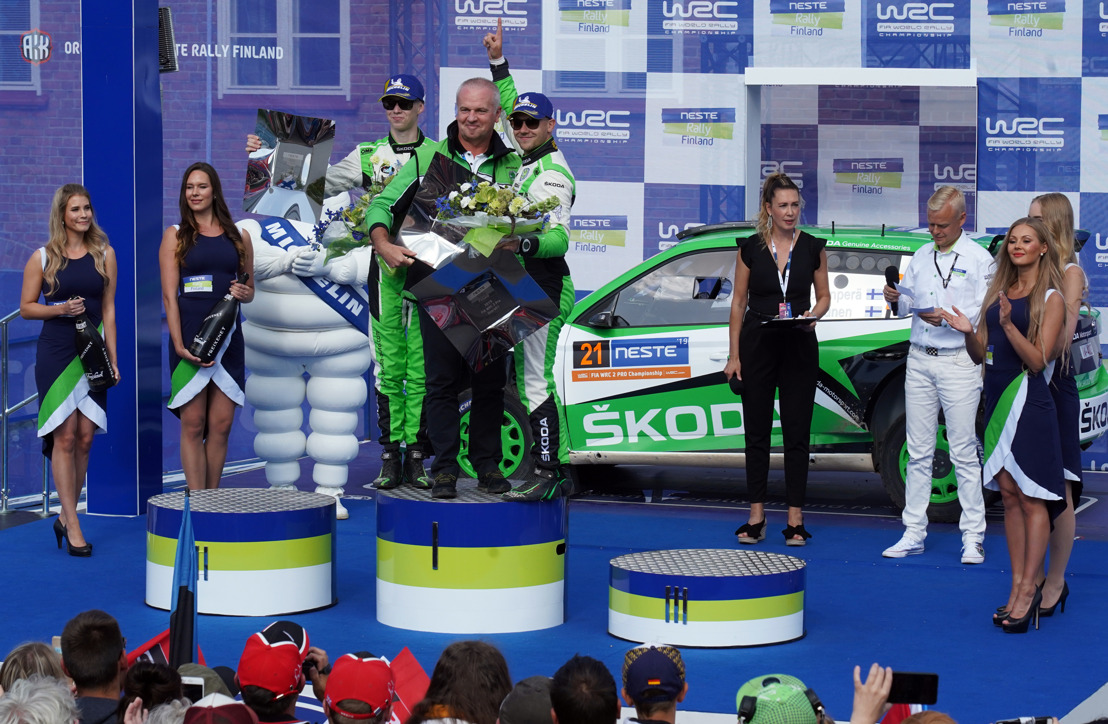 Jyväskylä, 4 August 2019 – At Neste Rally Finland, the ŠKODA FABIA R5 evo crew of Kalle Rovanperä and co-driver Jonne Halttunen (FIN/FIN) led the WRC 2 Pro competition from start to finish and scored their fourth victory in a row on a round of the 2019 FIA World Rally Championship. The new ŠKODA FABIA R5 evo not only remains undefeated since its homologation in April this year. Also, ŠKODA Motorsport conquered the outright lead in the manufacturers standings of the championship’s WRC 2 Pro category. On top of that, Russian crew Nicolay Gryazin/Yaroslav Fedorov won the WRC 2 category for private teams with the predecessor model ŠKODA FABIA R5, proving that both generations of the FABIA are the fastest cars of the R5 class.

On the final day of Neste Rally Finland, ninth round of the FIA World Rally Championship 2019, four final stages were waiting for the crews. The famous "Ruuhimäki" test with its enormous jumps alone attracted so many spectators, that the assigned parking areas were flooded by cars and mobile homes already the night before. In front of a massive home crowd, Kalle Rovanperä and co-driver Jonne Halttunen were cool like this time the weather in middle Finland was. During the last leg of the four day event, they continued their fast and concentrated drive with their ŠKODA FABIA R5 evo. There never was a doubt, that the Finnish crew would secure victory on their home game.

"It is incredible! After some setup modifications on Friday the car worked very well and I had proper fun! I was going flat out on the fast passages and took some caution over the rough parts. We would have liked to be even quicker, but we didn’t want to risk anything. Driving the ŠKODA FABIA R5 evo in Finland – that is rallying at its finest," celebrated an enthusiastic Kalle Rovanperä together with co-driver Jonne Halttunen on the podium in his home town Jyväskylä. ŠKODA Motorsport boss Michal Hrabánek praised the Finns: "Kalle and Jonne impressed me with their nerves strength. They met the high expectations exceptionally well and mastered the challenge in front of their fans in the best possible way. From our rich experience we know, how extremely demanding it is for Finnish crews, to shine at their home event."

In the back of Rovanperä/Halttunen, the WRC 2 category for private crews saw a strong performance by French ŠKODA pairing Pierre-Louis Loubet and co-driver Vincent Landais. Rallying the new ŠKODA FABIA R5 evo for the first time, they initially were in control of their class. But they left the road during the last stage of Saturday and lost valuable time. As a consequence, Russian ŠKODA privateers Nicolay Gryazin/Yaroslav Fedorov took a well deserved victory with the predecessor model ŠKODA FABIA R5.

Number of the day: 4

With its WRC 2 Pro victory at Neste Rally Finland, ŠKODA works crew Kalle Rovanperä/Jonne Halttunen for the fourth time in a row won the category during the 2019 FIA World Rally Championship.