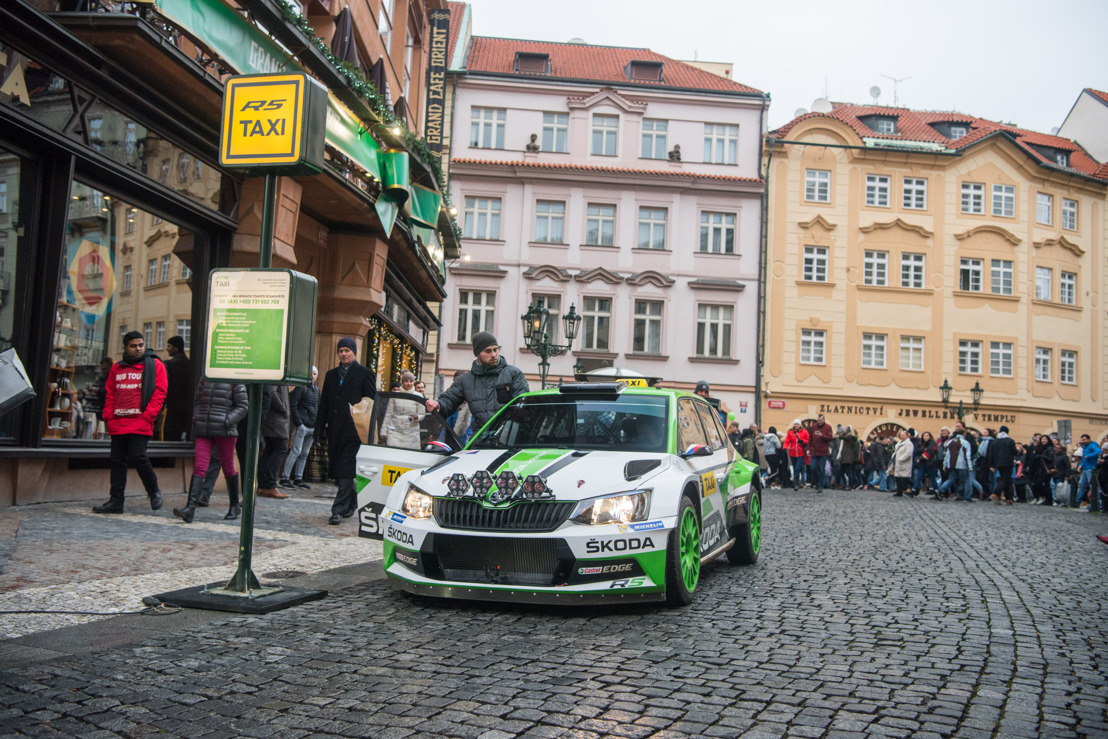 Mladá Boleslav/Prague, 23 December 2017 – ŠKODA Motorsport celebrated the most successful year in its history in spectacular style. With Christmas getting closer, ŠKODA factory driver Jan Kopecký gave a number of people in Prague a special surprise: The five times Czech Rally Champion answered to calls for a taxi, showing up with a 290 bhp ŠKODA FABIA R5 rally car. What followed was an unforgettable drive through the streets of the Czech capital – unforgettable for Kopecký and his guests alike.

"Driving a ŠKODA FABIA R5 through the city of Prague really was an unique experience. Luckily nobody got stomach problems. Nevertheless I was well prepared having sickness bags in ŠKODA colours on board," laughed ŠKODA factory driver Jan Kopecký.

Driving a ŠKODA FABIA R5 the five times Czech Rally Champion normally thrills spectators along special stages around the world. This time, with Christmas getting closer by the day, he made a number of people a very exclusive present: Randomly picked "taxi customers" got the chance to co-drive Kopecký on the streets of Prague’s city centre on board the turbo-powered, all-wheel driven rally car. The ŠKODA FABIA R5 was seen all over the Czech capital during the day, starting at Prague’s fruit market. Later on "cabby" Kopecký changed to Dlouhá Street, where he turned some more heads during the early evening hours.

Strapped down in the hot seat, normally the "office" of Kopecký’s co-driver Pavel Dresler, the passengers had to fulfill difficult tasks during the rides. For example they had to read the pace notes, the meticulous stage description used during a rally, or to figure out how the co-driver can activate the ŠKODA FABIA R5’s wipers. So they could experience firsthand the demanding job of a co-driver on board a rally car.

A video of the high-adrenaline taxi drives can be found on the Internet, on YouTube, Instagram and Facebook as well as on the web sites of ŠKODA Motorsport and on ŠKODA Storyboard. ŠKODA Storyboard additionally features an interview with Kopecký about his debut as taxi driver.