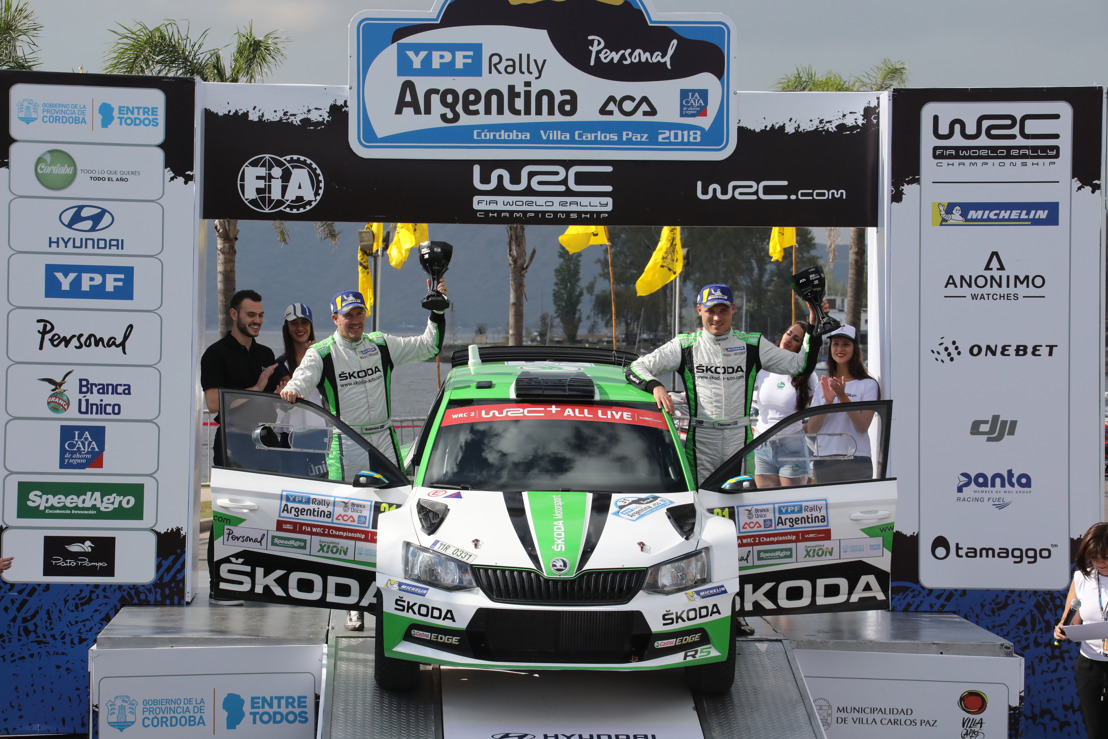 Villa Carlos Paz, 29 April 2018 – Reigning WRC 2 Champions Pontus Tidemand/Jonas Andersson (SWE/SWE) repeated their last year’s victory at Rally Argentina, fifth round of the 2018 FIA World Rally Championship (WRC). The Swedish pairing takes the lead in the WRC 2 championship standings from ŠKODA teammate Jan Kopecký, who did not compete in Argentina. ŠKODA factory crews Tidemand/Andersson and Rovanperä/Halttunen (FIN/FIN) where leading the WRC 2 category going into the event’s last day. But in the penultimate stage, Rovanperä went off the road close to the finish. Thanks to the safety package of the ŠKODA FABIA R5, the crew was unhurt, but had to retire. Norwegians Ole Christian Veiby and Stig Rune Skjaermoen, another duo of ŠKODA juniors, thanks to a great performance finished second in RC 2 class, which includes the WRC 2 category.

On the final day of Rally Argentina three more stages, covering 55.27 kilometres, had to be driven.

Pontus Tidemand and co-driver Jonas Andersson tried everything to catch their young Finnish teammates. With a tremendous effort on the opening "El Condor" stage, they were 13.3 seconds quicker than Rovanperä/Halttunen, reducing the gap to only 9.9 seconds. On the penultimate stage, the Finnish youngsters went off the road close to the end of the stage. Thanks to the safety package of their ŠKODA FABIA R5, they escaped without injury, however.

With the WRC 2 lead back in his hands, Pontus Tidemand drove cautiously in the last stage and won the category with the huge margin. The Swedish crew moved as well into the lead of the WRC 2 championship standings. "Sorry for Kalle. We had a tense fight and I always followed our Team instructions. I believed in my speed myself and obviously did not want to win this way," Tidemand said.

After two punctures on the Saturday stages ŠKODA junior O.C. Veiby managed to regain the third position in RC 2 class after a fast time on the opening Sunday stage. In the end, the Norwegian finished in second place.

ŠKODA Motorsport boss Michal Hrabánek commented: "Accidents are a part of the game. Luckily, the safety standards of modern rally cars like our ŠKODA FABIA R5 are extremely high. So Kalle and Jonne escaped from that accident without being injured. Nevertheless, I want to thank both crews for the tremendous performance they delivered, the whole ŠKODA Motorsport Team did an excellent job."

All of the 18 stages of Rally Argentina were won by teams competing in a ŠKODA FABIA R5.