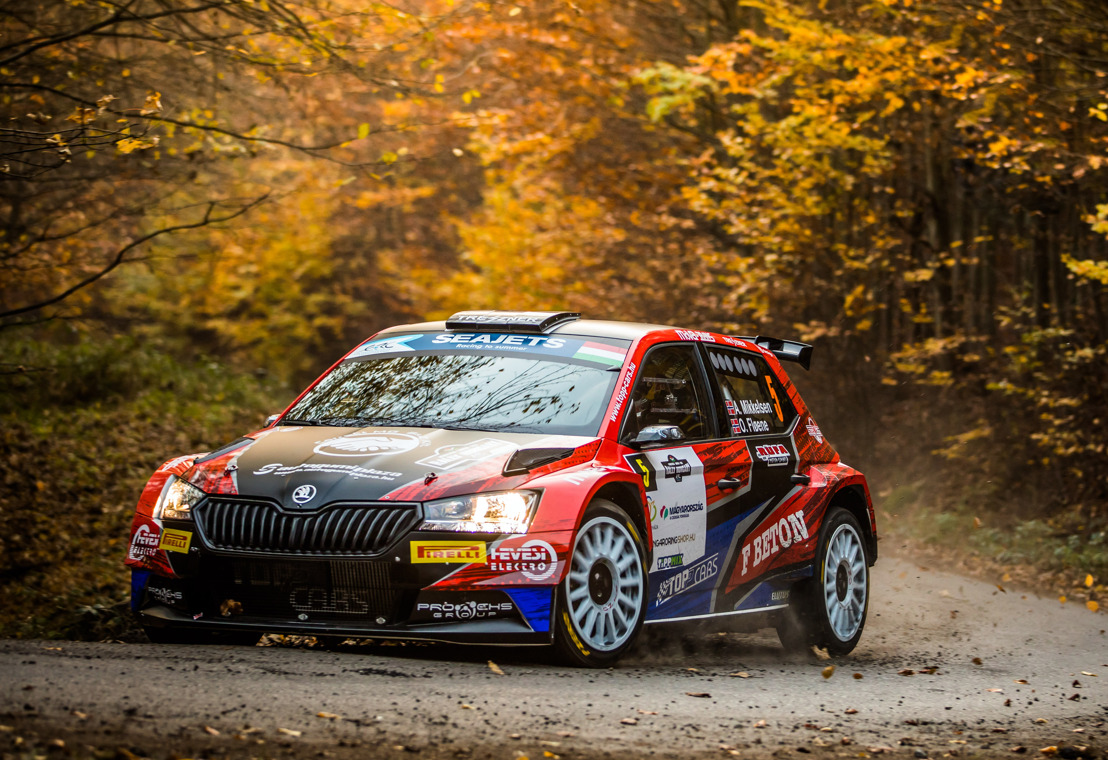 Back in 2017, Andreas Mikkelsen competed for ŠKODA Motorsport in the WRC2 category of the FIA World Rally Championship. He won the category at Rally Monte Carlo and Rally France, during both finishing a remarkable seventh in the overall classification among the more powerful WRC1 cars. With a ŠKODA FABIA S2000 he also won the Intercontinental Rally Championship (IRC) in 2011 and 2012. For Rally Hungary, fourth round of the FIA European Rally Championship 2020, he returned to the Czech brand, together with his co-driver Ola Fløene.

After some testing mileage, Mikkelsen felt immediately at home behind the steering wheel of the ŠKODA FABIA Rally2 evo, prepared by the Hungarian Topp Cars Rally Team. “I feel comfortable with the ŠKODA and I am here to win”, said Mikkelsen before the start. He proved himself right by claiming the lead after the second stage of the rally, eventually winning five of the nine special stages of the Saturday leg. During the second leg, Mikkelsen and Fløene continued their dominant performance, finally taking the victory with a margin of more than one and a half minute.

ŠKODA Motorsport supported Oliver Solberg (SWE) had less luck during Rally Hungary’s opening leg. After six stages, he and co-driver Aaron Johnston (IRL) were leading the ERC1 Junior classification and third in the overall rankings. But when a puncture during the seventh stage cost around 45 seconds, they dropped to fifth position. Another flat tire on the last Saturday stage caused an additional time loss of more than one minute, which relegated the Swedish-Irish crew to ninth spot. “These stages are really not easy ones. They are nice roads, but the changes in grip and the surface – going from mud, to lots of mud to dry, then wet – it made it really complicated,” Solberg said. “I really don’t know, how the punctures happened. Honestly, I drove in the middle of the road.”

Emil Lindholm and Mikael Korhonen, another private team in a ŠKODA FABIA Rally2 evo, were even less lucky. The Finns got stuck during the last special stage of the day while lying in fourth position and had to retire.

Oliver Solberg and Aaron Johnston used the second leg to claw back time and positions on the leader board. They eventually stormed back to fourth overall, finishing the day’s classification in second. “The car and the Eurosol Racing Team Hungary have been perfect,” the 19 years old said. “We have worked well together and made some changes to the set-up of the car which have really improved the speed through the weekend.“ Solberg finished third in the ERC1 Junior Championship, collecting valuable points for the European Championship’s main junior class.

Championship Standings ERC (after 4 of 6 rounds)

Andreas Mikkelsen/Ola Fløene powered their ŠKODA FABIA Rally2 evo to seven fastest times on the 16 stages of Rally Hungary – no other crew won more stages than the Norwegian pairing.

The calendar of the 2020 FIA European Rally Championship (ERC)