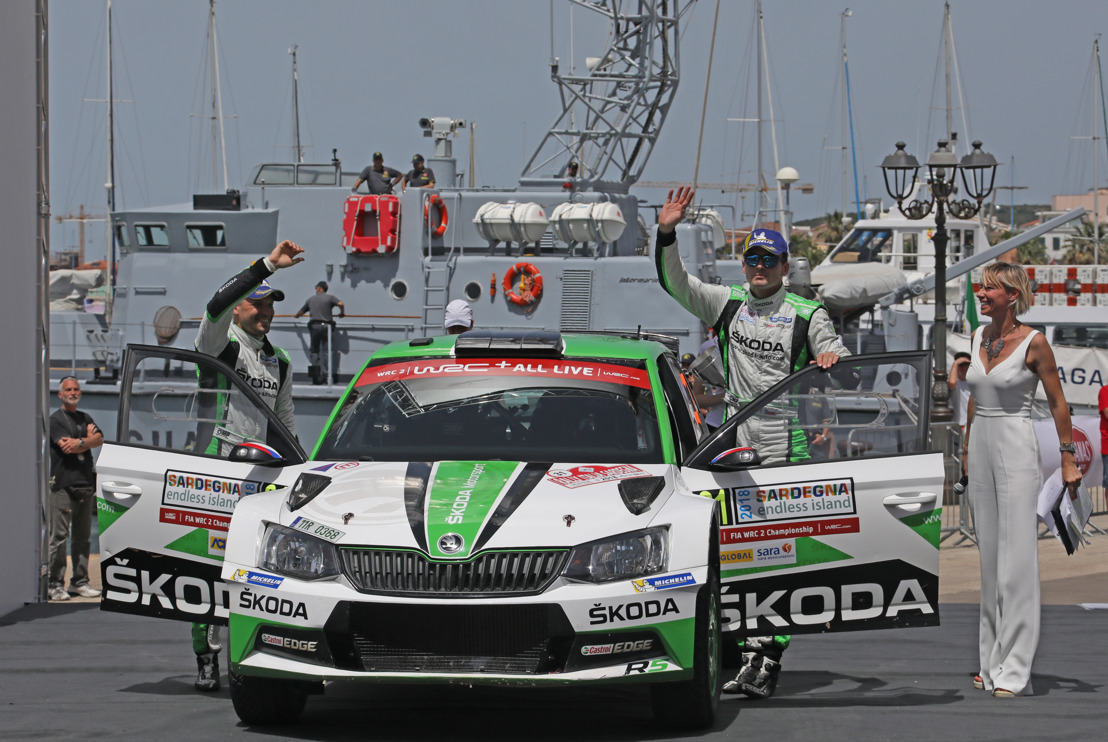 Alghero, 10 June 2018 – Time to celebrate in the beautiful harbour of Alghero on the

double victory, in total the sixth WRC 2 win out of seven rounds of the FIA World Rally

impressive race to catch up. ŠKODA factory drivers Pontus Tidemand (who as planned was

not competing this weekend), Jan Kopecký and O.C. Veiby are now holding the top three

positions of the WRC 2 championship standings.

from their Friday’s mishap, when they were delayed by a suspension issue. During Saturday they

already stormed from eighth to third position with a string of six fastest times. But on the final day of

the rally, they clearly wanted more. On the remaining four stages over 42 kilometres, they tried to

close a 28.2 second gap to second place in the WRC 2 category.

And “O.C.” Veiby and Stig Rune Skjaermoen launched their attack proper on the first Sunday stage

being a full 12 seconds quicker than second placed Hyundai driver Ciamin, closing the gap down to

16.2 seconds! While Jan Kopecký admitted “I am nearly driving around every stone on the track

and want to bring my ŠKODA FABIA R5 and the victory home”, Ole Christian Veiby continued his

massive attack. On the 6.96 kilometres long 18th stage he was again 11.6 seconds quicker than his

rival and reduced the gap to 4.6 seconds. One stage later, Veiby finally managed to conquer

second place, eventually bringing it to the finish in Alghero. With this amazing result, he moved into

ŠKODA Motorsport boss Michal Hrabánek concluded: “What a fantastic performance from Jan and

O.C. alike, which makes me proud and happy! Now we won six out of seven rounds of the WRC 2

category in 2018 and we are on a good way to defend our titles. Concerning the driver’s

championship, Pontus and Jan will do the same number of events until the end of the season and

will have an equal chance in the title fight – may the best win!”

At Rally Italia Sardegna, ŠKODA junior O.C. Veiby won eleven out of 20 stages in the WRC 2