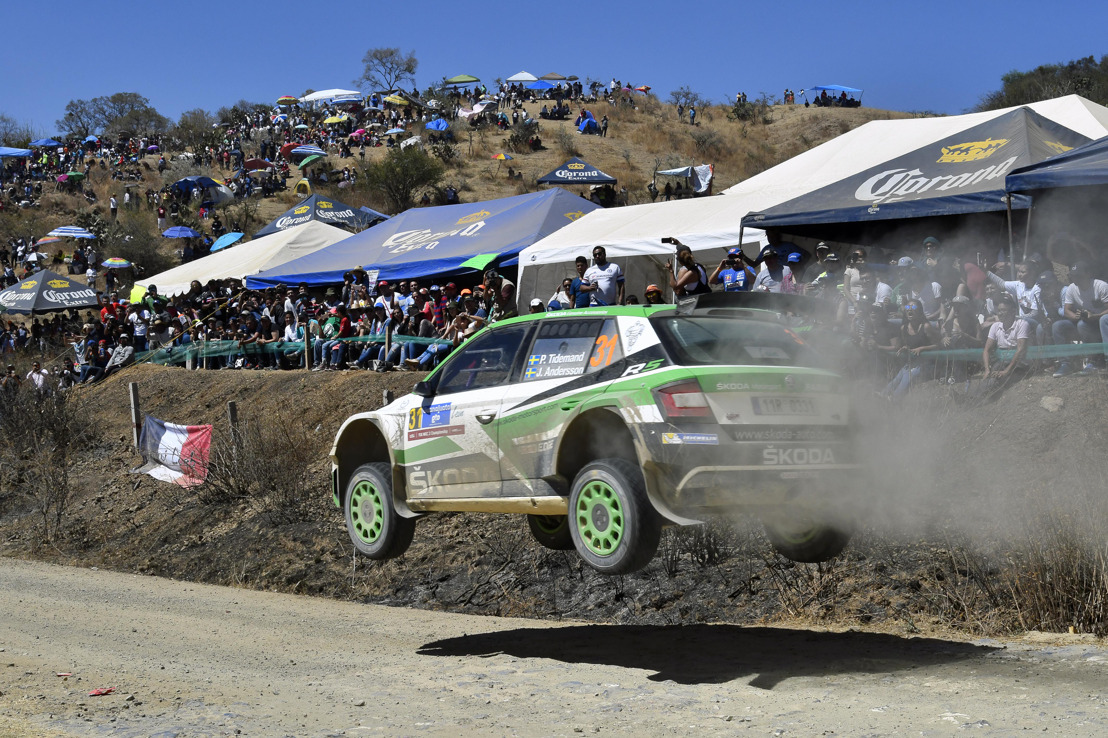 León/Mexico, 10 March 2018 – After three of four days ŠKODA factory crew Pontus Tidemand/Jonas Andersson (SWE/SWE) still control the WRC 2 category at Rally Guanajuato Mexico. The reigning WRC 2 Champions are leading the third round of the 2018 FIA World Rally Championship (WRC) by 5:42 Minutes and moved into 7th position of the overall classification. Teammates Kalle Rovanperä and Jonne Halttunen (FIN/FIN) had to retire on the second stage of the rally after hitting a massive stone. Their ŠKODA FABIA R5 was repaired, and after re-starting on Saturday morning under Rally 2 regulations, they managed an impressive comeback winning four stages and finishing the day in 5th position of WRC 2 category.

After their mishap on the second stage of the rally, Kalle Rovanperä and co-driver Jonne Halttunen had a good re-start on Saturday morning. They won WRC 2 category in the opening stage ahead of their teammates Pontus Tidemand and Jonas Andersson. On the next two stages, the reigning WRC 2 Champion was the fastest driver. Both ŠKODA factory crews seemed to be unbeatable on the tough and demanding gravel stages of Rally Mexico. But the challenge for both drivers was all but easy. "Pontus should be focused to avoid unnecessary risks, for Kalle it is all about getting more experience of the Mexican stages. Our ŠKODA FABIA R5 proved again speed and reliability on tough gravel roads," emphasized ŠKODA Motorsport boss Michal Hrabánek.

Pontus Tidemand, leading the WRC 2 category with a massive lead at the end of the Saturday leg, confessed: "It is very hard to find a really good rhythm, but I think I found it in the end. It is all about a good balance. If you drive too slowly, you lose concentration and the car does not work well." 17 years old youngster Kalle Rovanperä followed the order of the team as well and stressed out: "We have been carefully this morning. After what happened yesterday to us, it is all about learning and getting more experience." Although both ŠKODA factory teams drove concentrated and safely, no WRC 2 competitor could match their speed. During the Saturday leg, between them they won all stages, with Tidemand being quickest five times while Rovanperä scored four best times.

On Sunday (11 March), Rally Mexico features three more stages covering final 46.46 kilometres, including the Powerstage "Las Minas", before the winner will be on the podium on Sunday at 14h30 (local time). Rally Guanajuato Mexico is based in Léon, the country’s fifth largest city some 400 kms north-west of Mexico City.

ŠKODA works driver Pontus Tidemand is not only leading the WRC 2 category at the Rally Mexico, he currently is also holding 7th position of the overall classification.