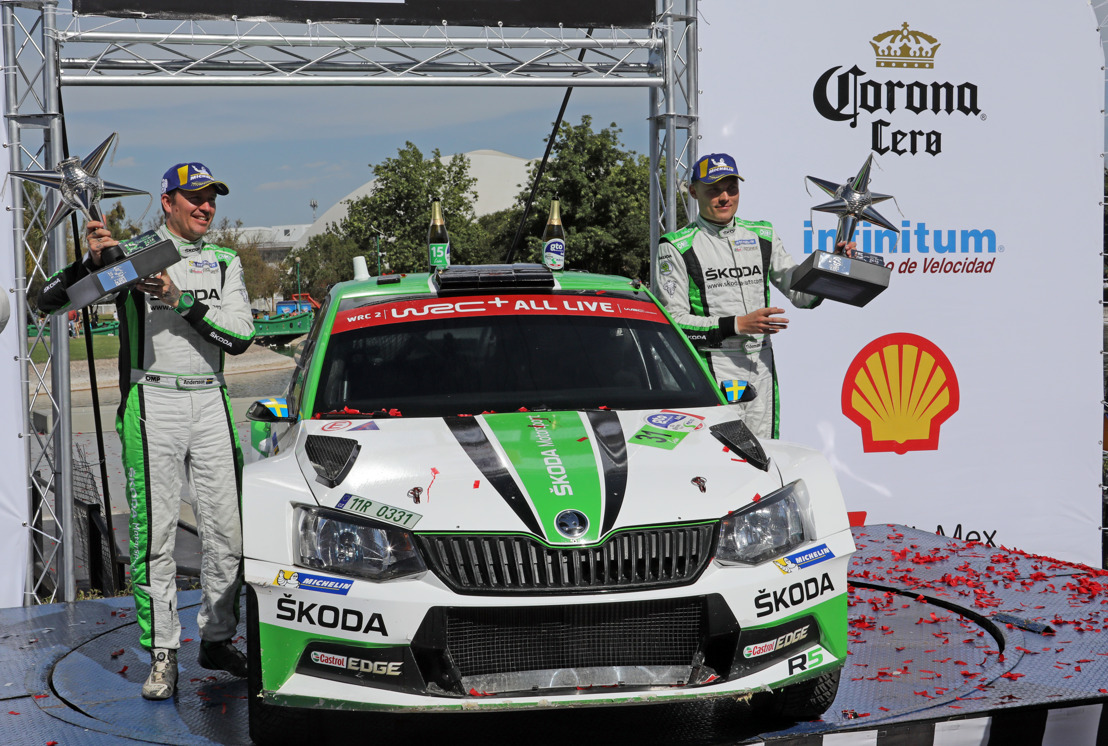 Reigning WRC 2 Champions Pontus Tidemand and Jonas Andersson, driving a ŠKODA FABIA R5, proved their speed and reliability on the tough gravel roads of Rally Mexico, third round of the FIA World Rally Championship 2018. With a faultless drive they led from start to finish, won 17 of the 22 special stages and could repeat their Mexico victory of last year.

Their ŠKODA FABIA R5 was well prepared for the tough conditions in Mexico. The race engines not only had to face the heat of 30 degrees Celsius and more. The stages also reached extreme altitudes, the highest point at 2,737 metres. The correct engine mapping was crucial, because the thin air causes a power loss of more than 20 per cent. While a lot of other teams struggled under these conditions, Tidemand’s ŠKODA FABIA R5 was running like clockwork. The Swedish pairing moved as well into the lead of the WRC 2 category standings. Driving his 24th rally within the WRC 2 since 2014, Pontus Tidemand continued to build up an impressive track record: He finished 19 times on the podium including nine victories, which makes him the most successful driver in WRC 2 history.

On Sunday, the final day of Rally Mexico, Tidemand set another two fastest times, totalling 17 stage wins. "I have to thank the whole team for the great support. My ŠKODA FABIA R5 was really fantastic, and it was a real pleasure to drive it on these gravel roads," said Tidemand.

After they hit a stone on the second stage of the rally, 17 years old Kalle Rovanperä and co-driver Jonne Halttunen could re-start under Rally 2 regulations on Saturday morning. They set five fastest times, and Rovanperä was happy to finish his first rally for the factory team ŠKODA Motorsport. "It´s a pity, that we had this mishap on the second stage. But I am happy that the team could repair my car, so that I could continue on Saturday and Sunday to get more valuable experience of the World Rally Championship. For my next WRC rally, I will benefit from what I learnt in Mexico," commented the Finnish youngster.

"Congratulations to Pontus and Kalle. Between them they set all fastest times of the WRC 2 category for ŠKODA, proving speed and reliability at the same time," emphasized ŠKODA Motorsport boss Michal Hrabánek on the podium in León, the country’s fifth largest city some 400 kms north-west of Mexico City.

ŠKODA works driver Pontus Tidemand did not only win the WRC 2 category of Rally Mexico in a dominant way, he also conquered 7th position of the overall classification.