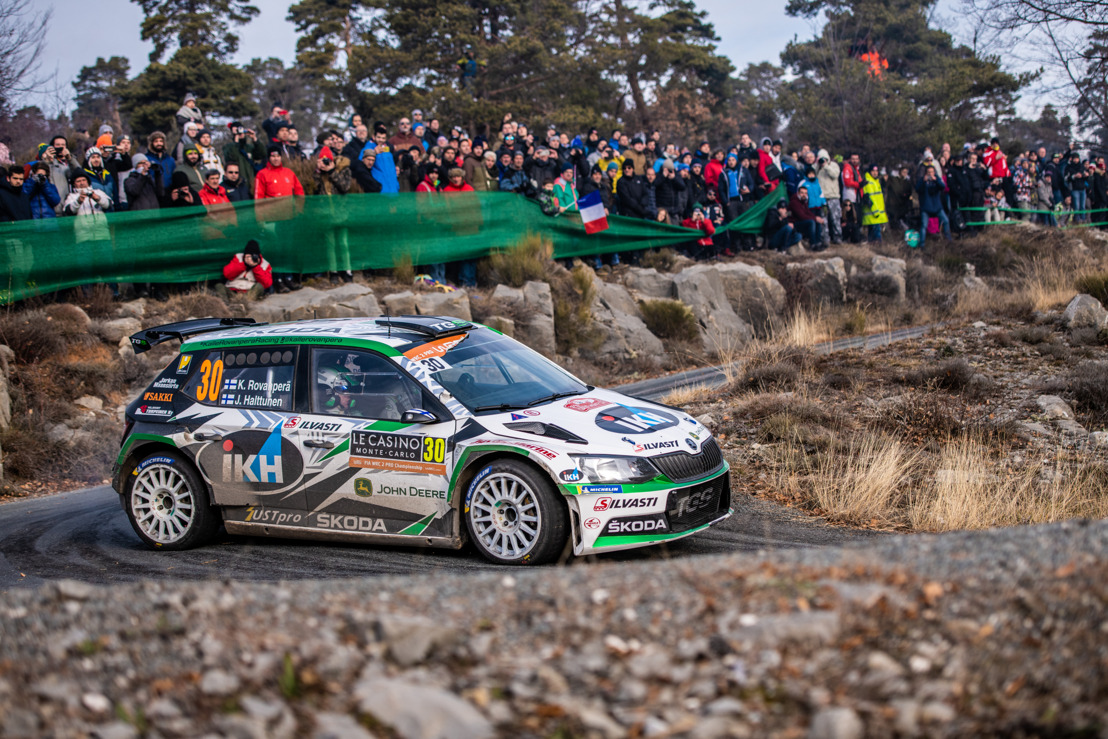 Monte-Carlo, 27 January 2019 – Giving up was never an option for Kalle Rovanperä and Jonne Halttunen at the opening round of the FIA World Rally Championship 2019, the Rally Monte-Carlo (24/01/–27/01/2019). After they dropped down to last position overall due to an accident during the first stage, they started a race to catch up and finished at the end 11th among the R5 cars and got valuable championship points for the second place in the new WRC 2 Pro category.

It was a cold and icy night when on Thursday the crews headed out from the city centre of Gap to the first special stage in the French Alps. Finnish youngster Kalle Rovanperä and co-driver Jonne Halttunen got caught during the very first special stage. The ŠKODA FABIA R5 slid off the road into a ditch and even hit the car of Teemu Suninen, who had stranded in exactly the same place before. In the pitch-dark night, Kalle and Jonne had to carry out emergency repairs including replacement of two broken wheels. Due to a time loss of more than twelve minutes, they dropped down to last position on the leader board. After that, they had to drive another stage, but finally reached, thanks to the robustness of their ŠKODA FABIA R5, the service halt in Gap, where the mechanics repaired the car. "What a shame, but no excuses, it was my mistake," confessed Kalle Rovanperä.

But giving up was not an option for the two Finns. On Friday morning, Kalle Rovanperä started a race to catch up. From there on, his mission was to bring the ŠKODA FABIA R5, which by now was again in a perfect condition, to the finish line in Monte-Carlo to collect championship points for the new WRC 2 Pro category. The first stage of the day had to be cancelled due to spectator masses no longer controllable by the marshals. But on stage 5, Rovanperä using two slick and two studded tyres in a so-called cross over configuration, was quickest amongst the field of R5 cars. "I got a good rhythm, the car feels okay and I am improving," was his comment. The remaining two stages of the day were mostly dry, Kalle Rovanperä kept on improving all the time. "Today has been going quite well. We started carefully because of yesterday. I think everything has improved today – also the notes from our ice crew have been better," was his comment. In the last special stage of the day, he set another quickest time amongst the R5 cars.

The Saturday leg started with another setback for Kalle Rovanperä and Jonne Halttunen. During the longest stage of the rally, the 29.82 kilometres between Agnieres en Devoluy and Corps, they collected a puncture, which they had to change on the stage. The next special before the service halt brought unpredictable road conditions with a mix of ice patches and dry passages. Kalle Rovanperä had a clean run and set the same time as category leader Gus Greensmith before heading to the midday service in Gap. "There was a lot more ice than expected, and I had no studs left on my tyres," Rovanperä said.

form, again being quickest amongst the R5 crews and even setting the eighth fastest time in the overall classification.

On the final day of the rally, Kalle Rovanperä and Jonne Halttunen again delivered a faultless performance and brought their ŠKODA FABIA R5 to the finish at the harbour of Monte-Carlo. ŠKODA Motorsport boss Michal Hrabánek commented: "Kalle and Jonne proved a great moral. The championship points they collected could make the difference for them at the end of the season!"

Current championship standings WRC 2 Pro (after one of 14 rounds)

*WRC 2 Pro, which was introduced at Rally Monte Carlo, is a new category within WRC 2 exclusively for factory crews. Factory teams from ŠKODA, Ford and Citroën are registered for the WRC2 Pro championship, two crews made it to the finish in Monte Carlo.

In their race to catch up after an accident during the first special stage of Rally Monte Carlo, ŠKODA factory crew Kalle Rovanperä/Jonne Halttunen moved up from 84th to 18th position in the overall standings, improving 66 positions in the general classification.

› was founded during the pioneering days of the automobile in 1895, making it one of the longest-established automobile companies in the world.

› currently offers its customers nine passenger-car series: the CITIGO, FABIA, RAPID, SCALA, OCTAVIA, KAROQ, KODIAQ, as well as the KAMIQ and the SUPERB.

› delivered more than 1.25 million vehicles to customers around the world in 2018.

› has belonged to Volkswagen Group since 1991. The Volkswagen Group is one of the most successful vehicle manufacturers in the world. In association with the Group, ŠKODA AUTO independently develops and manufactures vehicles, as well as components such as engines and transmissions.

› operates at three locations in the Czech Republic; manufactures in China, Russia, Slovakia, Algeria and India mainly through Group partnerships, as well as in Ukraine and Kazakhstan with local partners.

› is pressing ahead with the transformation from a traditional car manufacturer to the ‘Simply Clever company for the best mobility solutions’ as part of the ŠKODA 2025 Strategy.