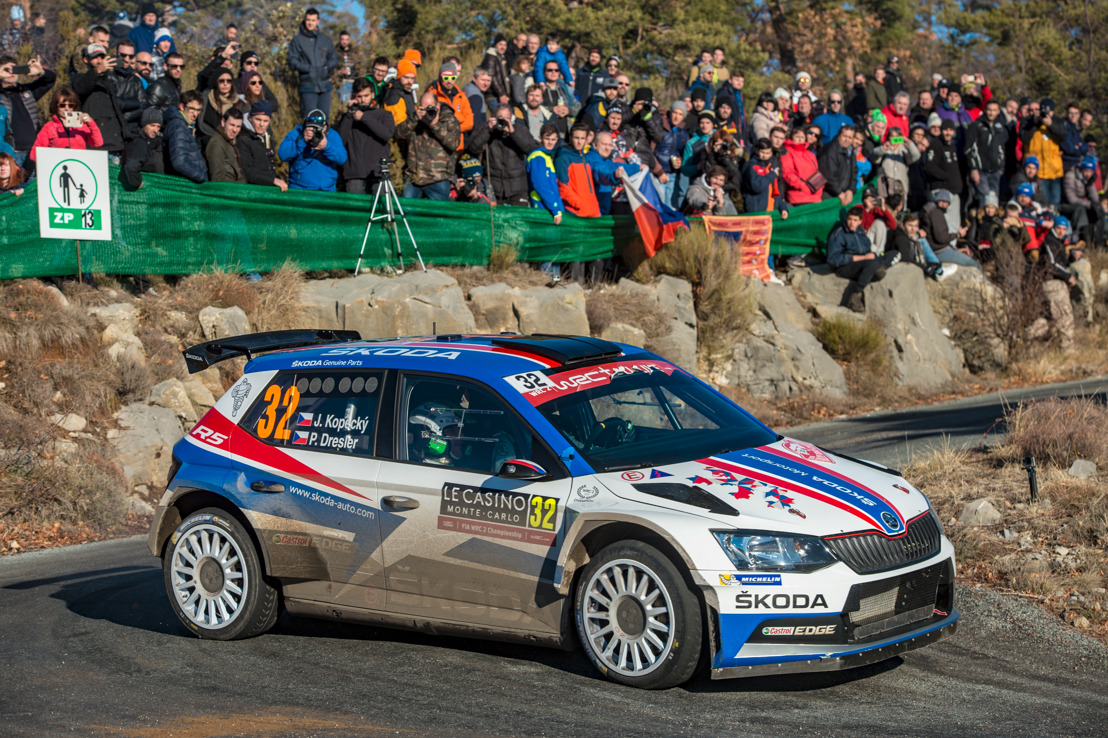 Monte-Carlo, 28 January 2018 – ŠKODA’s Jan Kopecký and co-driver Pavel Dresler (CZE/CZE) convincingly won the WRC 2 category at the season opener of the 2018 FIA World Rally Championship (WRC), the famous Rally Monte-Carlo. They took top spot after the fourth of 17 special stages and defended their lead up to the finish in Monte-Carlo despite very challenging road and weather conditions. On his birthday, Kopecký rewarded himself with the gift of not only winning the WRC 2 category, but also taking victory in RC 2 class and finishing 10th overall. While ŠKODA junior Ole Christian Veiby had to retire on Saturday due to a driver’s error, teammate Kalle Rovanperä and co-driver Jonne Halttunen (FIN/FIN) brought home their ŠKODA FABIA R5 on second place in RC 2 class after a fast and controlled drive under difficult conditions.

Night stages, bright sunshine, rain, dry roads, so-called black ice, slushy snow and fog: The opening round of the 2018 FIA World Rally Championship (WRC), the famous Rally Monte-Carlo, offered all kinds of road and weather conditions. On the last four stages on Sunday – including two passages over the legendary Col de Turini – again sheets of black ice and gravel on the asphalt roads made life difficult for the crews.

But on Sunday afternoon in front of the Royal Palace in Monte-Carlo, all the difficulties and challenges were forgotten. The sun was smiling from the azure blue sky – and so was Jan Kopecký (CZE). After four tough and challenging rally days, he received royal gifts on his 36th birthday: the trophies for winning WRC 2 category and RC 2 class. "During the last stages, it was really a challenge to stay focussed, find the right speed and to avoid any mistake. I had nothing more to gain but so much to lose. Now, a dream came true. On my seventh participation I could finally win. Many thanks to my co-driver Pavel Dresler and as well to the whole ŠKODA team for giving me such a fantastic car. The special design of my fantastic ŠKODA FABIA R5, which carries the tricolour of the Czech flag, brought me the luck you need to win this very special event," beamed a happy Jan Kopecký.

ŠKODA factory team Jan Kopecký and Pavel Dresler headed WRC 2 category already after the fourth stage of Rally Monte-Carlo, defending the lead both in WRC 2 and RC 2 class during four challenging days up to the finish in Monte-Carlo. They survived a hairy moment in the slushy snow of the ninth stage when Kopecký lost control of his ŠKODA FABIA R5 for a moment. After a lucky escape, he continued conservatively to the stage finish and up to the end of the rally. In the end Kopecký/Dresler won WRC 2 category by nearly 15 minutes, being first in RC 2 class as well with a margin of more than five minutes.

In the wake of the Czech Champions the youngest driver of the event, 17 years old ŠKODA youngster Kalle Rovanperä (FIN), and co-driver Jonne Halttunen (FIN) delivered a stunning performance, cheered by thousands of fans alongside the special stages. They were not entered in WRC 2 category, thus not fighting for championship points on this occasion. "I was here to learn. This was a very challenging event, I really enjoyed driving here with my fantastic ŠKODA FABIA R5. On the last stages, I was really cautious to bring home this result," said a delighted Rovanperä at the finish.

ŠKODA juniors Ole Christian Veiby/Stig Rune Skjaermoen (NOR/NOR) had to retire on Saturday afternoon. With a spin-caused contact with a barrier their ŠKODA FABIA R5 suffered damages too extensive to continue.

ŠKODA Motorsport boss Michal Hrabánek was totally happy at the finish in Monte Carlo. "After he was second on last year’s RalIy Monte-Carlo, Jan took a well deserved win this year. With all his routine and speed, he was simply unbeatable! Kalle’s performance was incredible! This guy has what it takes to be a future champion. He showed pure speed combined with cleverness under the most difficult road conditions you can imagine," commented Hrabánek.