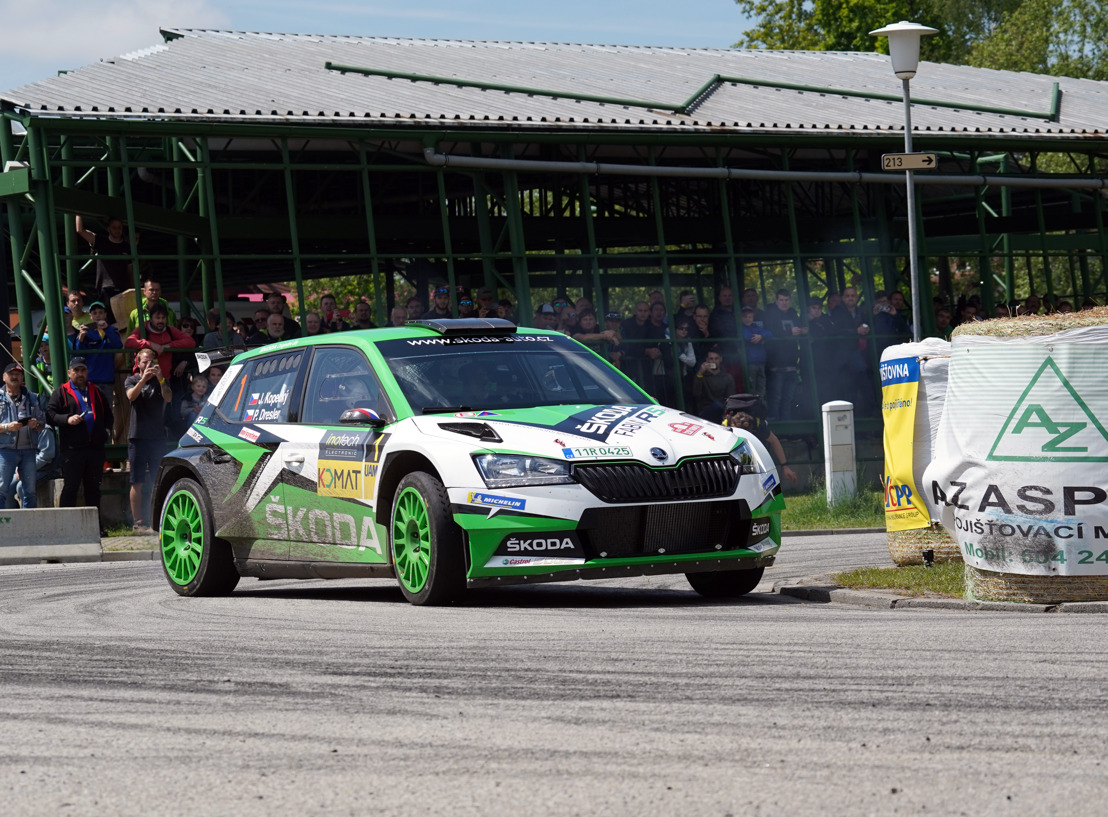 Mladá Boleslav, 29 May 2019 – After intensive testing, the freshly homologated ŠKODA
FABIA R5 evo will be seen for the first time in the FIA World Rally Championship. Like the
successful predecessor in 2015, the updated Czech rally car will debut at Rally Portugal
(30/05/–02/06/2019). Jan Kopecký and Pavel Dresler (CZE/CZE), fresh from winning the
recent round of the Czech Rally Championship (Rally Český Krumlov) on the ŠKODA FABIA
R5 evo’s maiden competition outing, are highly motivated for their return to world
championship level. Their ŠKODA teammates Kalle Rovanperä and co-driver Jonne
Halttunen (FIN/FIN), who won the WRC 2 Pro category at Rally Chile, want to move up further
in the championship standings with a good performance in Portugal.
Four years ago, the ŠKODA FABIA R5 started its famous career on the tough gravel roads of Rally
Portugal. Up to now, 273 cars have been sold to customers worldwide. During that time, ŠKODA
Motorsport won four times in a row the WRC 2 Team Championship. ŠKODA crews celebrated
747 category victories as well as 56 regional and national championship titles. Esapekka Lappi,
Pontus Tidemand and Jan Kopecký became WRC 2 Drivers Champions. Now the moment of truth
has come for the car’s successor: The ŠKODA FABIA R5 evo, homologated by the international
motorsport federation FIA and therefore eligible for competition, will make its debut in the FIA World
Rally Championship at the upcoming Rally Portugal.
“We are happy, that our newly homologated ŠKODA FABIA R5 evo was reliable and fast already
on its debut one week ago, giving Jan and Pavel a trouble-free run to win the third round of the
Czech Rally Championship, the Rally Český Krumlov. After a proper testing program, we are eager
to see the improved ŠKODA FABIA R5 evo for the first time on world championship level,” says
ŠKODA Motorsport boss Michal Hrabánek.
“Our first WRC 2 Pro win of the year at Rally Chile tasted pretty good, especially because we didn’t
have a great start into the season. It was great to be back on the top step of the podium,”
comments Kalle Rovanperä on the past round of the FIA World Rally Championship. “After Jan’s
victory on Czech tarmac we now want to show the potential of our new ŠKODA FABIA R5 evo on
the Portuguese gravel roads”, he adds. Again, ŠKODA is with 15 entries strongest brand among
the 32 cars in the R5 category.
After moving back to the north of the country to the region around Porto in 2015, the Rally Portugal
is one of the most spectator-crowded events of the FIA World Rally Championship. The notorious Fafe jump alone every year attracts ten thousands of spectators. The atmosphere along the stages
is only comparable to a football stadium.
The rally starts on Thursday (30 May) in the scenic town of Coimbra. The first full rally day on
Friday (31 May) features the return to the famous Arganil region with six stages plus the show
stage in Lousada, in total covering roughly 90 kilometres. Like in 2018, the Saturday leg (1 June) is
the longest, running over more than 165 kilometres divided into eight special stages with a mixture
of sandy roads, rocks and deep ruts for the second pass of the stages. The right tyre choice,
considering soft compounds for more traction and hard compound in order to manage tyre wear on
the long stages, will be one of the keys to success. On Sunday (2 June) the spectacular Fafe loop
with five stages on fast and smooth gravel roads, including the famous jump, is the spectator
highlight of the event. In total, the teams face 20 special stages totalling 306.97 kilometres. At
14h20 the winner will reach the podium in Matosinhos close to the city of Porto.
Did you know...
...that Rally Portugal was first held in 1967 and in 1973 was one of the founding events of the then
new World Rally Championship?
...that until 1994 the rally traditionally started in Estoril close to Lisbon and the first leg was held on
tarmac, before it became an all gravel-event in 1995?
...that from 2007 to 2014 the rally was held in the Algarve region before moving back to the north?
…that the ŠKODA FABIA R5 made his FIA World Rally Championship debut at Rally Portugal
2015, while the newly homologated ŠKODA FABIA R5 evo will be seen in the WRC for the first time
during the 2019 event?
…that Rally Portugal will return to the famous stages around Arganil for the first time since 2001?
...that in 2012 world champion to be Sebastién Ogier won his class with a ŠKODA FABIA S2000
and finished an impressive 7th overall, while Esapekka Lappi was the WRC 2 winner with a ŠKODA
FABIA S2000 in 2013?