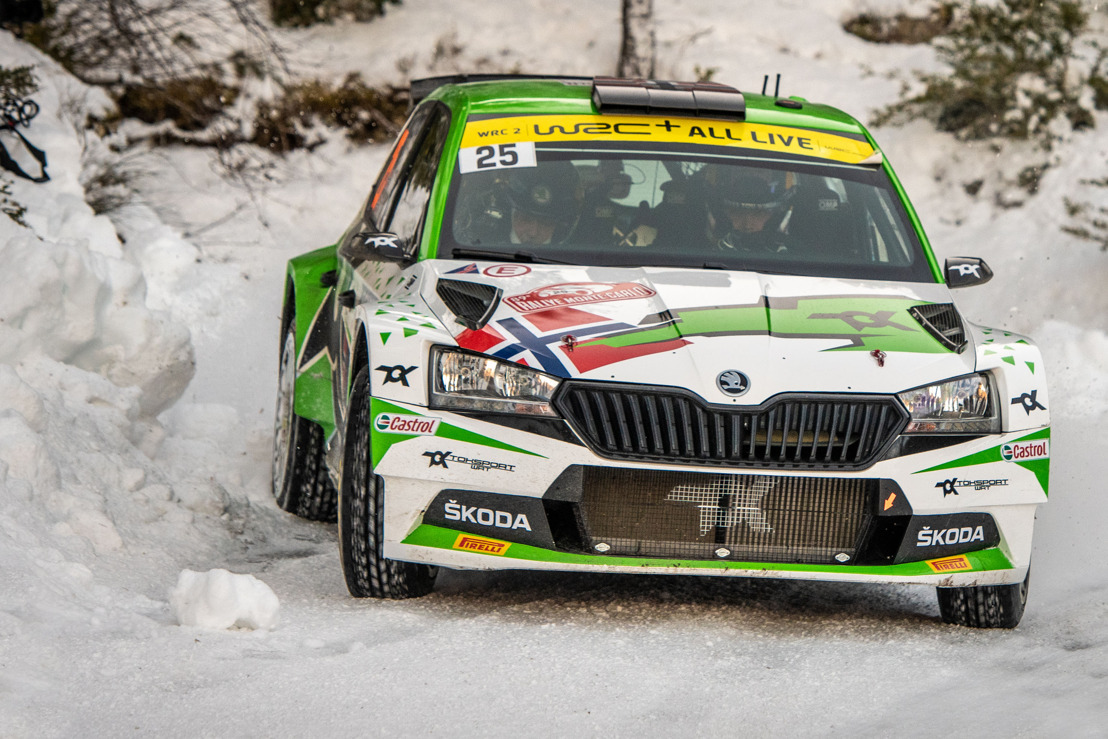 Monte-Carlo, 24 January 2021 – They came, saw and won. On their return to WRC2, ŠKODA Motorsport supported Andreas Mikkelsen (NOR) and co-driver Ola Fløene (NOR) took WRC2 victory at Rallye Monte-Carlo (21-24 January 2021). Their success at the same time marked the first victory for the updated 2021 generation of the ŠKODA FABIA Rally2 evo. By also winning the “Power Stage”, the two Norwegians start their 2021 campaign with the maximum of 30 championship points. Driving the second ŠKODA FABIA Rally2 evo of team Toksport WRT, WRC2 newcomers Marco Bulacia/Marcelo Der Ohannesian (BOL/ARG) end their “Monte” debut on fourth position in the category.

Perfect debut for the corporation between ŠKODA Motorsport and Toksport WRT, the 2020 WRC2 Team Champion. Andreas Mikkelsen and co-driver Ola Fløene (ŠKODA FABIA Rally2 evo) dominated WRC2 during all three legs of the 2021 FIA World Rally Championship season opener. They took the category lead after the second stage, held in the Alps close to the French winter sports town of Gap. Arriving in Monaco on Saturday evening, the experienced Norwegians had extended the category lead to more than two minutes. During the first three stages of Sunday morning in the mountains above the Principality, snow and ice covered roads caught out more than one competitor. Mikkelsen opted for a safe approach and saved the tyres of his ŠKODA FABIA Rally2 evo for the rally ending “Power Stage”. This strategy worked perfectly. With relatively fresh rubbers, Mikkelsen/Fløene as well were a class of their own in WRC2 during the very last stage, collecting five extra championship points.

“An absolutely amazing weekend. It’s been a long time since I had so much fun during a rally,” Mikkelsen commented. “Toksport WRT did a flawless job, the ŠKODA FABIA Rally2 evo worked perfectly. The setup was great, the car very stable even in these constantly changing road conditions. We didn’t have one single big moment.“

A fine fourth in WRC2 ended a more than difficult “Monte” debut for Marco Bulacia at the wheel of Toksport WRT’s second ŠKODA FABIA Rally2 evo. With very limited knowledge of driving on snow and ice, the 20 years from Bolivia and Argentinian co-driver Marcelo Der Ohannesian even posted a handful of top three WRC2 stage times.  “When we did the pace notes before the start, I didn’t imagine the rally to be that difficult,” admitted Bulacia. “Luckily, the ŠKODA FABIA Rally2 evo makes live of a driver a lot easier in such challenging conditions.”

Following a Rallye Monte-Carlo tradition, only the fastest 50 of the originally 79 competitors were eligible to start the last leg on Sunday. With eleven ŠKODA crews amongst them, the Czech brand fielded the majority during the final day of the legendary event

Next stop for the FIA World Rally Championship is the Arctic Lapland Rally in Finland (25-28 February 2021), a newcomer to the WRC calendar. With the base in Rovaniemi close to the polar circle, the competitors await proper winter conditions. “I haven’t driven the ŠKODA FABIA Rally2 evo in these conditions,” WRC2 winner Andreas Mikkelsen looked ahead. “But if it works only nearly as good in Finland as it worked during Rallye Monte-Carlo, our competitors have something to fear.”

Number of the day: 8
On their way to WRC2 victory, Andreas Mikkelsen and co-driver Ola Fløene (ŠKODA FABIA Rally2 evo) were fastest of the category on eight out of 14 stages.