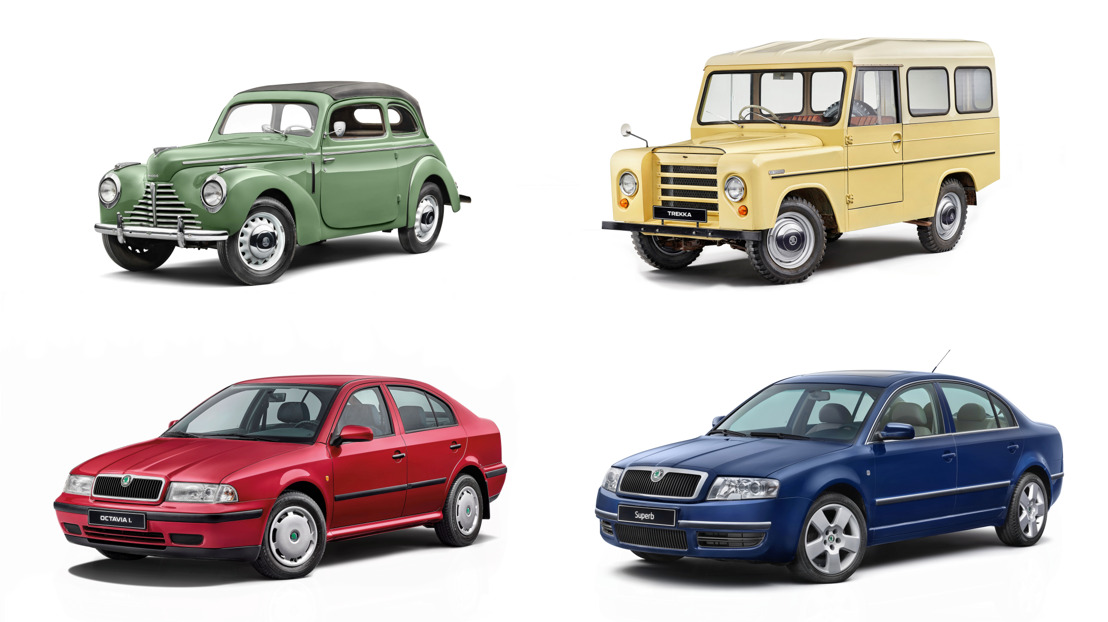 Mladá Boleslav, 28 December 2020 – Next year, ŠKODA AUTO will be commemorating numerous important anniversaries: following the 125th anniversary of the company’s founding this year, the car manufacturer will be celebrating its 30-year affiliation with the Volkswagen Group in 2021. In addition, the company will be able to look back on 120 years of success in motorsports since 1901. In 2021, important models in the portfolio will also be marking milestone anniversaries; ŠKODA will be commemorating the market launch of the first modern OCTAVIA generation 25 years ago and the debut of the SUPERB 20 years ago.

120 years of motorsport tradition with technology from Mladá Boleslav

Václav Laurin and Václav Klement founded their company, which would later become ŠKODA AUTO, in late 1895. By the following year, the young company was already producing five different bicycle models, and from 1899, its portfolio expanded to include motorbikes. It was with these that the proud motorsport tradition of the vehicles from Mladá Boleslav began 120 years ago. A legend was created at the very beginning: On 29 June 1901, factory rider Narcis Podsedníček finished the most demanding race of the time – the 1,196-kilometre race from Paris to Berlin – in the saddle of an L&K motorbike. Another great motorsport success will mark its 40th anniversary in 2021: ŠKODA won the European Touring Car Championship brand title in 1981. The ŠKODA 130 RS, also known as the “Porsche of the East”, proved itself on the circuit as the standard-bearer in its class. On 27 September 1981, ŠKODA secured the championship with the agile coupés during the last round of the season in Zolder.

The vehicles from Mladá Boleslav frequently showcased their capabilities at the legendary Monte Carlo Rally. Almost 85 years ago, on 2 February 1936, Zdeněk Pohl/Jaroslav Hausman won second place in the class up to 1500 cm3 in the cockpit of the ŠKODA POPULAR Sport roadster model. This was preceded by the traditional rally to Monaco, which started in Athens for Pohl and Hausman. After covering 3,852 kilometres in challenging winter conditions, the pair reached the finish in Monaco in the POPULAR Sport without any penalty points. ŠKODA also achieved major motorsport milestones in the following decades. Two of these successes will be celebrating round anniversaries in 2021: 60 years ago, the Finnish duo Esko Keinänen/Rainer Eklund won the class up to 1300 cm3 with the ŠKODA OCTAVIA TS at the “Monte”. A success that ŠKODA vehicles confirmed again in 1962 and 1963. A series of four consecutive class victories began 30 years ago when Pavel Sibera/Petr Gross won the classification for cars up to a 2.0-litre capacity and one driven axle at the Rally Monte Carlo for the first time in 1991 with the hatchback model ŠKODA FAVORIT 136 L. They were able to repeat this triumph from 1992 to 1994.

30 years under the umbrella of the Volkswagen Group

The ŠKODA FAVORIT is also closely linked to ŠKODA AUTO’s most important anniversary in 2021. After the Velvet Revolution in November 1989 and the transition to a market economy, it quickly became apparent that ŠKODA needed a strong international partner. The modern design of the compact model FAVORIT sparked the Volkswagen Group’s interest in the Czech car manufacturer in the early 1990s. After intensive negotiations with several potential partners, the car manufacturer became part of the Volkswagen Group 30 years ago, on 16 April 1991.

At that time, ŠKODA was producing almost 200,000 vehicles a year in Mladá Boleslav, but only a single model series. The company operated three production sites in the Czech region of what was then the Czechoslovak Republic. ŠKODA has since risen from regional market leader to a global player. The car manufacturer now offers ten model series and is successful in more than 100 markets worldwide. In addition, the company is consistently expanding its range of electric models and has increased its deliveries more than six-fold in the past three decades.

Significant anniversaries are coming up in 2021 for several models that have made major contributions to this success story. For example, it will be the 75th anniversary of the debut of the ŠKODA 1101/1102 “TUDOR”, which played a key role in the car manufacturer’s successful development in the post-war period. In 1966, 55 years ago, the TREKKA, manufactured in New Zealand, proved that ŠKODA’s robust technology was also suitable for highly specialised applications and the most demanding markets. The angular off-roader was manufactured based on the OCTAVIA SUPER of the time and is also regarded as the forerunner of the ŠKODA SUV family, which is in great demand today.

The first generation of the modern OCTAVIA, the first model to be developed entirely under the umbrella of the Volkswagen Group, also will be celebrating its anniversary in 2021. ŠKODA started series production of the OCTAVIA hatchback 25 years ago in 1996, successfully re-entering the mid-size segment with it. In the meantime, the fourth generation of the OCTAVIA has been released, which boasts the most diverse and sustainable drive portfolio in the series’ history.

In 2001, ŠKODA revived another historical name with the SUPERB: the manufacturer has been competing with it in the large-family-car class for almost 20 years, and the series is now in its third generation. With the SUPERB iV, the car manufacturer presented its first model with plug-in hybrid drive in the first half of 2019.

In the 1930s, ŠKODA proved the robustness and reliability of the technically advanced vehicles from Mladá Boleslav by undertaking demanding long-distance journeys. The highlight of these expeditions 85 years ago was a long-distance trip that took the semi-convertible ŠKODA RAPID once around the world. On the 97-day endurance tour (the actual driving time was only 44 days) globetrotters Břetislav Jan Procházka and Jindřich Kubias covered an average of 630 kilometres per day. In the same year, 1936, Eva and František Alexandr Elstner organised the trip “100 days in a small car”. They covered around 25,000 kilometres across the USA, through Mexico as well as Spain and other European countries in their 1.0-litre ŠKODA POPULAR model. Also 85 years ago, the couple Stanislav and Maria Škulina began their two-year journey to Africa in a SKODA RAPID saloon, covering 52,000 kilometres from Dakar across the equator to Johannesburg in South Africa.