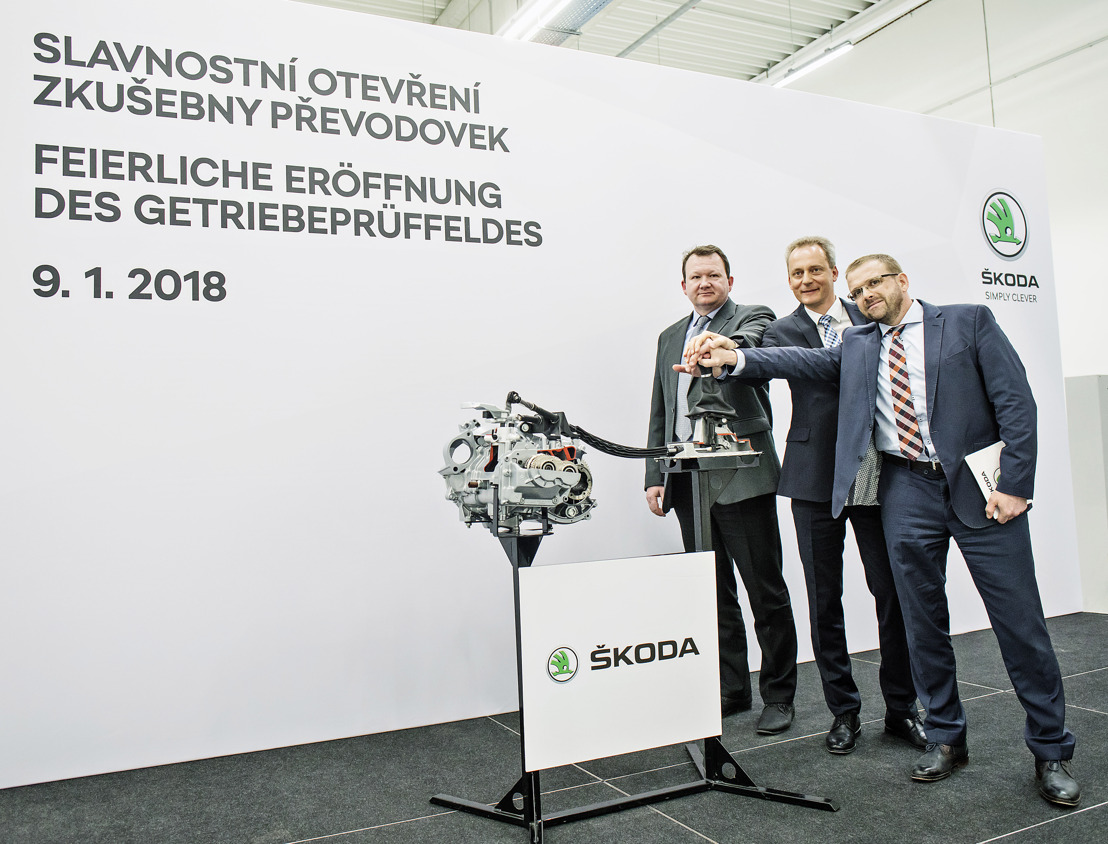 Mladá Boleslav, 9 January 2018 – Today, at its headquarters in Mladá Boleslav, ŠKODA AUTO has put two new gearbox test stands into operation. In doing so, the manufacturer increases its development capacity and reaches a new milestone as a technical centre of excellence within Volkswagen Group. ŠKODA AUTO has invested 5.7 million euros in the construction of the two new gearbox test stands, bringing the total investment in the engine centre’s gearbox development department to more than 8 million euros. ŠKODA AUTO is thereby underlining its important position within Volkswagen Group as a developer and producer of vehicle components such as engines and gearboxes. In 2017, the Czech manufacturer produced 1.16 million gearboxes.

"With the expansion of the engine centre, ŠKODA AUTO now possesses even more technical capacity and is taking on additional responsibility for development within Volkswagen Group," said Christian Strube, ŠKODA AUTO Board Member for Technical Development. "In our technology and development centre, we are using cutting-edge technology to further improve the quality of our production cars," continued Strube. The ŠKODA AUTO Board Member for Technical Development opened the new development facilities this Tuesday, accompanied by Martin Hrdlička PhD, Head of Chassis and Powertrain Development, and Josef Zmrhal, Deputy Chairman of the KOVO Union’s MB branch.

The two new gearbox test stands are taking on complex and demanding development tasks in the gearboxes lab. One stand is used as an acoustic analysis tool for function tests as well as testing a gearbox’s lifespan. On the second test stand, engineers carry out tests on the lifespan of the complete drivetrain. In this way, the test stands assist in the development of new powertrains and the quality control of current production components.

ŠKODA AUTO opened the state-of-the-art engine centre in Mladá Boleslav back in September 2014, thereby greatly expanding the technology and development centre. Together with Volkswagen Group, the manufacturer has invested approximately 53 million euros – 45 million euros in the engine centre and more than 8 million euros in gearbox development. The gearbox centre, which ŠKODA established between 2011 and 2015 with an initial investment of 2.5 million euros, also relocated to this new facility. The decision to further strengthen gearbox development and invest 5.7 million in the two newly opened test stands was made as far back as 2015.

During the start-up phase up to 2015, two engineers worked in the gearbox lab. With the expansion at the end of 2017, the number of employees has risen to 7 and, by 2020, the number of staff is expected to increase to 14.

The Czech manufacturer currently produces three types of gearbox for Volkswagen Group: the MQ100/SQ100 and MQ200 at its headquarters in Mladá Boleslav, as well as the DQ200 in Vrchlabí. In total, ŠKODA AUTO produces around 4,880 gearbox units per day.