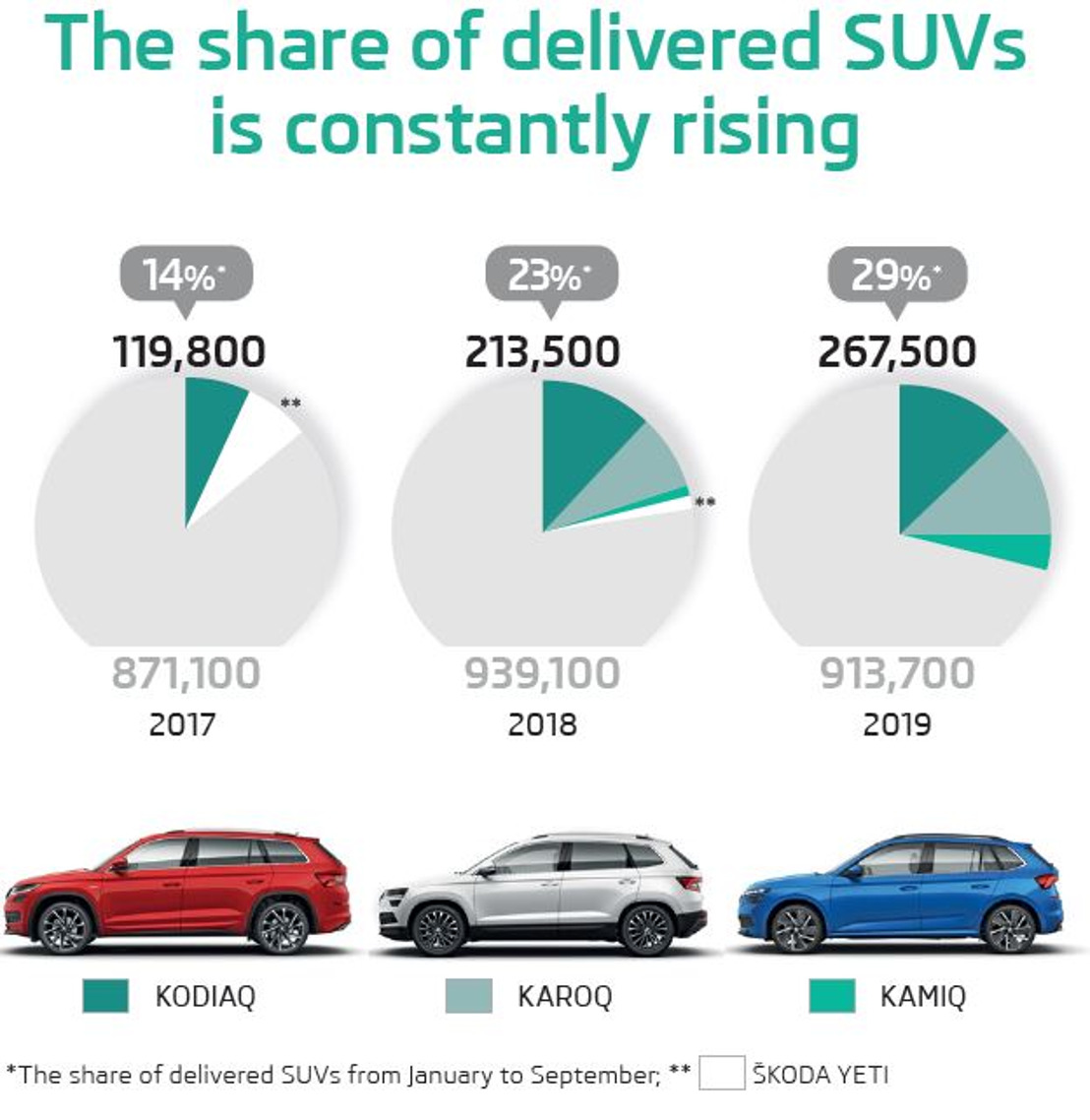 Mladá Boleslav, 4 November 2019 – ŠKODA AUTO continues along the road to success. From January to September, the carmaker increased sales revenue by 17.6% to 14.8 billion euros, setting a best value in the company’s history. Operating profit also remains at a very high level, rising by 8.5% to 1.175 billion euros in the same period, which is slightly below the best result in the brand’s history (first three quarters of 2017: 1.206 billion euros).

ŠKODA delivered 913,700 vehicles in the first nine months of 2019. Compared to the same period last year, deliveries declined by 2.7%, primarily due to the current development of the Chinese car market as a whole. In the other markets, ŠKODA AUTO increased its total deliveries by 4.4% year-on-year to 719,300 vehicles (January to September 2018: 688,900). The KODIAQ and KAROQ were in particularly high demand.

ŠKODA AUTO’s sales revenue increased to 14.8 billion euros in the same period. This value is 17.6% higher than in the first three quarters of last year (January to September 2018: 12.6 billion euros) and sets a new record in the car manufacturer’s 124-year history.

Vehicle sales rose 15.3% to 804,900 units. On the one hand, the increase in sales and sales revenue was a result of the ŠKODA brand’s strong sales performance in a largely declining market environment, and on the other hand due to the Indian business of other Group brands being newly consolidated into the ŠKODA AUTO Group.

Klaus-Dieter Schürmann, ŠKODA AUTO Board Member for Finance and IT, emphasises:,“Despite the turbulent waters, ŠKODA AUTO remains on course. The situation is challenging in many markets. However, we were able to increase our operating profit in the first three quarters. The negative effects of exchange  rates and higher upfront costs for new products were compensated through intensive cost management and active sales management with price and mix improvements as well as volume increases outside of China.”

At 1.175 billion euros after the first three quarters, ŠKODA AUTO’s operating profit remains at a very high level and only slightly below the best result in the company’s history in 2017 (first three quarters of 2017 1.206 billion euros). The 8.5% increase compared to the same period last year is clearly positive. The return on sales of 7.9% at the end of September 2019 (January to September 2018: 8.6%) is still well above the industry average.

In September ŠKODA presented numerous new model highlights at the International Motor Show (IAA) in Frankfurt, including the top-of-the-range MONTE CARLO versions of the SCALA and KAMIQ. The city SUV KAMIQ, which completes the manufacturer’s successful SUV range in Europe alongside the KODIAQ and the KAROQ, is being launched on the first markets and will provide new impetus for growth as ŠKODA’s third model in this vehicle segment.

Slovakia, Russia and Germany (and till 31.12.2018 in India), but including other Group brands such as SEAT, VW and

**** Comprises ŠKODA AUTO Group sales to distribution companies, including other Group brands such as SEAT, VW,