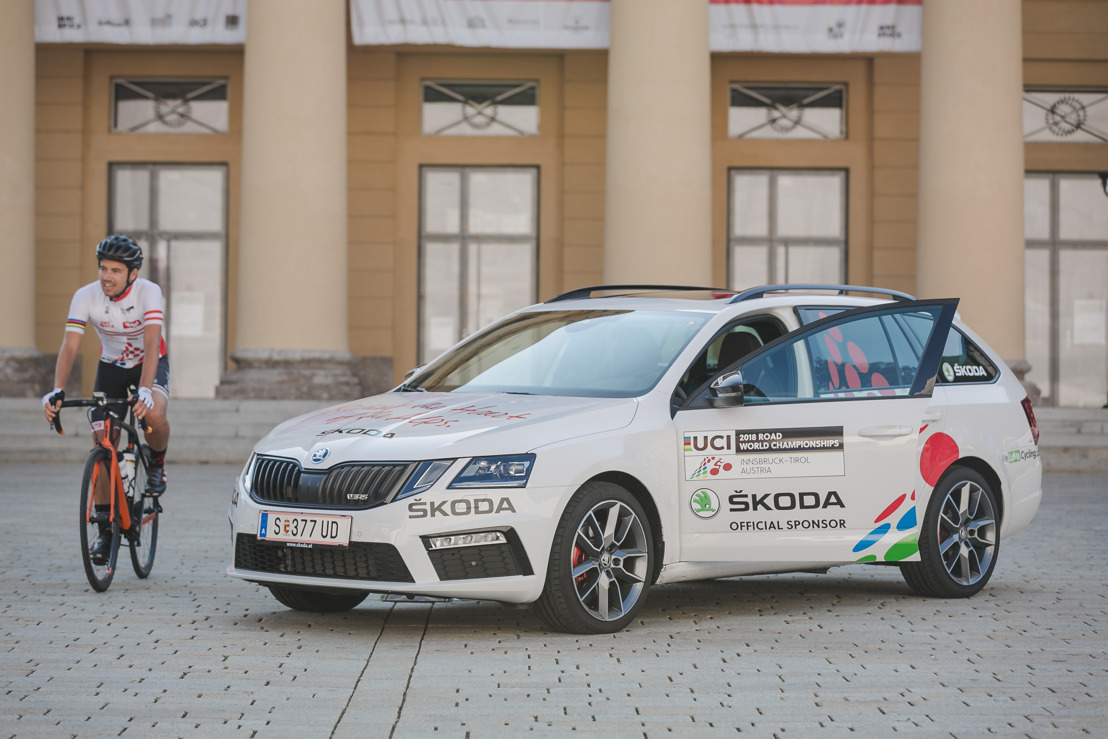 engagement in cycling. The Czech company will be in the limelight as the official sponsor of

the 2018 UCI Road World Championships, which will take place in the Austrian province of

support vehicles for the twelve races that finish in the provincial capital of Innsbruck. In

addition, the ŠKODA logo will appear prominently along the route.

UCI Road World Championships on TV. These will be joined by around 500,000 fans who will be

cheering on the best road cyclists in the world at the edge of the course in the twelve races.

Races. Unlike the Tour de France or the Giro d'Italia, however, the competitors will be competing in

the World Championships for their respective home country and national jersey. This year's motto

is ‘Riding the Heart of the Alps’. The routes lead through the picturesque landscapes of Tyrol and

over extremely challenging climbs with gradients of up to 28 percent.

hand in hand. Our commitment to cycling reflects the ŠKODA brand's unique relationship with the

bicycle, which the company began producing in 1895. With the Tour de France and the Tour of

Spain “Vuelta”, we were already supporting two major events in international cycling as the official

sponsor. Now we are extending our engagement by adding another season highlight – the UCI

Depending on the races, the competition starts in Ötztal, Hall-Wattens, Rattenberg or Kufstein. The

finishing line of all the races is Hofburg at the heart of the Tyrolean capital Innsbruck. The longest

competition – the Men's Elite Road Race with a kick-off in Kufstein – takes place on 30 September,

covering a distance of 254.2 kilometres. The riders will take on around 5,000 metres uphill. A day

earlier, the women's elite will be fighting for victory on the 156.2-kilometer circuit from Kufstein to

Innsbruck, during which they have to master 2,413 metres uphill.

The passion for cycling goes back to ŠKODA AUTO's pioneering years. In 1895, Václav Laurin and

the first automobile of the young company rolled out of the factory halls with the ‘Voiturette A’.

this year, sponsoring the Green Jersey for the best sprinter for the fourth time. In addition, the

automaker also supports the Tour of Spain “Vuelta” and other international cycling races. The brand

accessories are an integral part of the brand's expanded product range.