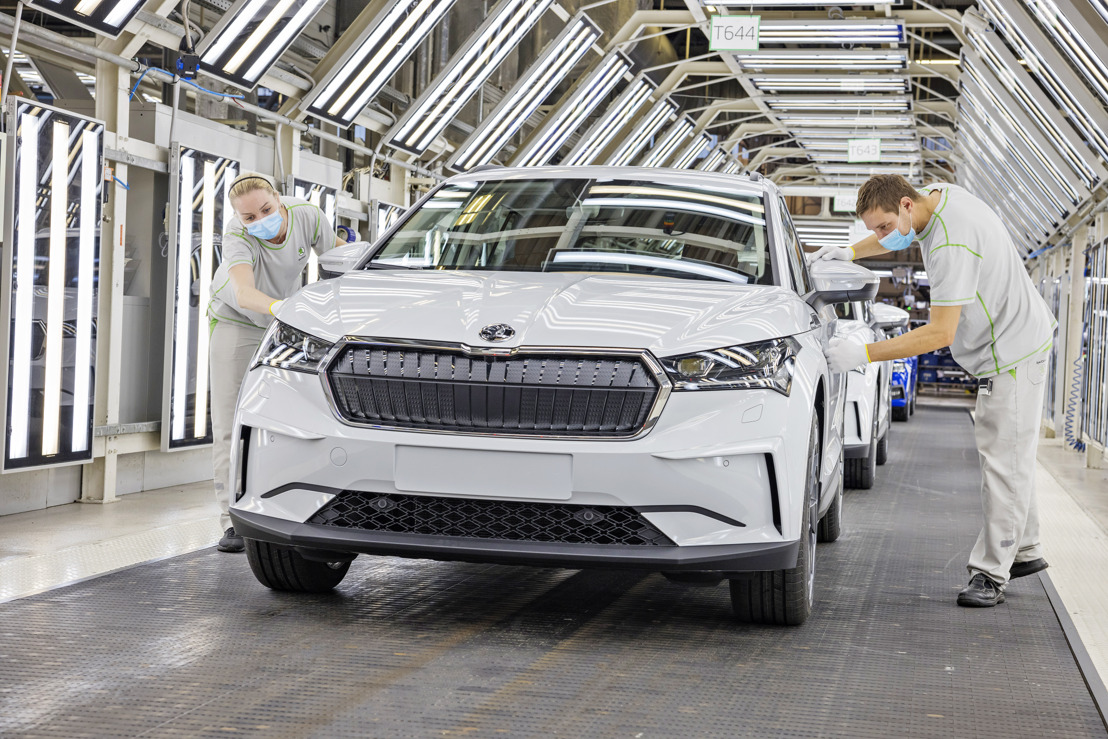 Mladá Boleslav, 25 November 2020 – Series production of the ENYAQ iV starts today at ŠKODA AUTO’s main plant in Mladá Boleslav. The 100% battery-electric SUV is the first ŠKODA series production model based on the Volkswagen Group’s Modular Electrification Toolkit (MEB). In future, the Czech car manufacturer will produce up to 350 units of its new SUV every day alongside the OCTAVIA and the KAROQ series on the Group’s only production line for vehicles based on both the MQB and MEB platforms.

Michael Oeljeklaus, ŠKODA AUTO Board Member for Production and Logistics, emphasises: “The ENYAQ iV is ŠKODA’s first series-production model that was designed as an all-electric vehicle from the outset. This means our new SUV also places entirely different demands on manufacturing processes and production sequences than models with combustion engines. This is also reflected in the extensive preparation and conversion measures that we have been implementing at our main plant in Mladá Boleslav since last summer. Today’s start of production of the ŠKODA ENYAQ iV on the only production line in the Group for vehicles based on the MEB and MQB is a very special moment for our entire team.”

At its headquarters in Mladá Boleslav, ŠKODA has invested 32 million euros in the conversion work required to enable both MEB and MQB models to be produced on the same line. In future, the brand will be manufacturing up to 350 units of the ENYAQ iV here every day in a fully flexible manner alongside the OCTAVIA and KAROQ series. The car manufacturer adapted the building’s statics and designed the technologies for transporting parts to accommodate the weight of the fully battery-electric vehicles and the installed components. In addition, ŠKODA has introduced safety measures in the area of battery handling, for example, by installing thermal imaging cameras. These monitor the temperature in the workshop around the clock and trigger an alarm if any deviation is detected.

Rear or four-wheel drive, sustainable materials in the interior and innovative assistance systems

The ŠKODA ENYAQ iV’s three battery sizes and five performance variants ensure a sustainable yet fun driving experience. In the two most powerful variants, a second electric motor on the front axle works in combination with the rear motor. Depending on the battery size, the range is up to 536 kilometres in the WLTP cycle. Design Selections have replaced the traditional equipment lines for the interior. The harmonised interior options are inspired by modern living environments and use sustainably processed and recycled materials such as wool and leather tanned with plant extracts. The ENYAQ iV is also the first ŠKODA model to feature a Head-Up Display with Augmented Reality, which displays information on the speed and traffic signs in two areas of the driver’s primary field of vision.

In mid-2019, ŠKODA presented the first electric series models in its 125-year history with the fully batteryelectric ŠKODA CITIGOe iV and ŠKODA SUPERB iV with plug-in hybrid drive. At its main plant in Mladá Boleslav ŠKODA produces high-voltage traction batteries that are also used by other Group brands in their models with plug-in hybrid drive. ŠKODA AUTO also emphasises the importance of targeted and comprehensive training in the area of electromobility for employees and apprentices as well as suppliers. To date, more than 16,000 team members have successfully completed the special training courses.