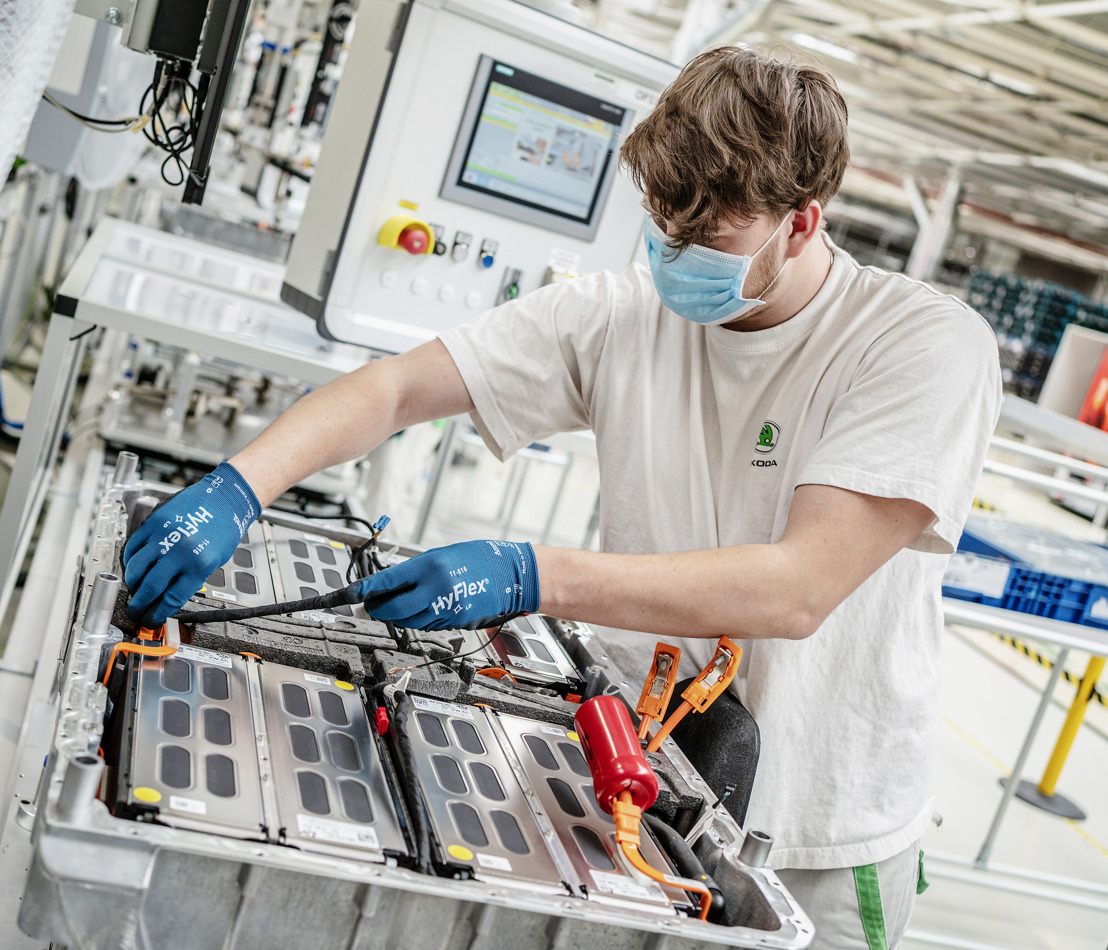 Mladá Boleslav, 9 February 2021 – Today, ŠKODA AUTO manufactured its 100,000th highvoltage traction battery. In order to create the necessary production conditions at the company’s headquarters in Mladá Boleslav, the Czech carmaker invested approximately 25.3 million euros in 2019. An area covering roughly 2,000 m² is now used not only to produce high-voltage traction batteries for the company’s own plug-in hybrid models, but also batteries for plug-in hybrids from the group brands AUDI, SEAT and Volkswagen. The site also boasts state-of-the-art facilities to comprehensively test the batteries and ensure the highest possible safety and quality standards.

Christian Bleiel, Head of Component Production at ŠKODA AUTO, said: “We have now reached the mark of 100,000 high-voltage traction batteries produced. This success is a great testament to our team’s high level of engineering expertise as well as the importance of our component production within the group: our batteries are not just used in the ŠKODA SUPERB iV and the OCTAVIA iV, they are also fitted in plug-in hybrids from the AUDI, SEAT and Volkswagen brands. We currently manufacture almost 800 batteries per day.

Production of the high-voltage traction batteries at the Czech carmaker’s Mladá Boleslav site commenced in September 2019, and has since been gradually scaled up. It takes approximately two hours to manufacture a battery, during which it passes through 66 different workstations. Every 88 seconds, a battery for MQB-based models with plug-in hybrid drivetrain rolls off the production line at the company’s headquarters.

Each shift sees 58 employees working in an area of roughly 2,000 m²; particularly heavy or awkward components are handled by a total of 13 robots. They are designed for weights ranging between 210 and 500 kg and feed the battery modules into the production line, or load the finished battery systems onto pallets.

On the production line, the modules for the left and right halves of a battery pack are processed separately. They are provided with a special heat-conducting film, which dissipates heat and helps to cool the assembled battery system. In addition, a liquid coolant is added between the two modules before they are joined in a solid aluminium housing. All is then prepared for the battery to be installed into the vehicle. Besides the electronics, the battery pack is also provided with all the necessary cable bundles, seals and brackets.

The batteries are subjected to extensive testing before being installed. This includes checking the cooling circuit and that there are no leaks. To ensure that the process works reliably, specially prepared test batteries are introduced at regular intervals. Once the leak test has been performed, the electrical functions are assessed on a total of 13 test benches. This includes, for example, the interaction of high-voltage and low-voltage components as well as a test of the electrical insulation. Finally, each battery system is charged to a portion of its maximum capacity.

More than 16,000 members of staff have already completed the training programmes, which are designed for staff and students as well as employees of the carmaker’s suppliers to prepare them for electromobility. Over the next two years alone, ŠKODA AUTO will invest 45 million euros in the vocational training and professional development of its workforce. In terms of products, the carmaker is gradually electrifying its entire model range and will be investing 1.3 billion euros in new all-electric and partially electrified vehicles as well as in battery production by 2025.