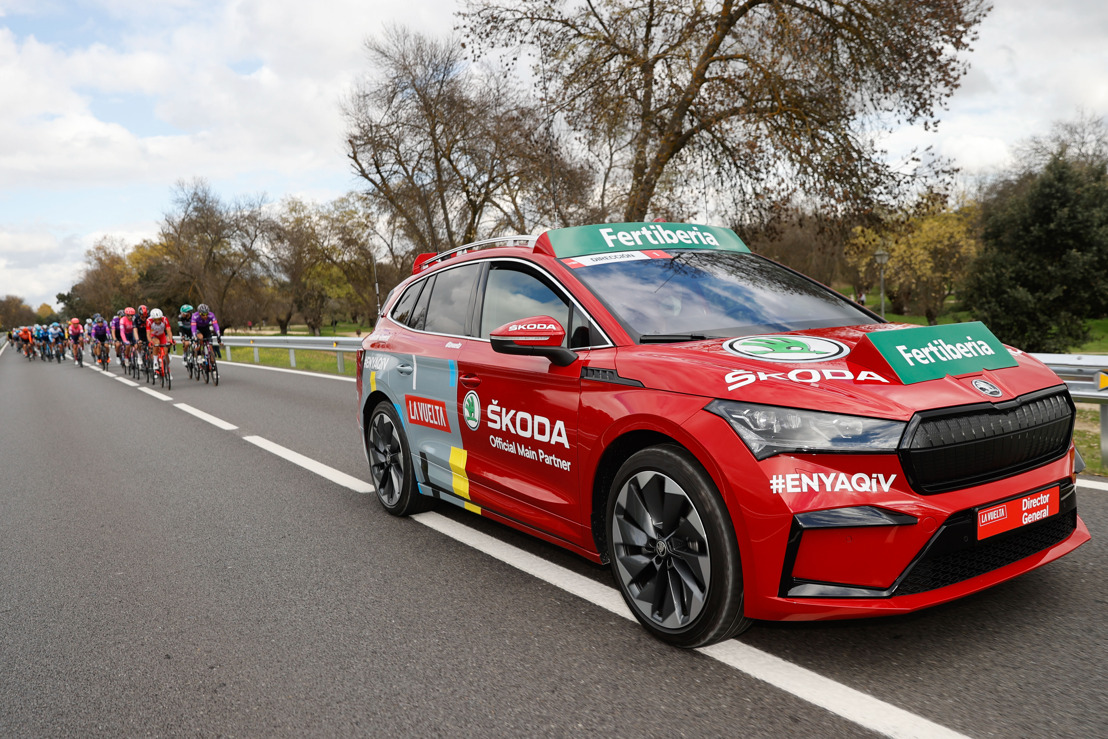 Mladá Boleslav, 9 November 2020 – The peloton of this year’s Spanish tour La Vuelta (20/10–08/11) was accompanied by several ŠKODA ENYAQ iVs. The Czech car manufacturer’s new all-electric SUV was not only part of the 13th stage from Muros to Mirador de Ézaro but also joined the cyclists on the final two stages on 7 and 8 November. One ENYAQ iV was the lead car (Red Car) and mobile control centre for race director Javier Guillén.

This year’s La Vuelta Spanish cycling tour (20/10–08/11/2020) was somewhat shorter than usual due to corona-related restrictions, but was no less spectacular. The 13th stage from Muros to Mirador de Ézaro, for example, included climbs with gradients of up to 20 per cent. On this 33.7-km-long time trial, the ŠKODA ENYAQ iV made its debut as the Red Car for race director Javier Gullién, who until then had been travelling in a ŠKODA SUPERB iV. Another ŠKODA ENYAQ iV was used as the support vehicle for Primož Roglič. The Slovenian cyclist not only secured the overall victory but also won the battle for the ŠKODA-sponsored Green Jersey awarded to the best sprinter.

Fitted with extensive special equipment to ensure smooth operation of the event, the all-electric ŠKODA flagship accompanied the peloton on the final two stages too, and led the cyclists across the finish line in Madrid on Sunday.

Javier Guillén’s red lead car featured among other things, a sliding glass roof in the rear, six antennas, special sirens, a refrigerator and a state-of-the-art communication and command centre. This allowed the race director to maintain contact with the race commissioners and other tour vehicles, and to exchange information with them regarding the status of the race.

The ŠKODA ENYAQ iV is the brand’s first production car based on Volkswagen Group’s MEB modular electric car platform. It is available with rear- or all-wheel drive and, covering up to 536 km in the WLTP cycle, boasts a range that is perfectly suitable for everyday use. Three battery sizes and five power outputs ranging from 109 to 225 kW (148 to 306 PS) cater to many different requirements and uses.

ŠKODA AUTO is the official main partner of La Vuelta, providing the event with vehicles and sponsoring the Green Jersey for the best sprinter. In addition to its commitment to the Spanish cycling tour, ŠKODA is involved as the ‘engine of cycling’ on many other levels too. The car manufacturer is the official partner to the Tour de France – the world’s largest cycling race – and also supports other international cycling competitions. But that’s not it, the Czech brand sponsors numerous national and international popular sports events too. Furthermore, bicycles and bicycle accessories are an integral part of ŠKODA’s extended product range. And on the company’s website We Love Cycling, ŠKODA also publishes a plethora of compelling cycling-related articles, stories and tips.