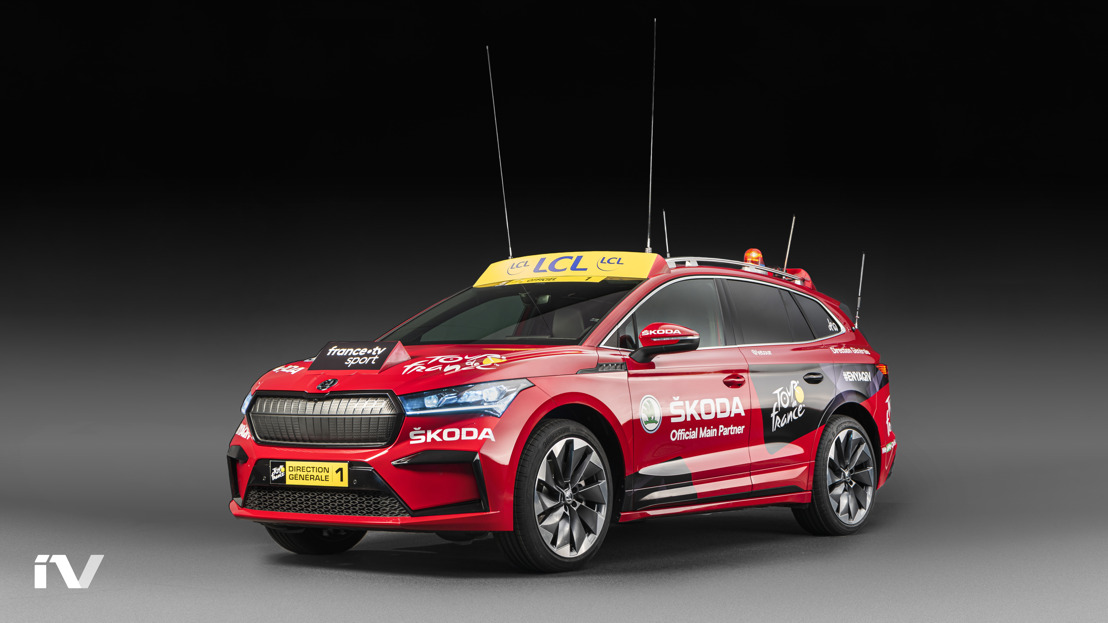 Mladá Boleslav, 1 September 2020 – Following its world premiere in Prague today, the new ŠKODA ENYAQ iV will once again enjoy the international limelight at the start of the Tour de France tomorrow: Director Christian Prudhomme will be using the first ŠKODA model based on the modular electrification toolkit (MEB) as the lead vehicle (‘Red Car’) on the
183-kilometre stage from Gap to Privas. In the coming weeks, ŠKODA’s new, all-electric flagship will accompany the cyclists on two more stages and will be equipped with a wide range of specialised technology to ensure the smooth coordination of the race.

After its world premiere today in the Czech capital, Prague, the ŠKODA ENYAQ iV will demonstrate its sporting qualities as the lead vehicle (‘Red Car’) of the Tour de France tomorrow. The first ŠKODA model based on the modular electrification toolkit (MEB) has been kitted out for its role as the ‘mobile control centre’ for Tour Director Christian Prudhomme.

The red-painted ENYAQ iV has a panoramic glass roof, six antennas, special sirens, a refrigerator and a state-of-the-art communication and command centre in the rear. This equipment allows information to be transmitted to and from the vehicle, and Christian Prudhomme can also give instructions and organise the traffic in the field of participants from here. He will also maintain contact with the race commissioners and other tour vehicles and exchange information with them regarding the status of the race. In addition, the ENYAQ iV has a modified chassis for its use in the Tour de France, making it ideally equipped to meet all the demands of the competition. The body of the vehicle is also customised with the branding of the various companies sponsoring the race. This walkaround video shows how the ENYAQ iV was transformed for the Tour de France. For more information about the car visit WeLoveCycling.com.

In addition to tomorrow’s 183-kilometre stage from Gap to Privas, the new flagship of ŠKODA’s model range will also accompany the cyclists in the individual time trial from Lure to La Planche des Belles Filles and the final 122-kilometre stage. The route takes the participants from Mantes-la-Jolie to Paris, where they will reach the finish on the Avenue des Champs-Élysées after completing
21 stages and a total of 3,470 kilometres.

Up to 250 ŠKODA vehicles deployed at the Tour de France, including 30 with the iV badge

The ENYAQ iV is part of a fleet of up to 250 vehicles that ŠKODA is providing to the organisation and race management during its 17th engagement as the official main partner of the Tour de France. This year, the Czech car manufacturer is emphasising the topics of sustainability and electric mobility: 30 vehicles from the fleet are ŠKODA iV models with plug-in hybrid drive or fully electric drive. Since they symbolise sustainable individual mobility just as the bicycle does, the Tour de France provides a perfect stage to present the vehicles to an international audience.

ŠKODA with a great tradition as the ‘engine of cycling’
In addition to its involvement in the Tour de France, ŠKODA also is active on many other levels as the ‘engine of cycling’. For example, the automaker also supports the Tour of Spain (‘La Vuelta’) and other international cycle races. It also sponsors numerous national and international popular sports events. Bicycles and bicycle accessories are also an integral part of ŠKODA’s extended product range.