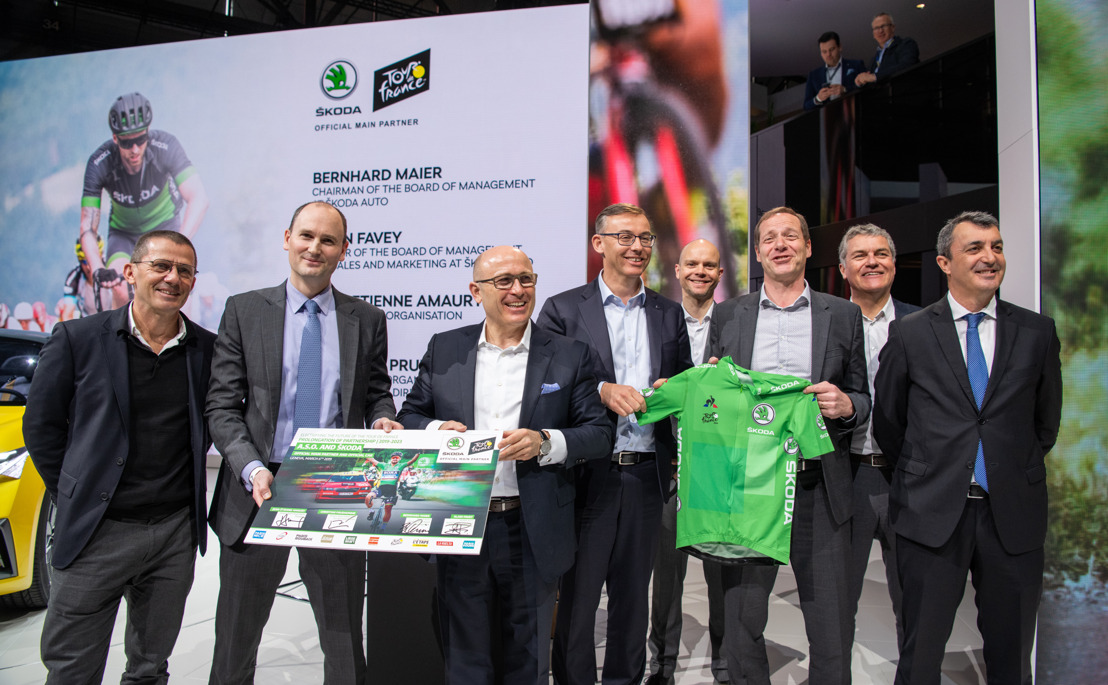 Mladá Boleslav/Geneva, 6 March 2019 – ŠKODA AUTO is extending its commitment to the Tour de France as the official main partner and vehicle partner until 2023. The car manufacturer and the sports event organiser are thus laying the foundation for further joint success after 15 years of successful partnership. ŠKODA AUTO CEO Bernhard Maier and Alain Favey, ŠKODA AUTO Board Member for Sales and Marketing, today signed the contract on behalf of the Czech automobile manufacturer in Geneva. President Jean-Étienne Amaury signed the contract for the Tour de France organiser A.S.O. (Amaury Sport Organization); the Tour de France was represented by its director Christian Prudhomme. The extensive cooperation will include not only the Tour de France partnership but also other cycling races.

Alain Favey, ŠKODA AUTO Board Member for Sales and Marketing, says: “ŠKODA and cycling go hand in hand. The extension of our long-standing partnership with the Tour de France organiser A.S.O. emphasises the ŠKODA brand’s close connection to cycling, and supporting the Tour de France as well as other renowned cycling events is an expression of our 124-year company tradition. Indeed, our brand’s success story began with the production of bicycles in December 1895.”

In addition to the Tour de France, the partnership with the sports organisers includes the La Vuelta, Paris-Nice, Critérium du Dauphiné, Paris-Roubaix, La Flèche Wallonne, Liège-Bastogne-Liège and L'Etape du Tour. ŠKODA is also broadening its commitment to support the Paris-Tours and Volta Catalunya cycling races, as well. During the Tour de France, La Vuelta, Paris-Nice and Critérium du Dauphiné, ŠKODA sponsors the Green Jersey for the rider with the highest number of points.

During the 2018 Tour de France, around 12 million cycling enthusiasts flocked to the circuit, along with approximately 1.4 billion television viewers in more than 190 countries around the globe, making the traditional tour of France the third largest sporting event in the world. The event app powered by ŠKODA AUTO was downloaded to around 1.5 million devices in 2018.

An important part of the ŠKODA’s Tour de France commitment is supporting the event as the official vehicle partner. From the outset, the ŠKODA excels with maximum reliability. Individual teams, as well as race officials and organizers, are also provided vehicles from the traditional Czech manufacturer. For example, the ŠKODA SUPERB serves as the Red Car – a command centre with a retractable glass roof, allowing tour director Christian Prudhomme to stand up in the back for an optimal view of the peloton before the start of a stage.

Also, ŠKODA is present with large-format advertising slogans and communicates the event on many different channels. For the 2019 Tour de France, ŠKODA AUTO will be launching a new marketing campaign that TV, online and social media viewers can follow.

The founding fathers Laurin and Klement laid the foundations for ŠKODA AUTO’s success story in Mladá Boleslav in 1895 with the establishment of a bicycle factory. The Czech car manufacturer’s commitment to cycling, in addition to ice hockey, is, therefore, a cornerstone of ŠKODA’s sponsorship strategy.

ŠKODA’s close relationship with cycling goes far beyond sponsorship activities; ŠKODA runs its own cycling-related website, WeLoveCycling.com, and bicycles and accessories have been part of ŠKODA‘s extended product range for many years.