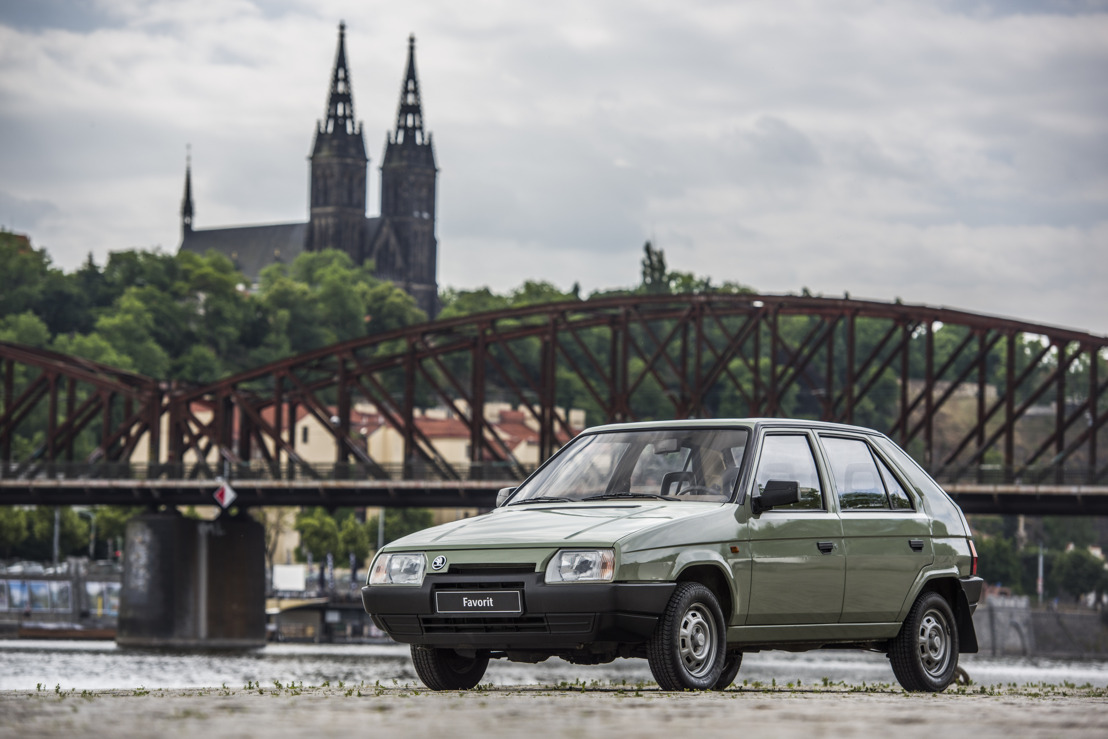 Mladá Boleslav, 15 September 2017 – 30 years ago, ŠKODA entered a new era with the introduction of the modern FAVORIT hatchback. The premiere on 16 September 1987 at the International Engineering Fair in Brno marked a turning point for the traditional Czech company. With its state-of-the-art design, as well as the combination of front engine and front-wheel drive, the ŠKODA FAVORIT was on par with Western competitors in its class. The agile compact model also excelled in rally racing.

"The FAVORIT signalled the start of ŠKODA’s dynamic development, which has continued to this day," says ŠKODA CEO Bernhard Maier. "Although the circumstances were anything but favourable, a team of passionate and enthusiastic engineers created a vehicle that could immediately compete on the western market. The progressive concept of the FAVORIT as well as the developers’ expertise and experience were decisive factors behind the Volkswagen Group’s interest in the ŠKODA brand in Czechoslovakia following the 1989 Velvet Revolution."

The project of a modern passenger car with front engine and front-wheel drive was based on a decision by the Czechoslovak government in December 1982. The implementation deadlines were extremely short: The development stage was to be completed within two and a half years (by June 30, 1985) and production was to start within five years. As the team leader, experienced engineer Petr Hrdlička teamed up with a group of highly qualified and motivated employees who took on the task with great personal commitment. At least, they were not starting from scratch, as the engineers had previously dealt with this concept and developed the front-wheel drive prototype ŠKODA 780.

The design played a major role in the acceptance of the new vehicle. Following the trend of the early 1980s, ŠKODA decided to entrust the design of the new compact car to an Italian designer. The Turin studio ‘Stile Bertone’ was chosen to develop the body versions of the hatchback, estate, notchback and coupe, as well as several interior versions. In addition, the design studio was commissioned to construct a total of 19 prototype models in various designs. A team from ŠKODA’s headquarters in Mladá Boleslav was responsible for implementing the design in series production. The Czech engineers demonstrated a great deal of creativity and expertise in this area as well: Compared to the ŠKODA 120 rear-engine model, they reduced the number of press parts from 405 to just 227. In addition, the 40mm shorter FAVORIT had an interior space that was 85mm longer and a larger boot volume than its predecessor. The ŠKODA FAVORIT became a fully-fledged family car and formed an excellent basis for the subsequent ŠKODA FORMAN estate version.

The ŠKODA team worked closely with the Institute of Motor Vehicles in Prague (ÚVMV), where, for example, simulated test drives were carried out amounting to the equivalent of 100,000 kilometres within a week. Later, the prototypes were put to the test on actual roads, covering over a quarter of

a million kilometres. Road trials were also conducted over the Alps and in the heat of the Italian Riviera. The brakes were tested for effectiveness and stability on the Grossglockner High Alpine Road and the Turracher Höhe in Austria. During the development phase, the ŠKODA engineers cooperated with many external specialists. Experts from Porsche, for example, contributed to the suspension of the engine, the geometry of the front axle and the reduction of the interior noise level. The final phase of the ŠKODA FAVORIT’s development involved dynamic tests on Porsche’s test track in Weissach.

Considerable attention was paid to the "heart" of the new model. This was the proven OHV four-cylinder engine with a capacity of 1,289 cc and a power output of 43 kW (58 hp) or 46 kW (63 hp) – initially with a carburettor; from 1993, with fuel injection. ŠKODA satisfied the high demands of the European clientele in terms of reliability and the new exhaust regulations through the use of particularly durable materials for the valve seats, pistons with steel core, higher quality cylinder liners, stiffer cylinder and crank cases, a hardened crankshaft and many other optimizations.

Acclaimed premiere at the International Engineering Fair in Brno, 1987

The ŠKODA FAVORIT celebrated its official world premiere on September 16, 1987, at the

29th International Engineering Fair in Brno where hundreds of thousands of curious motorists and journalists from all over Europe took a closer look at the new model. Initially, a limited number of vehicles was built at Vrchlabí for homologation. Full production was launched in early December 1987. From August 1988, the FAVORIT series was also produced at the headquarters in Mladá Boleslav. The first FAVORIT 136 L (de Luxe) type vehicles headed to the dealerships in the fourth quarter of 1988 and were available starting at 84,600 Czechoslovakian crowns.

Following the Velvet Revolution in November 1989 and the transition to a market economy, it quickly became apparent that only the entry of a strong foreign partner could ensure ŠKODA’s long-term competitiveness. After intensive negotiations with several interested parties, ŠKODA became a member of the Volkswagen Group in the spring of 1991. The ŠKODA FAVORIT, one of the few passenger cars of modern construction designed in the former Eastern bloc, proved to be an excellent base even after entering Volkswagen. Now, the model received upgrades in technology, appearance and quality. The first facelift rolled out in 1991, with the asymmetrically mounted logo being moved to the centre of the radiator grille. The major revision of January 1993 will be remembered by many drivers for its impressive advertising campaign: ŠKODA attached 548 flags to the FAVORIT– one for each improvement to the compact model.

Thanks to the successive modifications, the FAVORIT series kept pace with customers’ increasing requirements regarding safety, comfort and design. This ensured the model family’s continued success in challenging markets; in Germany, sales between 1990 and 1991 almost doubled. Sales of the ŠKODA FAVORIT and the FORMAN estate version received a further boost with the introduction of special editions, for example, Sport Line, Black Line, Marathon and Excellent. 783,168 ŠKODA FAVORITs were built between August 1987 and September 1994. Alongside the FORMAN estate and commercial vehicle derivatives, including the PICK-UP model, ŠKODA built a total of 1,077,126 vehicles of this model before the ŠKODA FELICIA and the FELICIA COMBI took the baton.

Motorsport: ŠKODA FAVORIT at rallies – success even at the world cup

With the new FAVORIT, ŠKODA entered the rally world championship at the end of 1989, quickly continuing the successes of the Mladá Boleslav rear-wheelers. In 1990, the ŠKODA FAVORIT took part in selected rallies at the World Championship, the European Championship and the Czechoslovakian Rally Championship. Gradually, ŠKODA increased its involvement in motorsport; in 1994, the FAVORIT completed all the World Cup races for the first time. The model achieved its greatest success at the most famous rally in the world – the Monte Carlo Rally. The highly experienced duo Pavel Sibera/Petr Gross won in their class with the FAVORIT 136L four times in a row between 1991 and 1994. In 1994 the traditional brand succeeded in the biggest coup of all: in the category for vehicles with <2.0-litre displacement and a driven axle, the ŠKODA FAVORIT took the title in the FIA World Cup Formula 2.

ŠKODA AUTO is celebrating the anniversary of this model series, which is particularly significant for the company's history, with a special exhibition at the ŠKODA Museum in Mladá Boleslav. From 18 September, various prototypes and documents will be on display. On 26 September at 17.30, a discussion panel, which will include leading figures from the early days of the model, will be speaking about the exciting time of change 30 years ago. They will be sharing their memories and providing a unique insight into the time when ŠKODA wrote the first chapter in its modern-day success story.

The production of the model family at a glance: