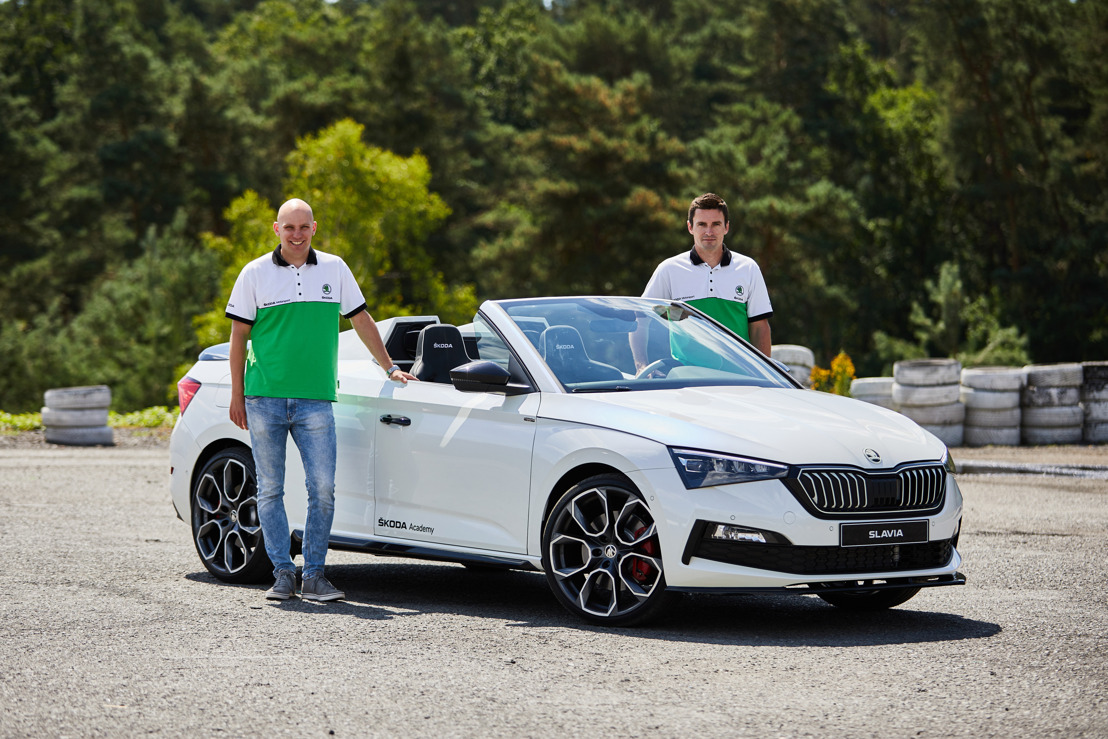 Mladá Boleslav, 30 July 2020 – Following its official presentation, the ŠKODA SLAVIA held up to the scrutiny of Jan Kopecký, the fastest ŠKODA team member. The ŠKODA Motorsport factory driver and 2018 WRC2 World Champion, accompanied by his new co-driver, Jan Hloušek, went to the Bělá pod Bezdězem racetrack to put the seventh ŠKODA Student Car through its paces. The two rally pros also took the sporty ŠKODA 1100 OHC prototype from 1957 for a spin. This was the car that inspired the 31 students from the ŠKODA vocational school to transform a ŠKODA SCALA into the dynamic SLAVIA spider. 125 years on from the founding of the company, the name SLAVIA pays homage to the first bicycles produced by its two founders, Václav Laurin and Václav Klement.

Jan Kopecký, ŠKODA Motorsport’s factory driver, commented, “The apprentices of the ŠKODA vocational school have done a great job again this year, presenting an impressive student car with the ŠKODA SLAVIA. It has breathtaking lines, shows a passion for detail in all areas, while the quality of workmanship is exceptional, given that this car was built entirely by hand. Thanks to its torsionally stiff body, the SLAVIA delivers a very sporty drive and evokes similar emotions to the car that inspired it, the ŠKODA 1100 OHC.

This outing in Bělá pod Bezdězem was special even for the professional race driver, Jan Kopecký. Together with his new co-driver, Jan Hloušek, the ŠKODA Motorsport factory driver tested the new ŠKODA SLAVIA, the seventh ŠKODA Student Car, and was also given the opportunity to drive a few laps in the ŠKODA 1100 OHC. It was this sports car prototype from 1957 that inspired the 31 participants in the Student Car project to transform a ŠKODA SCALA into a sporty spider. It is still fascinating today to experience the kind of sporty potential this prototype from over 60 years ago offered in its time.”

Jan Kopecký has been driving for ŠKODA Motorsport on rally tracks all over the world since 2009. The 38-year-old Czech was the 2013 European Champion, 2014 Asia Pacific Champion and the 2018 season’s World Champion in the WRC2 category. He has also won the Czech national championships for seven times. Since the start of this season, Jan Kopecký has been racing his ŠKODA FABIA Rally2 evo alongside his new co-driver, Jan Hloušek, who was also in the shotgun seat during the test laps with the ŠKODA SLAVIA and the ŠKODA 1100 OHC in Bělá pod Bezdězem.

The ŠKODA 1100 OHC sports prototype served as an important source of inspiration for the 31 students involved in the 2020 Student Car project. The two-seater race car presented in 1957, of which only two open-top examples were ever built, followed by three coupés later on, is a milestone in ŠKODA’s 119-year motorsport history as well as an impressive demonstration of the engineers’ skills at that time. Designed for long-distance races, the vehicle was based on a lightweight tubular frame welded from thin-walled tubes and featured a low, aerodynamically optimised body made of glass fibre reinforced plastic, resulting in an overall weight of just 550 kilograms. Its 1.1-litre fourcylinder engine producing 92 hp enables a top speed of 190 to 200 km/h, depending on the axle ratio – a level of sports car performance that continues to impress people like racing pro Jan Kopecký to this day.

Jan Hloušek, co-driver at ŠKODA Motorsport, emphasises, “For me, this day was like a fast rewind through more than six decades of ŠKODA history. To take a pure-bred ŠKODA race car from 1957 on a track used to fine-tune many of the brand’s successful rally cars was especially exciting for me, as a ŠKODA newcomer. The ŠKODA SLAVIA attests to the high level of education at the ŠKODA Vocational School and demonstrates the impressive knowledge of the apprentices. In this respect, the ŠKODA SLAVIA offers a foretaste of the future work of the experts of tomorrow and therefore the company’s future.”

The Czech brand has been fine-tuning its successful rally cars for around 30 years in the Bohemian forests on the Motorland race, rallycross and test track at Bělá pod Bezdězem. This tradition began with the rally version of the ŠKODA FAVORIT, which won its class four times in the legendary Monte Carlo Rally in the 1990s. ŠKODA Motorsport also tested the ŠKODA FABIA Rally2 in Bělá pod Bezdězem, and the ŠKODA FABIA Rally2 evo was even presented there in 2019.