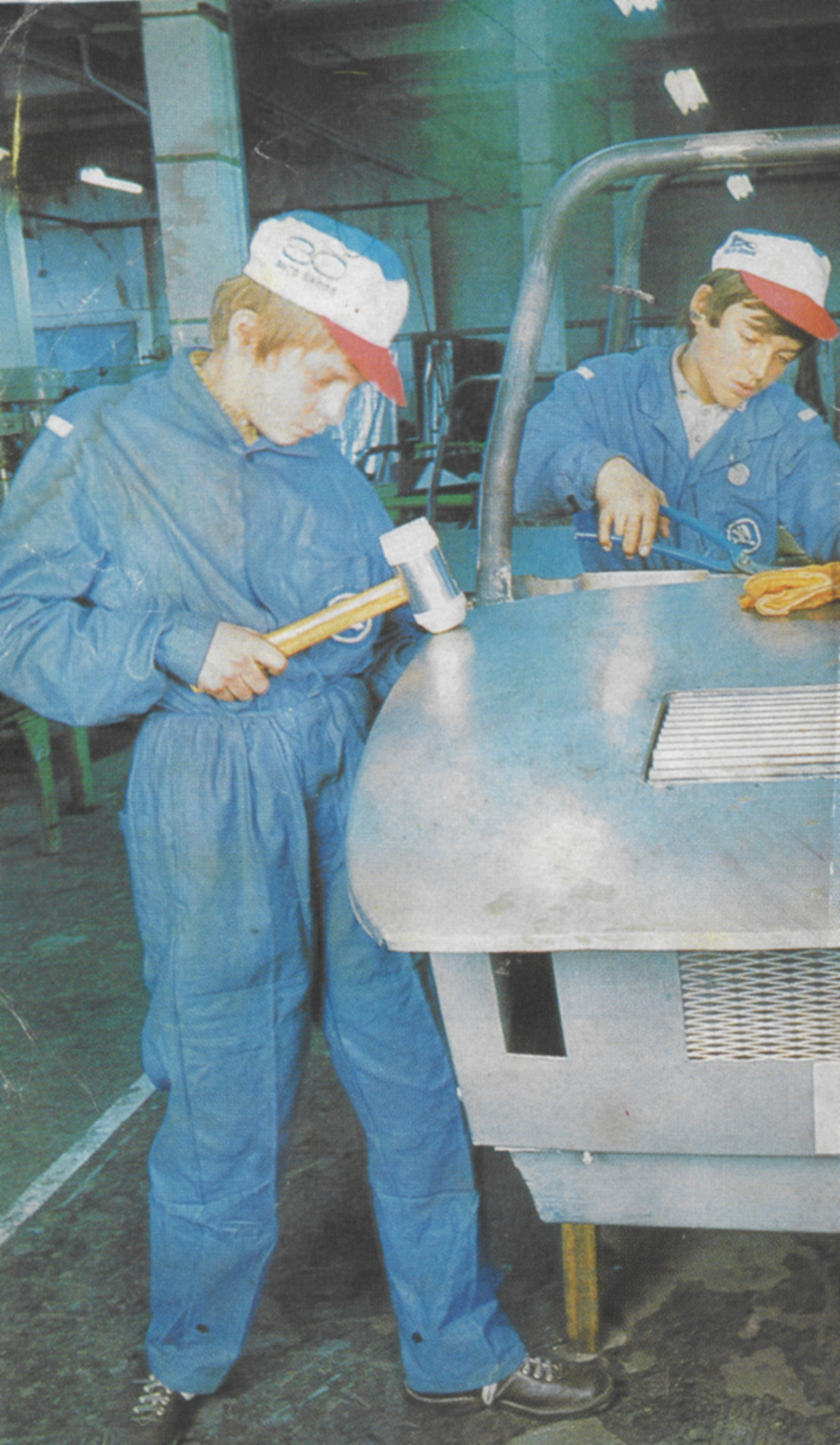 Mladá Boleslav, 17 June 2020 – In a few weeks, trainees from the ŠKODA Vocational School will unveil the seventh ŠKODA student car: a spider variant of the SCALA. A forerunner to the annual project, which began in 2013 and has since become a highlight of each year, can be found in ŠKODA’s company history, back in the 1970s. ŠKODA apprentices manually built four prototypes of the ŠKODA BUGGY type 736 in 1975 – showcasing the high quality of training on offer at the Mladá Boleslav-based school founded in 1927. For more than 90 years, ŠKODA has been placing great importance on the training of the talented young apprentices and its employees, which has been bundled under the umbrella of the ŠKODA Academy since 2013.

Alois Kauer, Head of the ŠKODA Academy since February 2020, stated, “It is extremely important for ŠKODA to provide the talented young apprentices and its employees with comprehensive qualifications from the outset and to offer them appropriate training and development opportunities. The history of our vocational school now dates back more than 90 years. Over the years, we have continuously expanded the range of training courses on offer in various technical and manual professions and added dual programmes for engineers and managers at the ŠKODA Academy. The high level of practical relevance ensures high-quality training, not least due to the close links with production. By taking part in the unique student car project, which had a forerunner back in 1975, our apprentices demonstrate this high standard in an impressive manner once a year. The sense of anticipation about the seventh student car, a spider version of the ŠKODA SCALA, is growing for us all each day.”

Early on in its company history, in the 1920s, ŠKODA was looking for opportunities and ways to prepare its talented young students for their future careers. The ŠKODA Vocational School was founded in Mladá Boleslav in 1927, and quickly gained an excellent reputation. The number of students has been growing over time, as has the selection of technical and manual training programmes on offer. In the 1970s, four-year courses for A-level graduates were added to the range of training opportunities, and the first engineering programmes later followed.

The present-day ŠKODA Academy was founded in 2013. This caters for the training of school graduates and young professionals as well as the development of employees and managers. Following the signing of the memorandum for the promotion of vocational training in 2014, the ŠKODA Vocational School’s classrooms were modernised. The ŠKODA Academy offers dual courses of study and practical training through close links between the academy and ŠKODA AUTO’s Production and Development departments. In this way, the academy is continuing a practice that has been in place for decades: As early as the 1970s and 1980s, many apprentices completed internships at their own companies and visited car factories in other Central and Eastern European countries, such as East Germany. In addition, trainees from the ŠKODA Vocational School took part in national and international trade fairs, exhibitions and competitions.

Shortly after the opening of the ŠKODA Academy, a new tradition began – the student car project, inspired by a forerunner from the 1970s. In 1975, trainees from the ŠKODA Vocational School manually built four prototypes of the ŠKODA BUGGY type 736. One of these is now on display at the ŠKODA Museum in Mladá Boleslav, after having been extensively restored by apprentices from the vocational school in 2017. Once a year, the student car project sees selected young trainees design their own personal dream car and then bring it to life themselves. This enables them to apply and improve the skills they have learned in practice. In doing so, they exchange ideas with experts from all ŠKODA departments and learn about every phase that a vehicle undergoes, from design to development and production. The first ŠKODA student car was unveiled in 2014: the CITIJET was a two-seater variant of the ŠKODA CITIGO. The sixth and latest student car to date is the impressive MOUNTIAQ pickup, which was created based on a ŠKODA KODIAQ in 2019. An overview of all the ŠKODA student cars can be found on ŠKODA Storyboard.

Since autumn 2019, 31 trainees from the ŠKODA Vocational School – including five women – have been working on the seventh student car. For the first time, this is based on the ŠKODA SCALA, which the apprentices are transforming into a stunning spider variant. Alois Kauer is the patron of the project for the first time after becoming Head of the ŠKODA Academy, and he emphasised its importance for the company in an interview. Under the guidance of their teachers and with the support of ŠKODA engineers and experienced staff from the Technical Development, Design and Production departments, the students take on all the production steps themselves – from the drawing of the first drafts to the construction and assembly of the entire unique piece. The halt in manufacturing at all ŠKODA factories and the discontinuation of teaching at the ŠKODA Vocational School during the COVID-19 pandemic also included the student car project and disrupted the already tight schedule. From mid-April onwards, however, the apprentices were able to resume some of their work in the form of theory lessons and video conferences. Practical work recommenced on 1 June, subject to comprehensive hygiene and safety measures – the vehicle is currently in its final phase of development.

ŠKODA AUTO › is this year celebrating 125 years since the company was founded during the pioneering era of the automobile in 1895, making it one of the longest-established car manufacturers in the world.

› currently offers its customers nine passenger-car series: the CITIGO, FABIA, RAPID, SCALA, OCTAVIA and SUPERB as well as the KAMIQ, KAROQ and KODIAQ.

› delivered 1.24 million vehicles to customers around the world in 2019.

› has been part of Volkswagen Group since 1991. Volkswagen Group is one of the most successful vehicle manufacturers in the world. In association with the Group, ŠKODA AUTO independently develops and manufactures vehicles, as well as components such as engines and transmissions.

› operates at three locations in the Czech Republic; manufactures in China, Russia, Slovakia and India mainly through Group partnerships, as well as in Ukraine and Kazakhstan with local partners.

› employs approximately 42,000 people globally and is active in more than 100 markets.

› is pressing ahead with the transformation from a traditional car manufacturer into the ‘Simply Clever  company for the best mobility solutions’ as part of the ŠKODA 2025 Strategy.