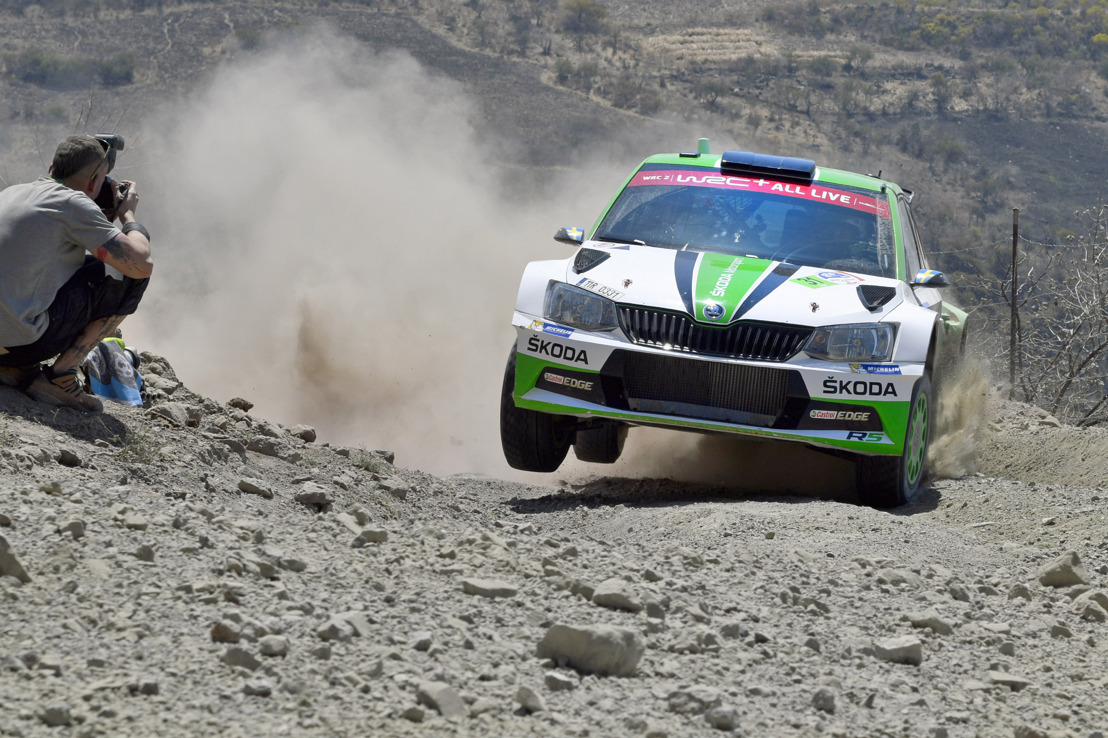 2018 so far is dominated by ŠKODA Motorsport. Jan Kopecký and Pavel Dresler (CZE/CZE)

won the category at Rallye Monte Carlo and Tour de Corse, securing the lead in the WRC 2

(SWE/SWE) were the winners in Mexico and finished second in Sweden, currently trailing

only their teammates in the overall standings. With a repetition of their last year’s win at the

upcoming Rally Argentina (26 – 29 April 2018), they could move into the championship lead

speed on the gravel tracks of the recent Rally Mexico. Norwegians Ole Christian Veiby and

Stig Rune Skjaermoen, another duo of ŠKODA juniors, will contest Rally Argentina without

being registered for WRC 2 championship points.

win in Argentina for the Czech brand in the WRC 2 category. On the other hand, ŠKODA

fourth at the recent Rally France/Tour de Corse. In Argentina he is not registered to score points for

the WRC 2 championship, however.

very well for ŠKODA. After winning in Monte Carlo, Mexico and Corsica we have a double lead in

the WRC 2 championship standings. And the development program for our young drivers runs

the last round of the Czech Championship, Rally Šumava Klatovy. We will see him during the 2018

season on selected events including some of WRC 2.”

A strong pillar of the ŠKODA motorsport program are the activities with customer teams. The

position after getting a recent engine upgrade. “We’re proud, that with no fewer than seven ŠKODA

FABIA R5 in Argentina, we’re the strongest brand in WRC 2 and RC 2 category there. It absolutely

proves that our strategy is working. With the presence of our works team we demonstrate the

In Argentina, around 360 kilometres over 18 special stages – ranging from the Argentine prairie to

altitudes of more than 2,000 metres, sandy tracks across flatlands and rutted mule trails high in the

mountains – are waiting for the crews. Demanding tracks in the foothills of the Andes near Cordoba

are quite similar to those of Rally Mexico. The two ŠKODA FABIA R5, the one that carried Pontus

Tidemand to victory in Mexico and Kalle Rovanperä’s car, were transported directly from Mexico to

Cordoba. To a certain extent, they are already “acclimatised” to the Argentine environment.

The Rally Argentina starts on the evening of Thursday, 26 April, with a spectacular show stage

close to the service park in Villa Carlos Paz. The winner is expected on the podium at the shores of

Did you know that…

... the first Rally Argentina as a round of the World Championship took place in 1980 and was won

... Carlos Reutemann from Argentina not only finished second in the Formula 1 championship of

... Jorge Recalde with his overall victory on home soil in 1988 is the only Argentine so far to win a

round of the World Rally Championship?

and small rutted sandy tracks on more than 2,100 metres altitude like “driving on the moon”?