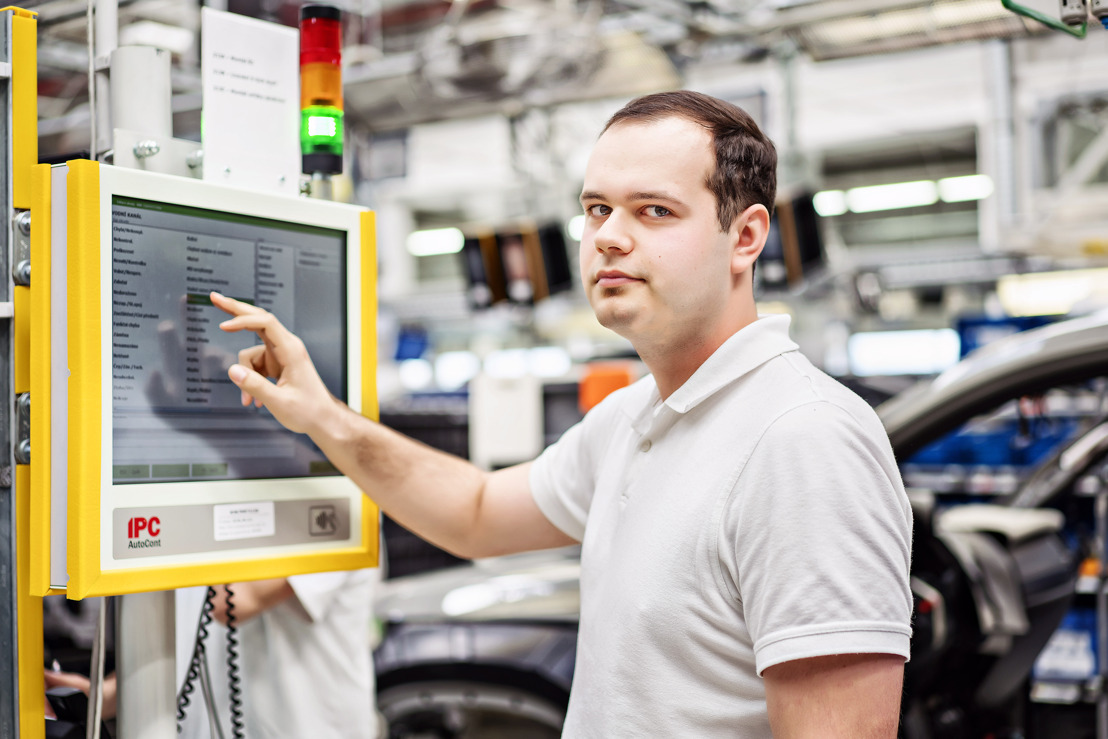 Kvasiny, 18 September 2019 – ŠKODA AUTO is consistently turning to technology from

Industry 4.0 and has successfully introduced the ‘dProduction’ digital notification system at

the Kvasiny factory. Providing multimedia information, it supports the workforce in carrying

out manufacturing steps correctly, notifies them of changes to the production process and

Michael Oeljeklaus, ŠKODA AUTO Board Member for Production and Logistics, said, “As a

cornerstone of our production network, our ultra-modern Kvasiny site plays a key role in achieving

production targets. The gradual digitalisation of production continues to optimise the manufacturing

processes. dProduction makes it easier for our staff to orient themselves within the production steps.

April, investing around 1.2 million euros. ŠKODA builds the SUPERB and KODIAQ models on this line,

as well as – from today – the brand’s first model with a plug-in hybrid powertrain, the SUPERB iV.

instructions are displayed on a screen, which the employees activate using their plant ID cards. The

members of staff then only receive information that is relevant to their current task. Text, 3D models

and video tutorials help them to identify how and where they should correctly install which part. This

saves time and reduces the chance of errors on the assembly line. This subsystem of dProduction,

called VISPART, is set up to work in multiple languages.

The system operates bidirectionally and allows workers to not only read information, but also to input

changes, for example. Each member of staff is granted permissions and assigned to a specific model

automatically upon scanning their ID card.

to confirm completion of each step in the process, which had been used up until now. Thanks to

dProduction, employees now only need to insert their ID card into the card reader – the system then

automatically saves all of the data relating to each manufacturing step.

Quality control on the production line in Kvasiny is also digitally documented. Up until now, staff noted

any subsequent work needed on a form that was attached to the inside of the car. To do this they had

to find and fill out specific boxes on the form in a very short space of time. The new SQS subsystem

makes this process quicker and easier: all the quality controller has to do is select the appropriate

points using the touchscreen and the information is directly transferred into the system.

All of the aspects of dProduction share a common environmental advantage: instructions, manuals,

documentation and quality notes no longer need to be printed out, and any changes to these no longer

result in the need to newly distribute the relevant paperwork. Since the project’s launch in April 2019,

ŠKODA AUTO has thereby already saved dozens of kilogrammes in paper at the Kvasiny site.

use of capacity at the site. Kvasiny is regarded as one of the most up-to-date manufacturing locations

in the entire automotive industry and was thus the first choice for the premiere of dProduction. Added

to that, the production line on which the KODIAQ and SUPERB models are built is one of the shortest

in the industry. It consists of 50 cycles, which include around 5,000 production steps. For the

dProduction project, ŠKODA AUTO installed 50 touchscreens – one per work cycle – as well as

100 standard screens along the assembly line. And that’s not all: 19 km of cable, 200 plug sockets and

2.5 tonnes of electronic hardware were also put in place.

with existing systems, configured 3,500 steps and trained 800 production employees in how to handle

ground in production to future-proof the brand. FORCE is a comprehensive digital toolbox that is

expected to increase efficiency and flexibility, and make vehicle production fit to face the challenges

posed by globalisation. To this end, ŠKODA AUTO has defined eight activity areas – they cover all

aspects of successful vehicle production and have been given clearly stipulated objectives.

Prize-winning project seen as a benchmark within the automotive industry

In July, dProduction was given the prestigious Automotive Lean Production Award in the category of

the automotive industry. The awards’ motto is ‘Learn from the Best’ and they aim to set benchmarks in

the areas of lean industry and the digitalisation of the international automotive industry. Michael

Lean Production conference, which will be hosted by Volkswagen in Wolfsburg on 5 and