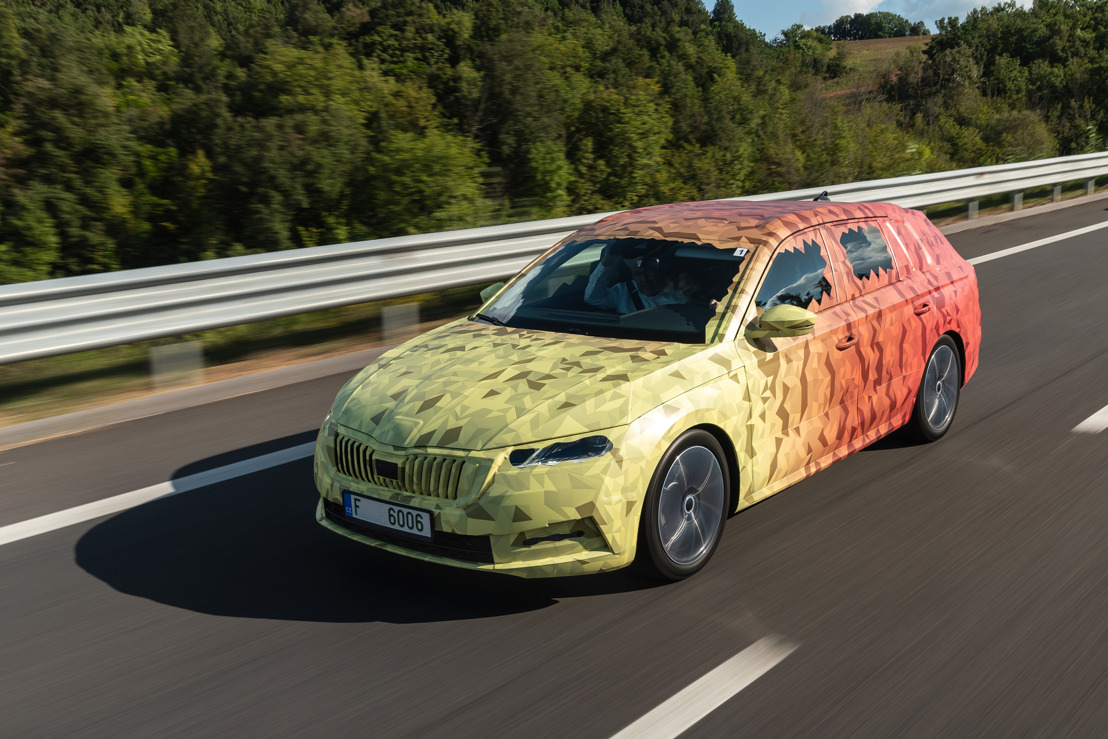 Mladá Boleslav, 29 October 2019 – The OCTAVIA is the heart and engine of the ŠKODA brand,

an icon and the top volume model. And just in time for the 60th anniversary of its start of

production, the Czech manufacturer is introducing the latest edition of its bestseller. The fourth

generation of the ŠKODA OCTAVIA has grown in size, is therefore longer and wider than its

predecessor. And the boot is bigger too. Thanks to the new ŠKODA design language, the

functionality and a unique amount of space with high-quality materials and clever features,

predecessor; its width has grown by 15 mm to 1,829 mm (the hatchback’ length has increased

alloy wheels measuring up to 19 inches lend it a powerful appearance.

New OCTAVIA ranks among the most aerodynamic cars in the world

aerodynamics. The hatchback has a drag coefficient (cd) from 0.24 and the OCTAVIA COMBI from

0.26. The new OCTAVIA thereby ranks among the most aerodynamic cars in the world. The improved

The narrower front headlights and the tail lights use modern LED technology. In the top-of-the-range

version, the OCTAVIA is equipped with a real highlight – full LED Matrix headlights. This innovative

system generates a light beam consisting of several segments which are controlled individually.

Thus, the high beam can be on at all times, without dazzling other road users. Using the camera on

the windscreen, the intelligent technology detects vehicles that are approaching or up ahead as well

as people and objects reflecting the light. The lights also greet the driver with an animated

Coming/Leaving Home function. The full LED tail lights are incorporated into this animation too,

and boast – which is a first for the ŠKODA OCTAVIA – dynamic indicators.

In the new ŠKODA OCTAVIA, the usual impressive amount of space is even more generous. The

rear passengers enjoy an even more luxurious level of kneeroom than before – now 78 mm. The

boot capacity, which is the largest in the segment, has increased to 640 l in the COMBI and 600 l in

the hatchback. The ŠKODA designers have completely revamped the OCTAVIA’s interior. The new

steering wheel now features just two spokes and has a chrome trim; in the multifunction variant,

14 different functions can be performed via push and new scroll buttons in a chrome finish.

The centre console, door trims and dashboard have been redesigned too. Featuring a modular, multilevel

arrangement, the dashboard echoes the shape of the ŠKODA grille with a contrasting, coloured

seats are available for the first time. In addition to being heated, these also come with the options of

a massage function and/or cooling ventilation. The optional sports seats are covered in a particularly

breathable ThermoFlux fabric. Another optional feature in the new OCTAVIA is the tri-zone Climatronic

air conditioning. When equipped with the KESSY keyless entry system, any one of the OCTAVIA’s

four doors can be opened first.

At the time of the market launch, the new OCTAVIA will be available in the Active, Ambition and Style

trim levels. Later in 2020, the rugged OCTAVIA SCOUT and the sporty OCTAVIA RS will be added to

The OCTAVIA is the first ŠKODA model to feature a head-up display. This projects important

view of the driver, allowing them to read it without taking their eyes off the road. The new ŠKODA

underline the brand’s innovative capability in the compact car segment. All of these qualities

are topped off with extraordinary value for money and the usual high level of ŠKODA quality.

That’s why we’ve totally renewed this car. The outcome is the best OCTAVIA of all time: it is even

more spacious, more practical and safer than ever. Just in time for its 60th anniversary, we are taking

a big step into the future with the new generation. Over the last six decades, the OCTAVIA has

contributed to the positive development of the company and the brand. I am very confident that

the new generation will play its part in maintaining this positive development.”

In January 2019, the OCTAVIA celebrated 60 years since its start of production. The first units

beginning of 1959. In the mid-1990s, the first OCTAVIAs of the modern-day generation inherited

the legacy from the popular compact car. The Czech car manufacturer has built more than 6.5 million

OCTAVIAs since its launch in 1959. Over the past few years, the third generation of the large compact

car has sold about 400,000 units a year worldwide, acccounting for about one third of ŠKODA’s total

sales. Currently, the OCTAVIA is the overall bestselling model in the Czech Republic, Austria,

Switzerland, Finland, Hungary, Poland, Serbia and Belarus. The leading role in this success story is

played by the COMBI variant: nearly two thirds of all OCTAVIA buyers opt for this body design. The

OCTAVIA is the bestselling estate in Europe and the most popular import car in Germany. Therefore,

ŠKODA AUTO will first launch the COMBI variant of the bestseller’s latest edition; the hatchback will

The new front apron and the sharply drawn, new headlights provide visual highlights for the

ŠKODA OCTAVIA. The compact vehicle’s increased length and width bring out its self-assured

character. At 4,689 mm, the fourth-generation ŠKODA OCTAVIA COMBI is 22 mm longer than its

front out of the up to five USB-C ports; a 230-V socket in the rear is optional too. The acoustically

ŠKODA has further improved the Virtual Cockpit for the new OCTAVIA. The latest generation of the

and the central display measuring up to 10 inches in two different levels of zoom. Climatronic can be

operated via an integrated bar at the bottom of the infotainment display. Via a new touch slider at the

bottom of the infotainment system’s display, the volume can be adjusted using one finger and the

navigation map can be zoomed in and out using two fingers.

transmission. The gear selector is no longer connected to the gearbox mechanically. Instead, it relays

which gear has been chosen electronically. In place of the familiar DSG lever, there is therefore a new

drive modes – R (reverse), N (neutral) and D/S (drive/sport) – as well as a button for the parking

systems, some of which are making their debut in a model made by the Czech manufacturer. The new

of an impending collision with a pedestrian, cyclist or another vehicle – ideally preventing the accident

with a controlled evasive manoeuvre. The Exit Warning system lets the driver know if another vehicle

or a cyclist is approaching from behind when opening the car door. Using Hands-on Detect, the car is

have control of the vehicle due to a potential medical emergency. If such an emergency occurs,

Emergency Assist can bring the car to a stop.

of our cars and their passengers, as well as other road users, is top priority at ŠKODA. With the new

safety and assistance systems of the fourth OCTAVIA generation, such as Collision Avoidance Assist

and the Exit Warning system, we have raised the OCTAVIA to a new level and made it one of the

safest cars within its segment.”

Modern engines with increased efficiency and premiere for mild-hybrid technology

thanks to significantly improved aerodynamics, lower fuel consumption and pollutant emissions. In

addition to the diesel and petrol engines, there is also a particularly eco-friendly variant with CNG

and a 48-V lithium-ion battery. This makes it possible to ‘coast’ with the combustion engine completely

switched off, recover energy whilst braking and support the engine with an electronic boost. At the

same time, the engine is able to start more quietly and with fewer vibrations. Both engines are also

available in combination with a 6-speed manual gearbox without mild-hybrid technology. The gearbox

that comes with the 1.5 TSI was newly developed for engines that deliver high levels of torque and is

being used in conjunction with the OCTAVIA’s diesel engines too. The 2.0 TSI with a power output of

140 kW (190 PS) is exclusively available with all-wheel drive and a 7-speed DSG. All of the TSIs are

fitted with a petrol particulate filter.

Following on from the first ŠKODA plug-in hybrid, the ŠKODA SUPERB iV, the Czech brand is also

offering the new OCTAVIA with a 1.4 TSI petrol engine – the OCTAVIA iV features an electric motor

too – and even comes with two different power variants. As well as the model with a power output of

Both variants will come with a 6-speed DSG.

For the OCTAVIA, a total of three new diesel engines provide power outputs ranging from 85 KW

developed EVO generation of engines, which have plenty of torque, and are both efficient and

particularly clean. In addition to a diesel particulate filter, the engines are equipped with a new

is specifically injected in front of two SCR catalytic converters that are arranged one after the other.

by around 80 per cent in comparison to the previous generation of each engine. As a result, the EVO

CNG drive. Compared to a car running on petrol, the OCTAVIA G-TEC will thereby once

three CNG tanks is 17.7 kg. If required, the car can make use of its 9-litre petrol tank too. Both body

Besides the standard chassis, ŠKODA is offering two other options for the OCTAVIA, a 15-mm-lower

Chassis Control – which constantly adjusts the suspension and damping, provides a range of different

profiles for Driving Mode Select – is available as an option. When fitted with DCC, the ground

clearance remains unchanged in plug-in hybrids, all other variants are lowered by 10 mm.

easier for the driver and passengers. The Sleep package is available as an option for the first time

in the OCTAVIA, giving the back seat two comfortable, larger headrests and a blanket. For the estate,

are also new. A multifunction storage pocket below the boot cover offers further space for stowing

items. Child safety locks for the rear doors can be operated electronically and the rear passengers

can make use of two smartphone storage pockets on the front seatbacks. Two USB-C sockets are

available in the front and, as an option, two in the rear; another optional USB-C port on the overhead

console above the rear-view mirror is brand new. One classic ŠKODA feature is the umbrella in

a storage compartment in the driver’s door; there is now space in this compartment for a hand brush

as well, which is also a genuine ŠKODA accessory. The funnel integrated into the lid of the

windscreen washer tank is present in the OCTAVIA too, whilst the optional tow bar can be electrically

unlocked by pushing the corresponding button in the boot. The car also comes with a new, convenient

filler tube for AdBlue, enabling it to be filled up using lorry pump nozzles too.