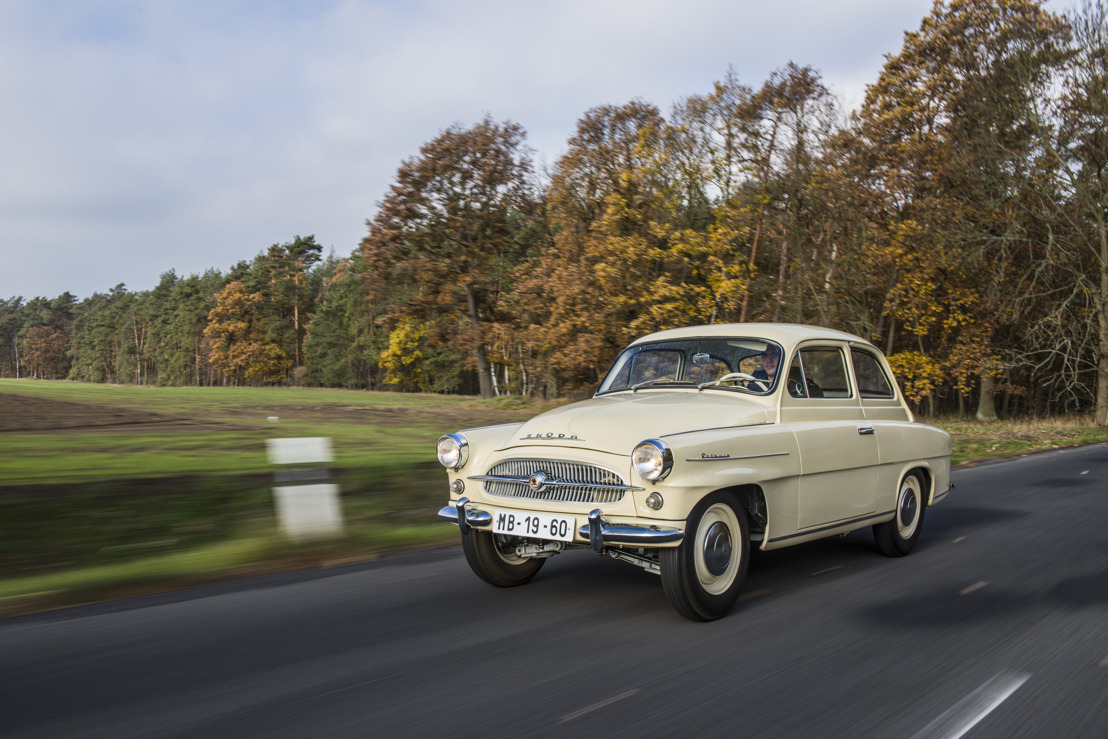 Mladá Boleslav, 30 January 2019 – The ŠKODA OCTAVIA is celebrating 60 years since

production was launched: In January 1959, the first copies of this legendary model series

rolled off the production line at the Mladá Boleslav plant. The first OCTAVIA generation of

the modern era continued the legacy of the popular compact model in the mid-1990s.

The sonorous name ‘OCTAVIA’ first enriched ŠODA's model range exactly 60 years ago. It is no

coincidence its name is derived from the Latin ‘octavia’. It means ‘the eighth’, as the newcomer was

state-of-the-art independent suspension the manufacturer had introduced in 1933.

OCTAVIA, a robust four-cylinder engine with a capacity of 1.1 litres was used, generating 29.4 kW

average consumption was 7.7 litres of petrol per 100 kilometres. The attractive, flowing body design

was just as impressive as its driving characteristics. Technical innovations, including the front axle

with coil springs and torsion bar stabilizer, gave the OCTAVIA a high degree of ride comfort and

easy handling. The introduction of asymmetric headlamps during 1959 increased its active safety.

ŠKODA also presented a more powerful variant in 1959 with the OCTAVIA SUPER, featuring a 1.2-

litre engine and a peak output of 33 kW (45 hp). Demand for the OCTAVIA model range rose

sharply at home and abroad.

On 10 March 1960, the Geneva Motor Show saw the premiere of the sporty ŠKODA OCTAVIA

Touring Sport (TS), which boasted an engine output of 37 kW (50 hp). ŠKODA applied to the World

On 11 September 1960, ŠKODA presented the OCTAVIA COMBI in Brno for the first time with a

comfortably sat five and provided 690 litres of boot space with a loading length of 0.965 meters.

After folding down the rear backrests, the luggage compartment increased to up to 1050 litres.

The two-door saloon was built until 1964; the last copy – a grey OCTAVIA Super – rolled off the

Mladá Boleslav production line on 11 April. The all-new ŠKODA 1000/1100 MB with a selfsupporting

body and rear engine would soon step up as its direct successor. The last OCTAVIA

produced in New Zealand in 1966: the TREKKA was developed in close cooperation with the

Czech automobile manufacturer and built on a shortened chassis of the OCTAVIA SUPER. The

popular utility vehicle is considered to be one of the forerunners of ŠKODA’s current SUV models.

With the debut of the first modern OCTAVIA, the name of the model had become synonymous with

the entire brand. In 1992 – shortly after ŠKODA joined forces with the Volkswagen Group – work

started on developing a completely new model based on the legendary type designation. On a

with an unmistakable design. The OCTAVIA saloon with a large tailgate debuted on 4 April 1996

and immediately gained international acclaim with a high level of active and passive safety. It also

benefitted from a boot volume of 528 to 1328 litres. The OCTAVIA COMBI, which was even more

spacious and especially successful on the European markets, was added to the range in March

470,000 estates of the first generation OCTAVIA had been built by November 2010.

This success was topped by the second generation ŠKODA OCTAVIA, which was built between

utility value, this generation boasted many technical innovations, including petrol engines with direct

backbone of ŠKODA’s model range. It has been in production since November 2012 and was fully

updated in February 2017. More than 2.5 million customers have already opted for this generation.

The ŠKODA OCTAVIA has long been firmly established in many markets. This is impressively

demonstrated by the fact that almost 6.5 million OCTAVIAs have been produced since 1959. In

addition to the main ŠKODA plant in Mladá Boleslav, the OCTAVIA also runs off production lines in