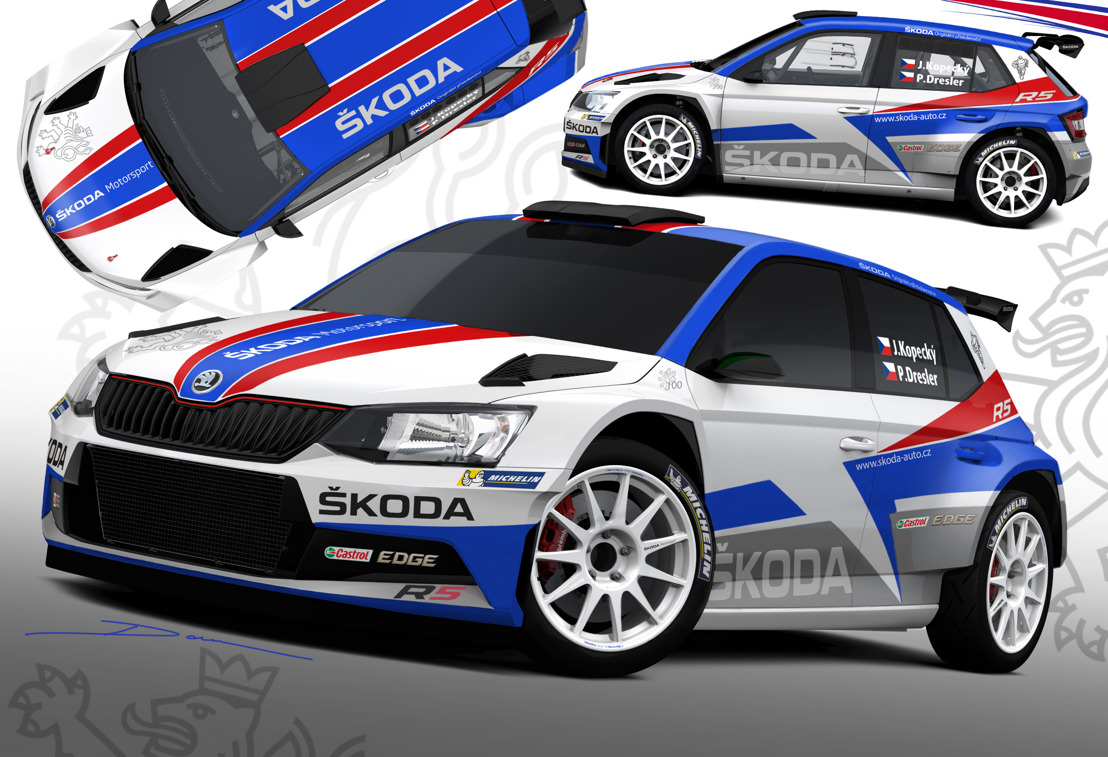 Mladá Boleslav, 18 January 2018 – ŠKODA Motorsport will compete at the upcoming Rally Monte Carlo (25/01/–28/01/2018) with three ŠKODA FABIA R5 crews. Czech Champions Jan Kopecký/Pavel Dresler (CZE/CZE) fight for the victory in WRC 2 category. Their car is carrying the tricolour of the Czech flag, paying tribute to the 100th birthday of the founding date of Czechoslovakia. Ole Christian Veiby/Stig Rune Skjaermoen (NOR/NOR) and Kalle Rovanperä/Jonne Halttunen (FIN/FIN) are this time not nominated to score championship points for WRC 2 classification. In order to get more experience on one of the most challenging World Championship rallies, they are competing in the RC2 class.

"Rally Monte Carlo 2017 for me was a very special moment in my career. Andreas Mikkelsen and Jan Kopecký not only secured a double win in WRC 2 category. They also achieved seventh and eighth position overall amongst much more powerful WRC cars. I am really looking forward to see whether Jan can repeat his fantastic result from last year", explains ŠKODA Motorsport boss Michal Hrabánek.

Paying tribute to the founding date of Czechoslovakia back in 1918, the ŠKODA FABIA R5 of Jan Kopecký will carry the tricolour of the Czech flag. "I feel honoured that I can represent my home country at Rally Monte Carlo already with this very special design. I´m dying to start the season", admits the reigning Czech Champion. According to Kopecký, due to the changing weather conditions with dry and wet tarmac, icy patches and snow the tyre choice is key to success. The 35-year old veteran is competing for the seventh time at Rally Monte Carlo. In contrast, 17 years old ŠKODA junior Kalle Rovanperä is a newcomer to the WRC’s most prestigious event and is the youngest driver on the enty list. His teammate, the 21 years old O.C. Veiby, makes his third attempt at Rally Monte Carlo, albeit for the first time in a four-wheel driven car.

"Each driver can nominate only seven out of 13 World Championship rounds for his points score. That means six rallies do not have an impact on the final standings. This is what we take advantage of at Rally Monte Carlo. Without any pressure our youngsters Kalle and O.C. can gain experience under the most difficult conditions", explains ŠKODA Motorsport boss Michal Hrabánek.

The start into the new season is a very busy one for ŠKODA Motorsport: While the Rally Monte Carlo is running the brand’s motorsport department is moving into new facilities close to ŠKODA’s Mladá Boleslav factory.

In total, 17 stages will be waiting for the competitors, covering a distance of approximately 395 kilometres. The first leg of the Rally Monte Carlo will start on Thursday (25 January) at 18h00 in front of the principality’s famous Casino. Two demanding stages in the dark will follow, before the teams will arrive around midnight for the rest halt in Gap in the French Alps. On Friday and Saturday, the crews are facing eleven more stages, before on Saturday evening the rally returns to the service park set up in the harbour of Monte Carlo. Sunday (28 January) features four more stages, among them two runs over the famous Col de Turini.

...that Rally Monte Carlo, first run in 1911, is the oldest event of today’s WRC calendar?

…that in 2018 the famous 37 kilometres long "Sisteron" stage is run in reverse direction in the dark as the first test on the opening Thursday?

…that the tyre choice is extremely difficult and crucial at Rally Monte Carlo? The teams have to tackle between two and three stages with the four tyres mounted on the car plus maximum two spare wheels. Therefore tyre decision is mostly a compromise

…that therefore crews often fit their car for example with a mixture of studded winter tyres and slick tyres in all kind of combinations in order to somehow meet the changing road conditions?

…that on Sunday the price-giving ceremony will be held in front of the Palace in Monaco with His Highness Prince Albert presenting the awards?