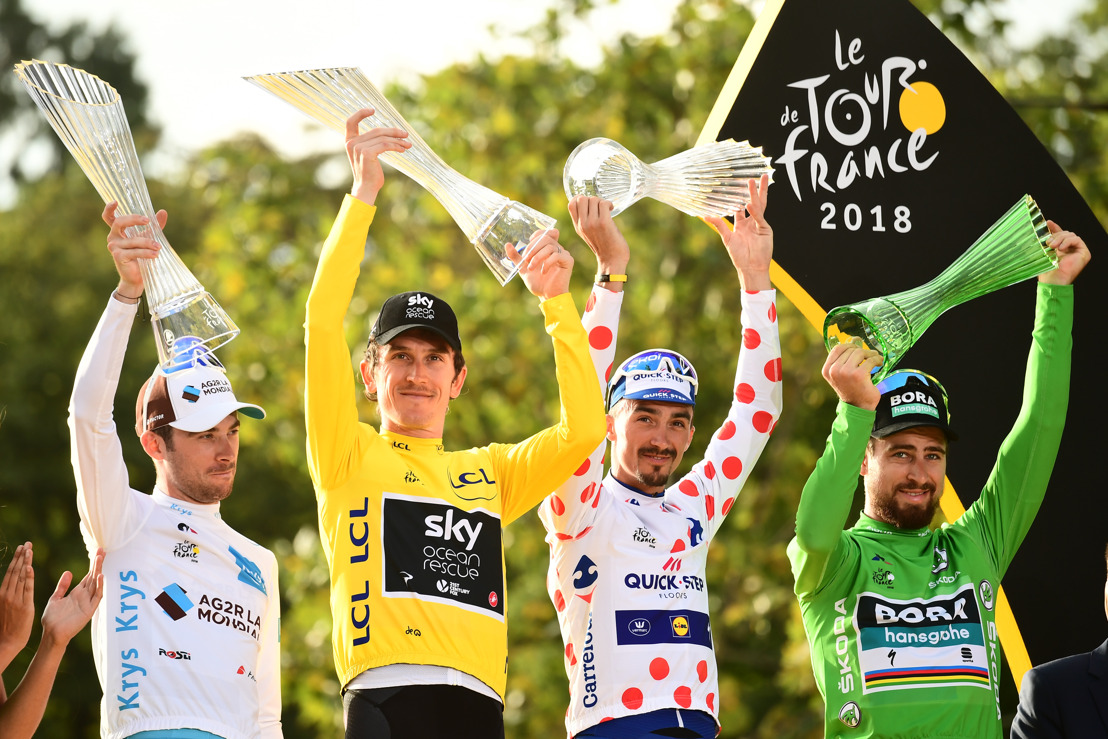 on Sunday with 3,351 km under his belt and the trophy designed by ŠKODA Design in his

hands. On the Champs-Élysées, the Welshman lifted the sculpture made from Czech crystal

glass into the Parisian sky. Alain Favey, ŠKODA AUTO Board Member for Sales and

Marketing, presented the award for most points to Peter Sagan. This green crystal glass

15th time and provided a total of 250 support and escort vehicles, including the ŠKODA SUPERB as

island of Noirmoutier. During the three-week-long cycling tour, the 176 professional cyclists

conquered 21 stages, including numerous challenging mountain passes. Over the course of the

Tour, Geraint Thomas quickly established himself as a hot contender for the overall win. The

Welshman seized the yellow jersey during the 11th stage and wore it with poise all the way to Paris.

points classification winner for a fourth year. The title of best sprinter was taken by Slovakian Peter

Sagan, who won the prestigious award for the sixth year in a row. Just like the trophy for the overall

winner, the trophy awarded to the winner of the points classification is also ‘designed by ŠKODA

Design’ and ‘made in the Czech Republic’. The car manufacturer from Mladá Boleslav has been

designing the trophies for the winners of the world-famous cycling race since 2011. The 60-cm-tall

masterpieces of Czech glass art weighing 4 kg are manufactured by the company Lasvit. The

elegant silhouette of the trophies has long been a trademark of the Tour de France; whilst their

when it comes to the design of the surfaces. This year the trophy pays homage to the geometric

escort vehicles for the peloton this year. In addition to the ŠKODA OCTAVIA, the fleet also included

the two SUVs, the ŠKODA KODIAQ and ŠKODA KAROQ, as well as the ŠKODA SUPERB. The

brand’s flagship resumed its role at the front as the most important car in the entire Tour: the Tour

constantly kept up to date and issues race- or safety-related instructions via several radio channels.

Thanks to the car’s large panoramic glass roof, which opens at the push of a button, Prudhomme

could stand in the rear and oversee the peloton from an optimal position.

ŠKODA campaign ‘Always there for those who ride’

event in the cycling world with the motto ‘Always there for those who ride’. The car manufacturer

positioned it pride of place on their website WeLoveCycling.com and on several social media

cycling fans can find out all about the largest cycling event in the world.

Links to cycling from the outset

ŠKODA’s passion for cycling dates back to the beginnings of the company’s history. In 1895,

Boleslav. Just ten years later, the ‘Voiturette A’ was the first motor car to roll out of the young

company’s workshop. In 1925, Laurin & Klement merged with ŠKODA. Besides the Tour de France

cycling races, as well as numerous national and international grass-roots events. In addition,

bicycle accessories are a key component in the brand’s expanded product range.