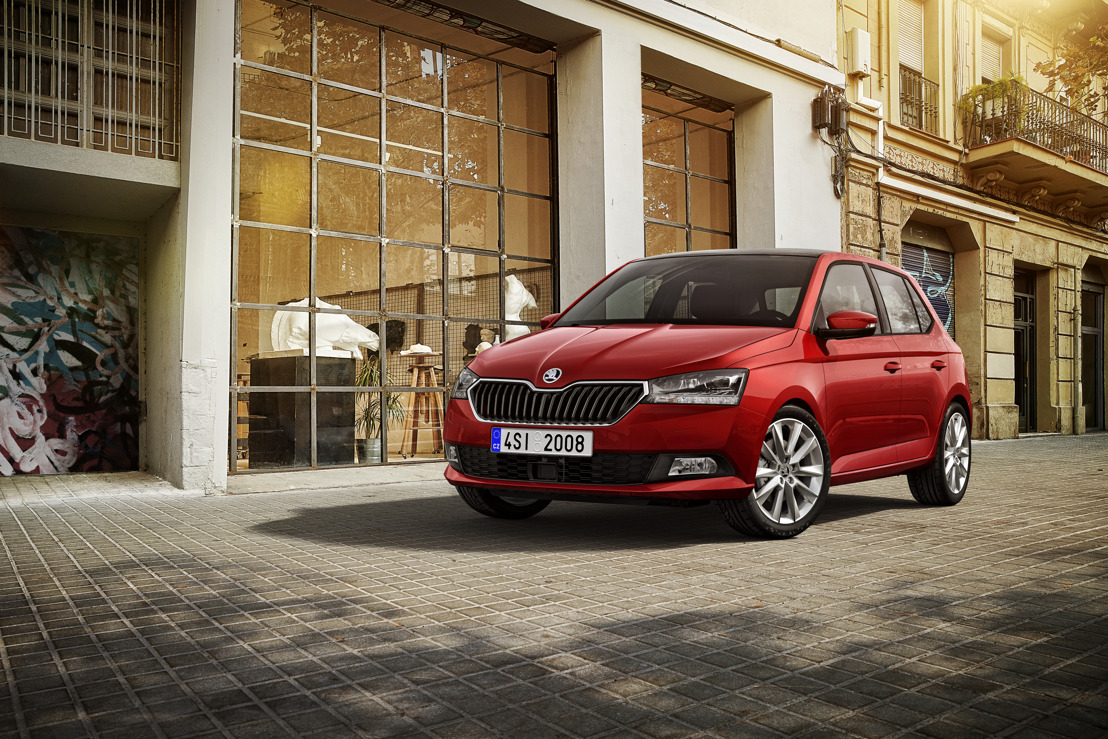 Mladá Boleslav, 8 February 2018 – The ŠKODA FABIA is embarking on the next chapter of its success story with wide-ranging enhancements in terms of both design and technology. The popular small car made by the Czech carmaker will now boast even greater appeal thanks to restyled front and rear sections, the introduction of LED head and rear lights, as well as a refined interior. Lively and efficient 1.0 gasoline engines, as well as additional assistance systems underline the sophisticated character of the ŠKODA FABIA. The revised model is being unveiled at the International Motor Show 2018 in Geneva. The market launch is in the second half of 2018.

New design highlights inside and out

Front and rear design updates produce a remarkably high-class appearance, while headlights and front fog lights with new outlines and state-of-the-art lighting technology also freshen up the look of the car. LED headlights and LED rear lights are now being offered for the ŠKODA FABIA for the first time. The choice of alloy wheels has been extended too, including the addition of 18-inch wheels for the hatchback. The redesigned instrument cluster, new trim strips for the dashboard and two-tone finishes for the seats help to give the interior a more noble feel.

The line-up of engines for the ŠKODA FABIA will consist of four petrol drivetrains, each with three cylinders and a capacity of 1.0 litre, whose performance is as eager as it is efficient. The MPI engines feature indirect injection and produce outputs of 44 kW (60 hp) and 55 kW (75 hp) respectively. The two TSI drivetrains are both packed with advanced engineering, including turbocharging and direct petrol injection, enabling them to generate 70 kW (95 hp) and 81 kW (110 hp). Both TSI engines are fitted with gasoline particulate filter. The most powerful of the quartet of engines can be matched with a seven-speed DSG gearbox as an option.

By concentrating on sophisticated petrol engines for its drivetrain portfolio, ŠKODA is paying careful consideration to the requirements of the target groups in the small car segment. Boasting further improved economy and exceptional emissions performance, the state-of-the-art three-cylinder power units are on a par with frugal diesel engines for fuel efficiency.

By expanding the choice of driver assistance systems, ŠKODA AUTO has once again transferred advanced technology from higher vehicle classes to the small car segment. The new Blind Spot Detection feature alerts the driver to the presence of vehicles in the blind spot or approaching rapidly from behind when driving on multi-lane highways. The Rear Traffic Alert system monitors what is going on behind the vehicle and warns of a risk of collision when reversing. Another newly

available feature is Light Assist, which automatically switches to low beam as soon as the system detects oncoming traffic or vehicles ahead.

The infotainment system ‘Swing’ now offers a 6.5-inch display and also allows drivers to use the full range of mobile online services from ŠKODA Connect. When equipped with the ’Amundsen ’ navigation system, the ŠKODA FABIA will also now offer the Online Traffic Information service with real-time information on traffic holdups. Meanwhile, innovative SmartLink+ technology makes it possible to enjoy all the benefits of the Apple CarPlay, Android Auto, MirrorLinkTM and SmartGate standards.

The brand’s signature characteristics that set the ŠKODA FABIA apart in the small car segment include a wealth of practical touches designed to increase comfort and functionality in day-to-day use. An even greater number of these ’Simply Clever‘ features is now available. The ice scraper concealed in the fuel filler flap now incorporates, as a new function, a gauge for measuring the tyre tread depth. The car can also be equipped with USB ports for the rear-seat passengers for added comfort. Customers can also opt for a double-sided boot mat. The side compartment in the boot of the ŠKODA FABIA COMBI also features a portable LED flashlight.

Important part of the ŠKODA model portfolio The ŠKODA FABIA plays a key role in the Czech carmaker’s current model range. Its trademark brand qualities have turned it into an international bestseller in the small car segment, while it has also provided the basis for ŠKODA’s most recent successes in the world of rallying. Since 1999, over four million units of the ŠKODA FABIA have been sold worldwide, with the current third model generation alone accumulating sales in excess of the 500,000 mark. As a result, the ŠKODA FABIA is presently ranked third in the brand’s list of best-selling model series. The main markets for the hatchback model are Germany, UK and Poland, whereas the ŠKODA FABIA COMBI is particularly popular in Germany, the Czech Republic and Poland.

On ŠKODA Storyboard you will find an article on this topic as well as an interview with Jiří Hadaščok, coordinator of exterior design at ŠKODA AUTO.