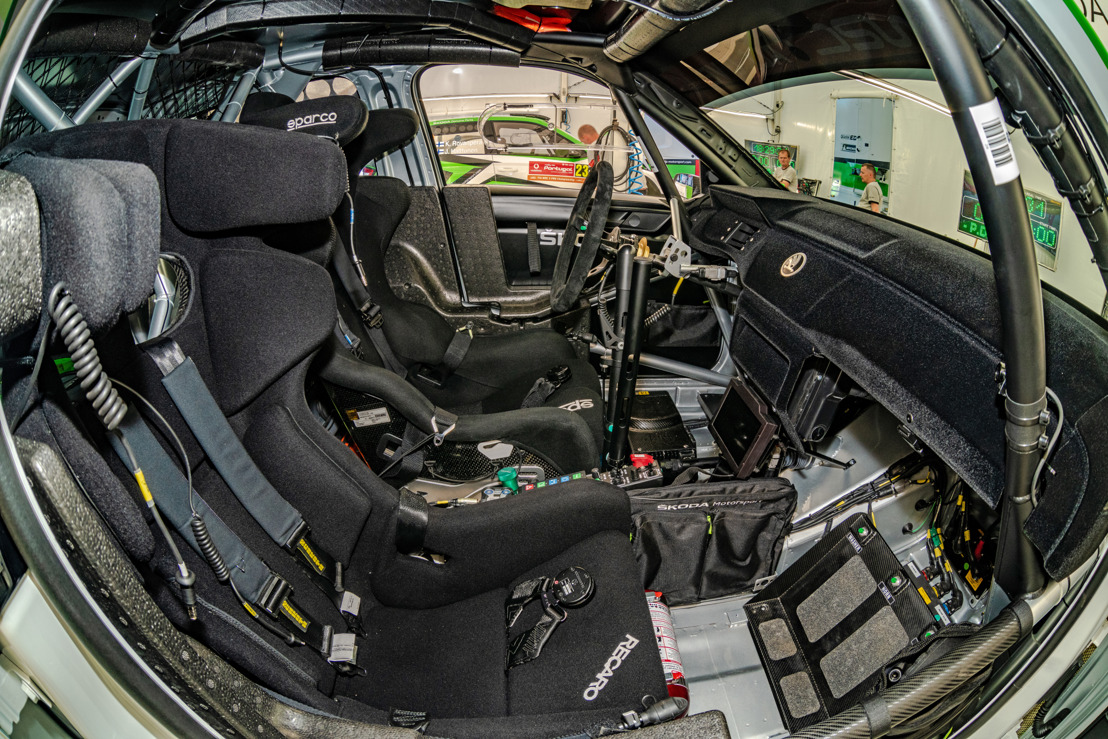 Mladá Boleslav, 18 June 2020 – Motorsport can be dangerous. But the safety equipment of modern rally cars like the ŠKODA FABIA Rally2 evo gives crews better chances than ever to walk away from even the most frightening off-road excursions. Additional feature with more background information and a graphic at ŠKODA Storyboard.

Half a dozen airbags and numerous Advanced Driver Assistance Systems (ADAS), today common in every road car from ŠKODA, are not an option for the Czech brand’s most sporty model – the ŠKODA FABIA Rally2 evo. Electronically triggered systems simply would be too sensible for the enormous g-forces on ultra-fast tarmac stages, around thirty metres long jumps and the tyreshredding gravel roads of the FIA World Rally Championship (WRC). Instead, ŠKODA’s contender for rallying’s top series and countless lower championships has to rely on pure mechanical engineering when it comes to occupant safety. Cue in extra-stiff steel tubes, six-point harnesses, racing seats with head wrap around plus side protection made from carbon fibre and shockabsorbing foam.

The safety equipment of an internationally eligible rally car has to comply to stringent regulations, set up by the sport’s governing body FIA. That’s why each ŠKODA FABIA Rally2 evo is built by the factory team ŠKODA Motorsport in Mladá Boleslav only. “It’s our responsibility to guarantee optimum quality not only for performance related parts but also for every component to protect the crew,” emphasises Michal Hrabánek, director of ŠKODA Motorsport.

When things go really wrong, let’s say with a multiple roll through a Finnish forest, a rally car’s safety equipment’s most important task is to keep the cockpit in shape as good as possible. That’s primarily the job of the welded-in roll cage. In case of the ŠKODA FABIA Rally2 evo, roughly 34 metres of steel tubes crisscross what would be called “passenger room” in a road car. The strongest tube has a diameter of 50 millimetres, most of the others are between 40 and 35 mm thick. The side windows are made of polycarbonate, which has a minimum thickness of 3.8 mm and has, according to the technical regulations, to be easily removable without tools. The longitudinal, lateral and diagonal bars in the door openings, under the roof, around the windscreen and behind the seats are made from seamless, cold-drawn, un-alloyed carbon steel, which during car build-up requires welders with special certification.

The roll cage’s computer-aided design not only secures survival space for driver and co-driver, even when the bodywork is badly deformed. It’s also an integral part of the car’s chassis and significantly increases the car’s torsion stiffness as well as making it very sensible to smallest setup changes.

Like for passengers of a road car, the biggest danger for a rally crew comes from lateral impact. While in a ŠKODA FABIA series model a combination of B-pillar, door reinforcement and airbags as a protection is used, its racing brother features a roll cage with two door bars as a main protection against a side crash. On top of that, the rally car has an energy absorbing structure which consists of absorbing foam and composite door panels located between door outer skin and crew.

Interaction between seat and harness

A road car with the chassis stiffness of a rally car would master any standard crash test with very little deformation to the body – but the forces applied to the occupants would be way too high. But rally crews are not only super-fit and can handle much bigger g-forces than the average driver. Also, their personal equipment as well as racing seats and six-point safety belts offer protection way superior to their road car equivalents.

Professional drivers mostly use tailor-made, tight fit bucket seats, which limit the movement of the body under lateral acceleration to a minimum. The mandatory six-point safety belt keeps the body fixed to the seat and rules out the dangerous effect of submarining. The head wrap around – often called “ears” – stops the head from moving around dangerously for example during rolls. Additionally, the use of a head and neck support system is mandatory. The system links the helmet to the body by either straps around the chest or by a neck support. In conjunction with the six-point safety belt, the system limits the longitudinal movement of the head, saving the crew from severe neck injuries in case of a head-on collision or rear impact.

To give fire as little chance as possible during an accident, each ŠKODA FABIA Rally2 evo is equipped with a built-in fire-fighting systems in addition to hand-held extinguishers. Nozzles are directed towards the crew and cover the engine bay with foam if necessary. This system can be activated from outside the car, for example by a marshal. Just to make sure, ŠKODA Motorsport uses remote switches with an elevated frame. It wouldn’t be the first time in WRC history, such a system is activated accidentally by somebody enthusiastically clapping on the bonnet. Additional feature with more background information and a graphic at ŠKODA Storyboard.

The calendar of the 2020 FIA World Rally Championship