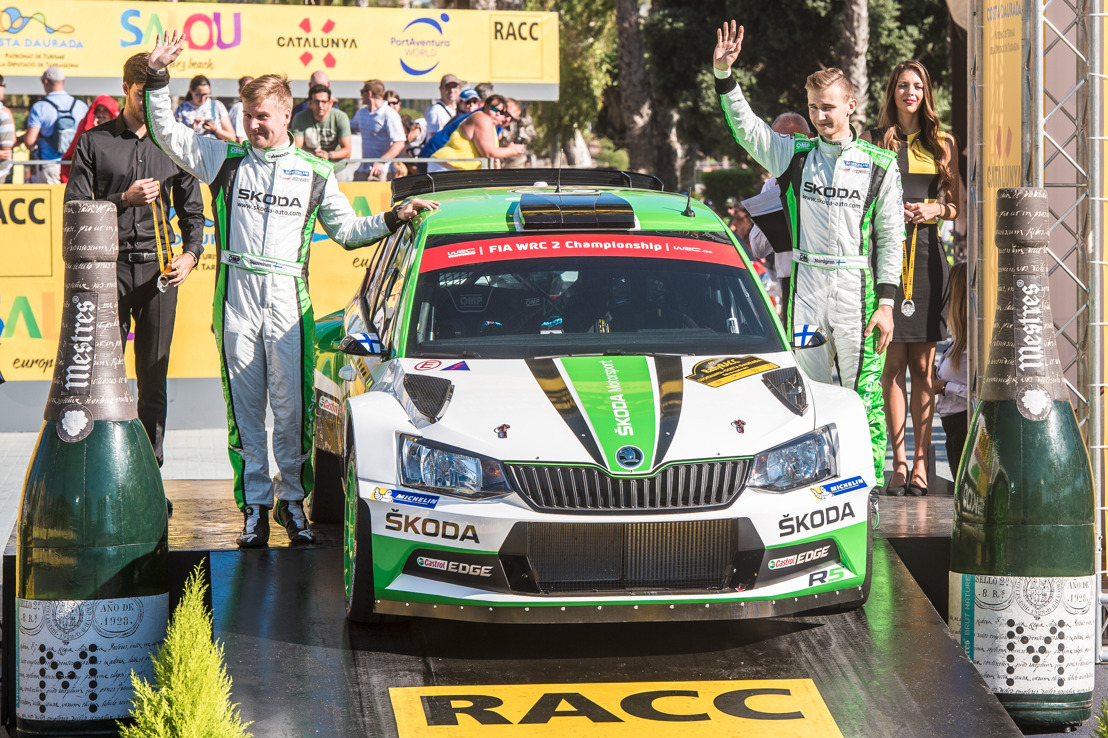 The final leg of the RallyRACC Catalunya – Rally de España was held over six special stages totalling 74 kilometres. The first test had to be done in the dark, and ŠKODA Motorsport’s Jan Kopecký drove the fastest time in WRC 2 category, followed by his young Teammate Juuso Nordgren. The 2015 Finnish Junior champion drove the ŠKODA FABIA R5 on tarmac for the very first time adapting himself more and more to the fast roads in Spain. When the sun finally shone from the beautiful Catalan sky Kopecký continued to collect fastest times. In the end he had won every single tarmac stage of the rally, achieving 14 stage wins in a row – including a spectacular second fastest time on the Salou show stage ahead of a dozen more powerful WRC cars.

Without the time loss suffered on Friday, when he caught the car in front of him and had to complete the last part of the stage in his competitor’s dust losing over one minute, the Czech Champion would have fought for victory. In total he won 14 out of 19 special stages. "I am still disappointed by the decision of the stewards not to give me any compensation for the time I lost without my fault. But that’s life, I nevertheless enjoyed the rest of the rally. I think that I and Pavel could prove again, that the ŠKODA FABIA R5 is the fastest car of the WRC 2 category. We made no mistake and are happy with our performance," concluded the multiple Czech Champion.

Their young teammates Juuso Nordgren/Tapio Suominen defended fourth place during the final leg. Driving the factory team’s ŠKODA FABIA R5 for the first time the two Finns showed an impressive performance especially on the tarmac stages. "I am happy with the rally and the progress I could make throughout the event. I have to thank the whole Team of ŠKODA Motorsport, that they put so much faith in me and gave me such a fantastic rally car," commented a delighted Nordgren at the finish.

Competing in RC2 class Ole Christian Veiby and Stig Rune Skjaermoen (NOR/NOR) were not registered to score points in WRC 2. Driving a ŠKODA FABIA R5 entered by the private Printsport Team they nevertheless delivered a stunning performance, finishing third behind the factory car of Jan Kopecký. "I studied the inboard footage of Jan to learn from his driving style. He was incredibly fast and I know that I still have to learn a lot about tarmac," confessed the Norwegian rising star after his impressive performance. Veiby, who is still in the title fight in the FIA Asia Pacific Rally Championship (APRC) with MRF ŠKODA Team, will join the factory team of ŠKODA Motorsport alongside newly crowned WRC 2 Champion Pontus Tidemand and young Finn Juuso Nordgren for the upcoming Wales Rally GB (26 – 29 October).

"Jan proved that he is currently one of the fastest drivers on tarmac. Juuso already paid back the trust that has been placed in him", concluded ŠKODA Motorsport boss Michal Hrabánek at the podium of the RallyRACC Catalunya – Rallye de España in Salou.

Current standings WRC 2 after 11 of 13 rounds

On Saturday and Sunday ŠKODA Motorsport’s Jan Kopecký was the fastest competitor in WRC 2 on 14 stages in a row. Nobody in WRC 2 could beat the reigning Czech Champion on the tarmac roads of Catalunya.